Here is a handsome notice which stands at the entrance to St Marcella’s (Llanfarchell) Parish Church on the outskirts of Denbigh.  So what is so wrong with play?  Any sort of play?  Indeed what is wrong with enjoyment on consecrated ground? 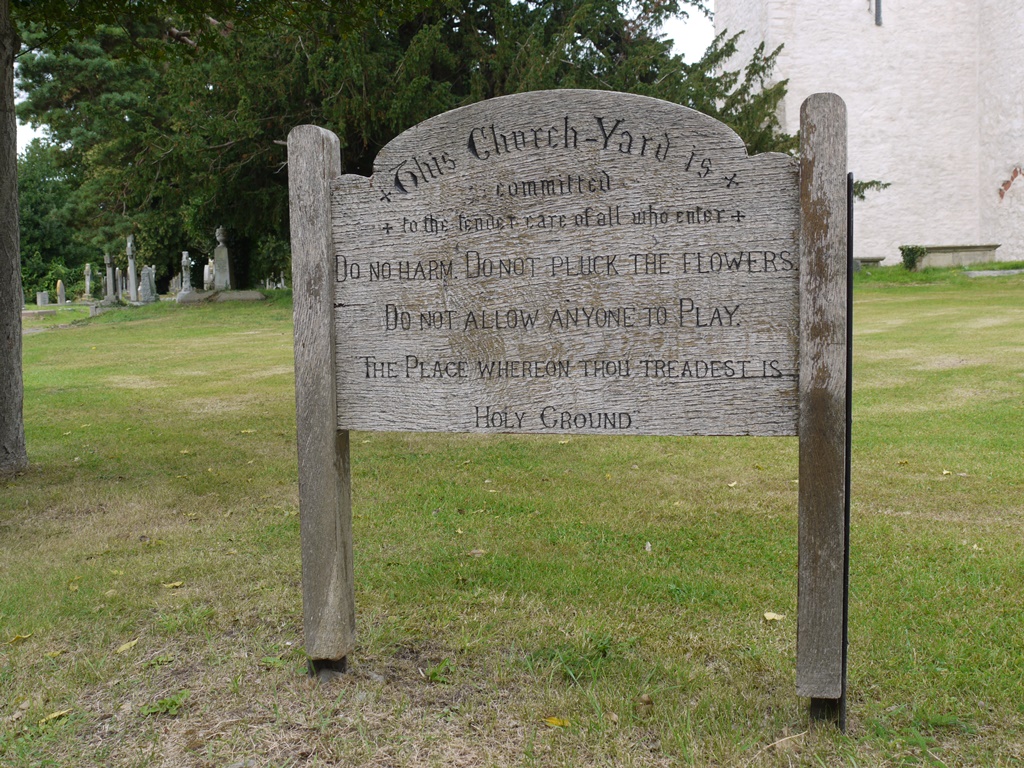 Forbidding sign in St Marcella’s Churchyard, Denbigh exhorts: DO NO HARM. DO NOT PLUCK THE FLOWERS. DO NOT ALLOW ANYONE TO PLAY 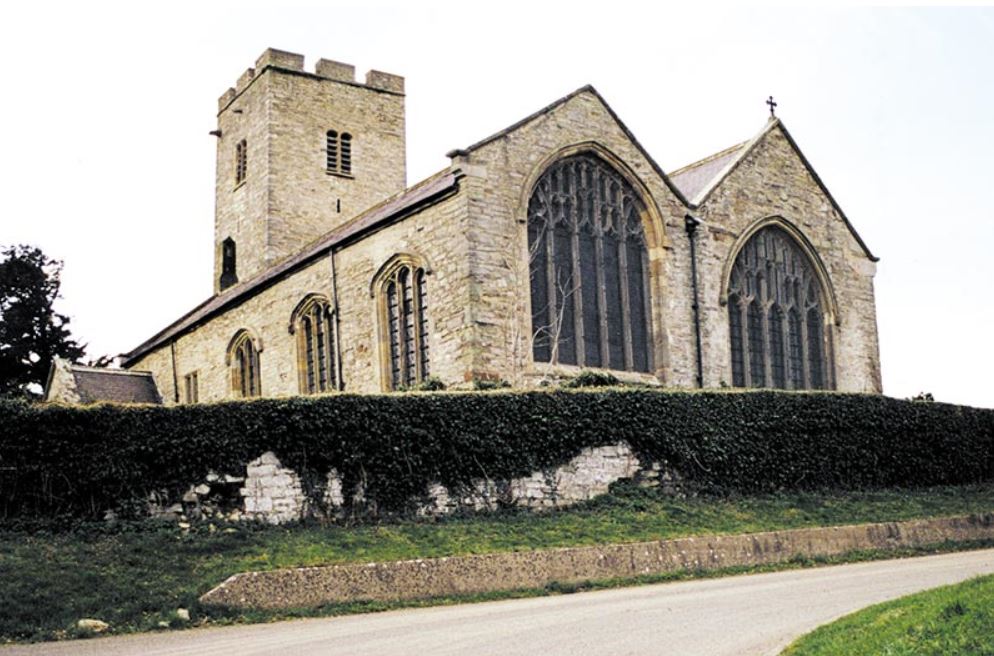 St Marcella’s Parish Church, also known as Whitchurch or Eglwys Wen is just east of the fortified town of Denbigh

It is well worth overlooking this bleak notice to penetrate this, the grandest of Denbighshire’s medieval churches.  Inside its double nave are reminders of Elizabethan exuberance and of the wealthy and fecund family whose tendrils extend to Cardiganshire, to London and to Chirk Castle. Here is a monumental brass plaque portraying Richard Myddlelton ( who died in 1575) along with his wife and their seven fashionably dressed daughters and nine sons. They are of interest to Cardiganshire historians because one of these sons, Hugh Myddleton was the first great exploiter of the Cardiganshire Mines through leases granted to him in 1617 by James I. Sir Hugh Myddleton had attracted the King’s patronage through an extraordinary civil engineering project, the construction of ‘The New River’ a 38 miles canal cum aqueduct which brought clean water into London from springs at Chadwell and Amwell through Stoke Newington and Hackney to Clerkenwell. Sir Hugh leased Lodge Park, the Gogerddan hunting lodge from Sir John Pryse, and died there in 1631.

One of Hugh Myddleton’s daughters, Hester,  became wife of Sir Richard Pryse of Gogerddan, who was made 1st Baronet in 1641. (Also see letterfromaberystwyth May 14, 2013)

Another Myddleton woman, Jane, had married the powerful Sir John Salusbury and they are commemorated after his death in 1578 by a magnificent painted alabaster tomb celebrating their fecundity.  On one side of the box-shaped tomb are nine sons, eight in armour and one a cleric, while the other side shows four daughters: two fine ladies in ruffs and two swaddled, to indicate their death in infancy. 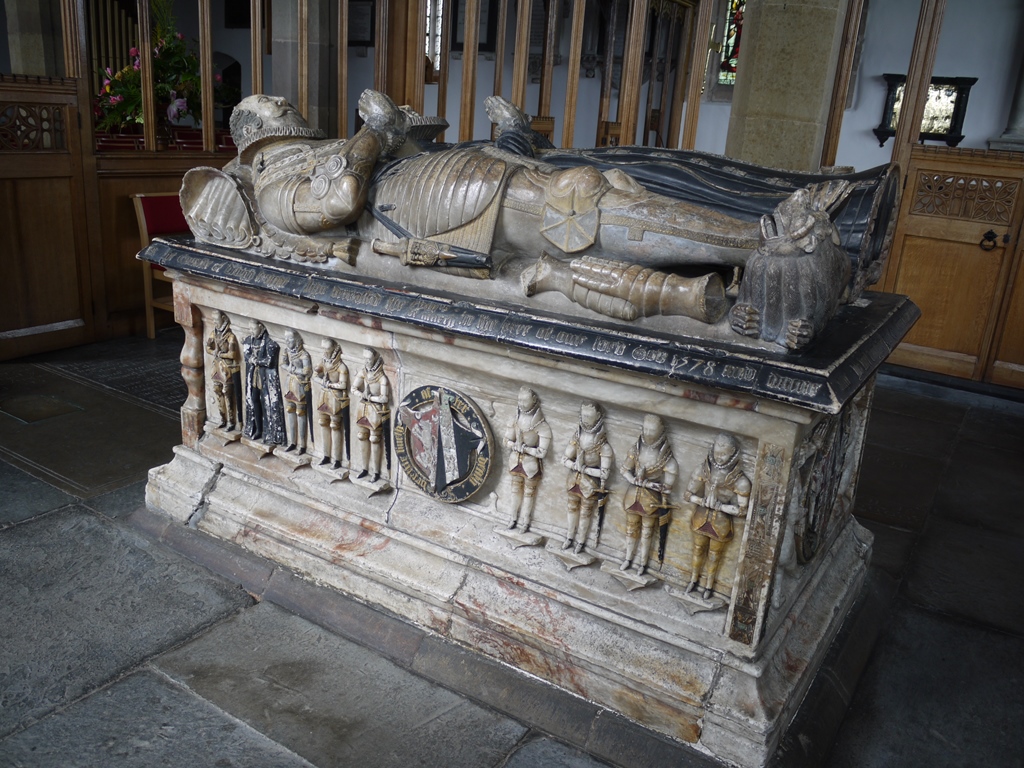 Alabaster tomb of Sir John Salusbury and his wife Jane

The life-size figures lying on the top of the tomb are meticulously represented.  Sir John in armour is equipped with sword on the right, and gloves and helmet at his feet. The hunting knife at his left is complete with a miniature knife and fork set nestled in its scabbard a sort of Elizabethan Swiss army knife!  His wife in her high ruffed dress lies like a doll, the soles of her feet neatly framed by the ruffles of her voluminous petticoats. 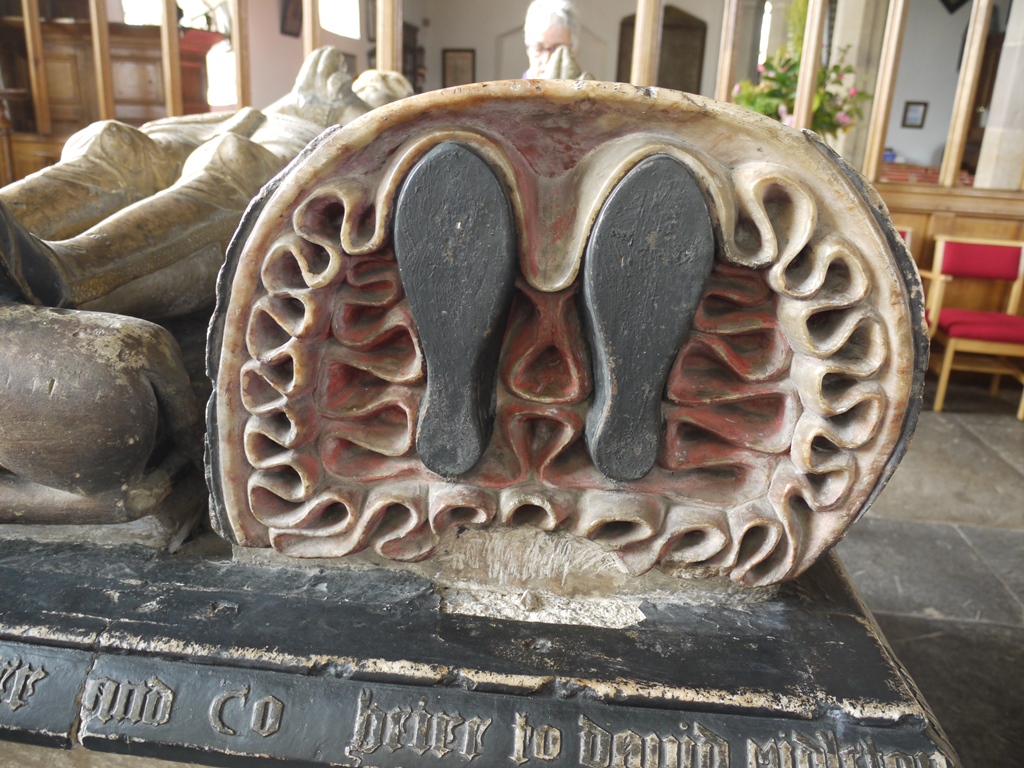 Two very disreputable fat little male nudes support the crest in the panel at her feet.  I’d like to know more about what these figures represent.  They look very playful ( and not at all holy)  to me. Perhaps someone among my readers can throw more light upon these ugly little men. 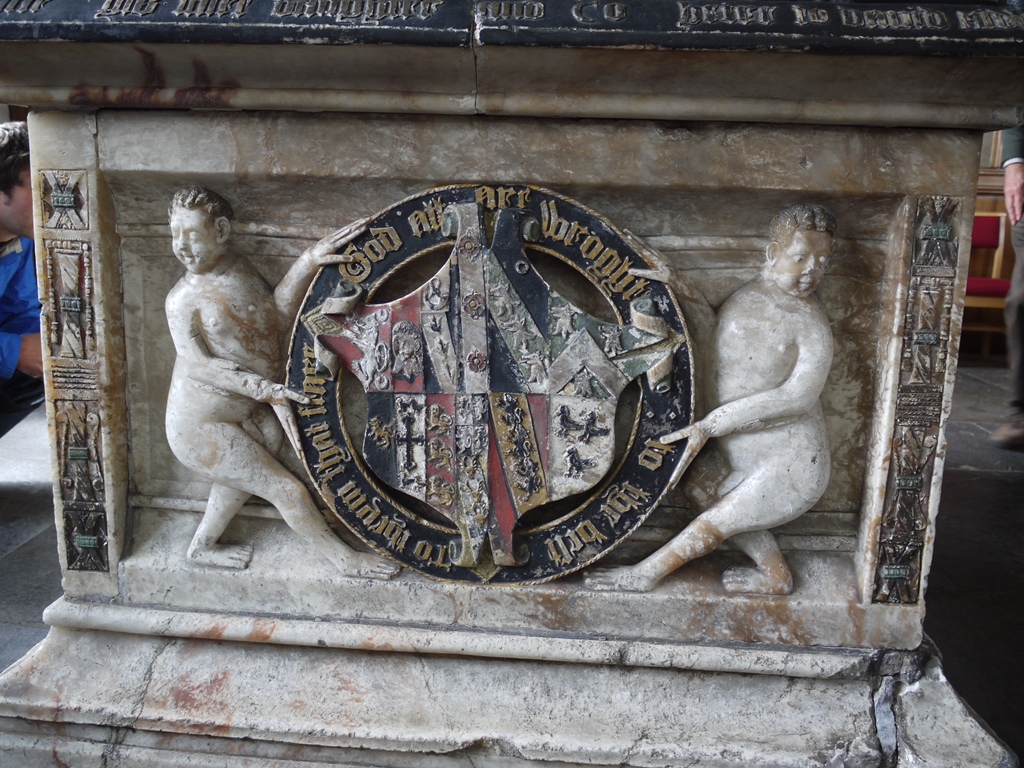 At the foot of the tomb, the family crest is supported by two fat frolicking hominids

More images may be found at  http://medieval-wales.com/site_31_denbigh.php