Yesterday we went to the Teifi Marshes – because we could!   Although it is hard to fault Pendinas, Tanybwlch  and the cycle path for its birds and flowers, the freedom to travel lured us to the south of the county, to the Cilgerran Gorge and to the Welsh Wildlife  reserve which is bisected by the former railway line to Cardigan.  The golden reed beds and the hides are spread out to view below  the ring road, but approached from the visitor parking, the traffic is too far away to be audible. 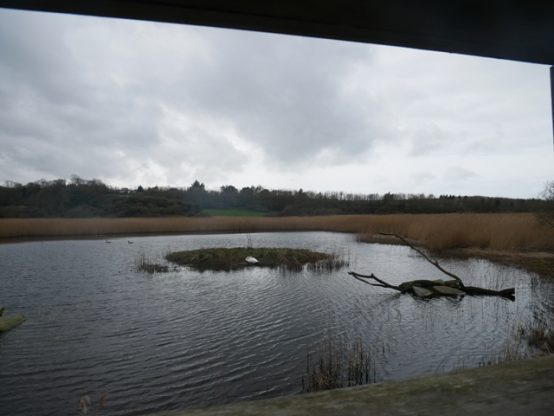 Teifi Marshes. A view from the hide

I heard my first chiffchaff of the year in the alders beside the path.    The first of the three hides has regrettably been destroyed by arson during lockdown.  Only the charred timbers of the frame remain.  But the birds on  the pool it overlooked were remarkably unperturbed by passing visitors.  A little egret stood on its silly yellow feet occasionally snapping up  small morsels in the water.  A couple of dozen teal sculled around, already paired off and thinking about the spring.  The drakes are so  beautiful with the iridescent  green comma on their chestnut heads, and their immaculate grey speckled flanks.  The ducks are plain  coloured for camouflage on their nests, but flash the same metallic green from the speculum,  the secondary flight feathers on the wing.

At the second hide we watched a curlew patiently probing the mud beside the now empty tidal channel.   There was very little else  to see, until  a sudden treat, the unmistakable long-tailed form and grey barred body of the first cuckoo flying low over the marshes.  We didn’t hear it call.   Perhaps it is as yet a little too early to start seeking out reed bunting nests.

As we approached the third hide were suddenly buzzed by a squadron of sand martins,  a flock of forty or more birds hawking low over the reeds almost skimming our heads.   These too are fresh arrivals, feeding as a flock, not yet involving themselves in the serious business of egg laying.  And amongst them there was one ( or possibly two – so fast did they swirl above us) swallow.   We all know that one swallow does not make a summer.  But it is certainly a start.  And I read that someone saw one at Mwnt yeterday as well. 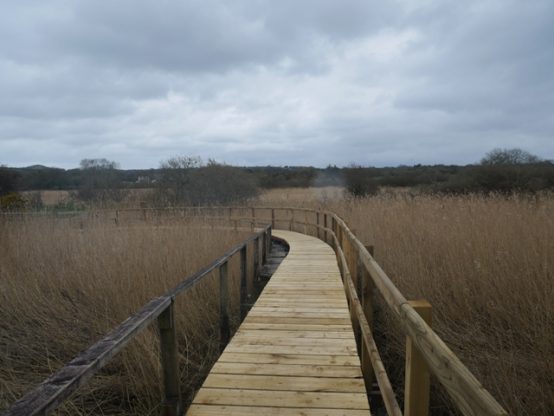 I strongly applause the Wildlife Trust for the management of this reserve.  Clearly over the winter they have been very busy replacing decaying boardwalks to the hides, and both of these were airy and safe with the windows all opened wide.  Walkers and birdwatchers, and many families with children and dogs were out enjoying the open space.  A contrast with my other planned destination, Cilgerran Castle, an outdoor location which is equally cold and well ventilated, but which the National Trust has seen fit to keep firmly closed to visitors.

As I write this, I find that during my absence yesterday my own chiff-chaff has also returned, and is flicking around between the lawn and the shrubs outside my window. So there will soon be be its relentless song from the tops of nearby trees declaring summer.