An old photograph showing the building of The Castle Hotel, now the Old College, Aberystwyth, recently came to my attention. 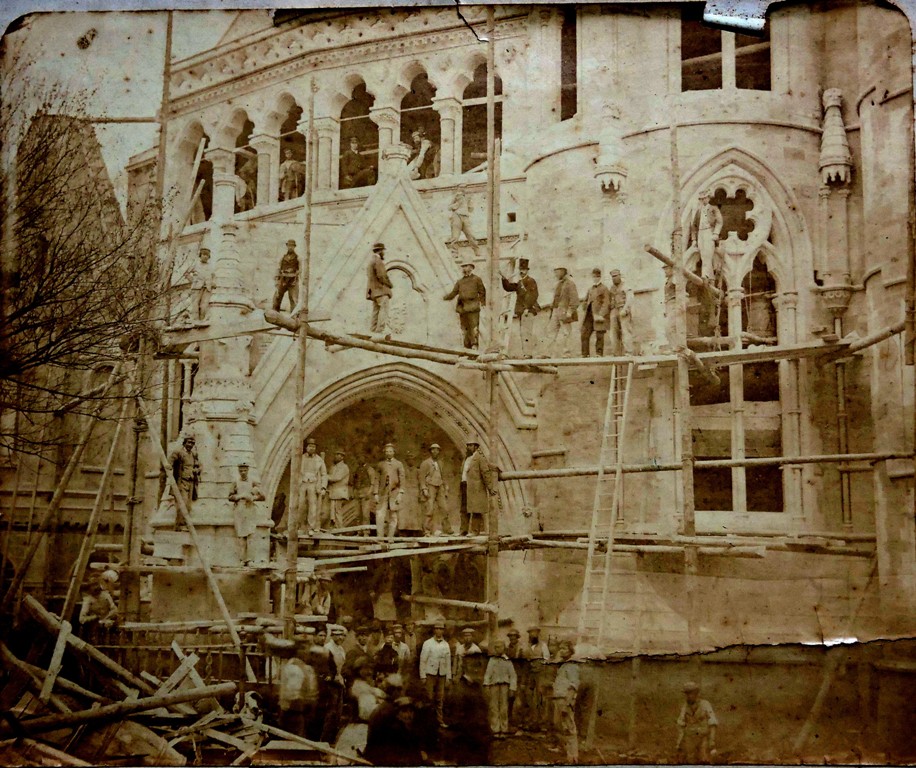 MichaeI Statham, an indefatigable quester among archives, found it in the archive held by William Michael Clarke a civil engineer and the fifth generation descendent of the Llandaff mason who worked on Thomas Savin’s short-lived Castle Hotel at Aberystwyth.

I am told that Edward Clarke mason/sculptor was active 1835 to 1878.  He was followed in the business by William Clarke (active 1871 – 1915 mason/sculptor)  then Thomas Guy Clarke (active c1900 – 1942 quantity surveyor and designer) then another William Clarke (builder) and now William Michael Clarke (civil engineer) who is the last in line – the firm will cease to exist when he retires.The archive also contains photos dating from Edward Clarke’s time  of  Llandaff cathedral and of Ettington Park, Warwickshire.   Clarke worked with Llandaff architect John Pritchard on both, and J.P.  Seddon was, at the time Prichard’s partner.
I find that the Aberystwyth photo is already well known, an identical copy existing in Aberystwyth University Archive and reproduced in a recent pamphlet Yr Hen Goleg/The Old College by Elgan Philip Davies (Gomer 2011).  In it Davies writes that the haste with which the building was being constructed, by 500 men directed by the architect J.P. Seddon, meant that form of the port cochere or carriage porch  was the result of builder’s initiative as there were no plans available when they commenced work.  J.R. Webster, in his book Old College Aberystwyth (University of Wales Press 1995) however states that the unusual  triangular footprint of the porch was adapted by Seddon, whose initial plan was to more or less reproduce the four square porch he had built at Ettington Park.  In either case, Clarke and Seddon had common experience of the Ettington build,and there was doubtless scope for creativity by Edward Clarke. The existence of this old photo in his archive perhaps reflects the pride which all took in this ornate entrance.

Close scrutiny of the picture reveals the precarious nature of the timber scaffolding of the day and the presence of at least three gentlemen whose clothing depicts their higher status.  It is pleasing to guess that the two top hatted gentlemen on the upper and lower platforms might have been J.P. Seddon the architect and Thomas Savin the entrepreneur who bankrolled the hotel.  But there is another figure, a decidedly dandified young man in pale trousers and waistcoat, balancing on a single pole to the right hand side of the picture.  Who I wonder was he?

Could this be Thomas Savin? 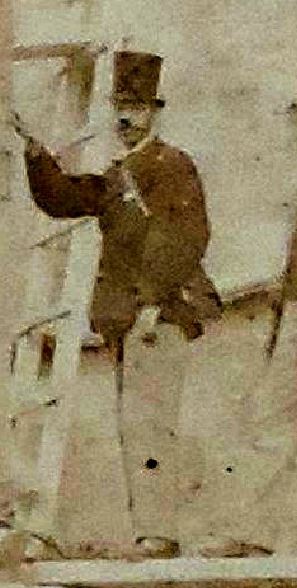 Could this be J.P. Seddon? 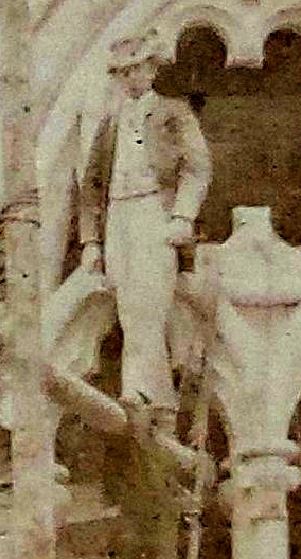 And who is this elegant young man?

The Castle Hotel opened for business in June 1865 still unfinished, and closed a year later due to insolvency.  It was then acquired for £10,000 in 1867 to house the University College of Wales.  Today it is somewhat forlorn, the University staff occupants have largely fled, relocated to the main campus on the hill and ambitious proposals are being discussed for its future refurbishment and use.  But its massive ornate bulk is one of the defining features of the town and for many, a symbol of the pioneering beginning of University education in Wales.