Another independent shop has closed its doors in Aberystwyth’s picturesque Eastgate Street. The windows, masked in brown paper give it a depressing  air. 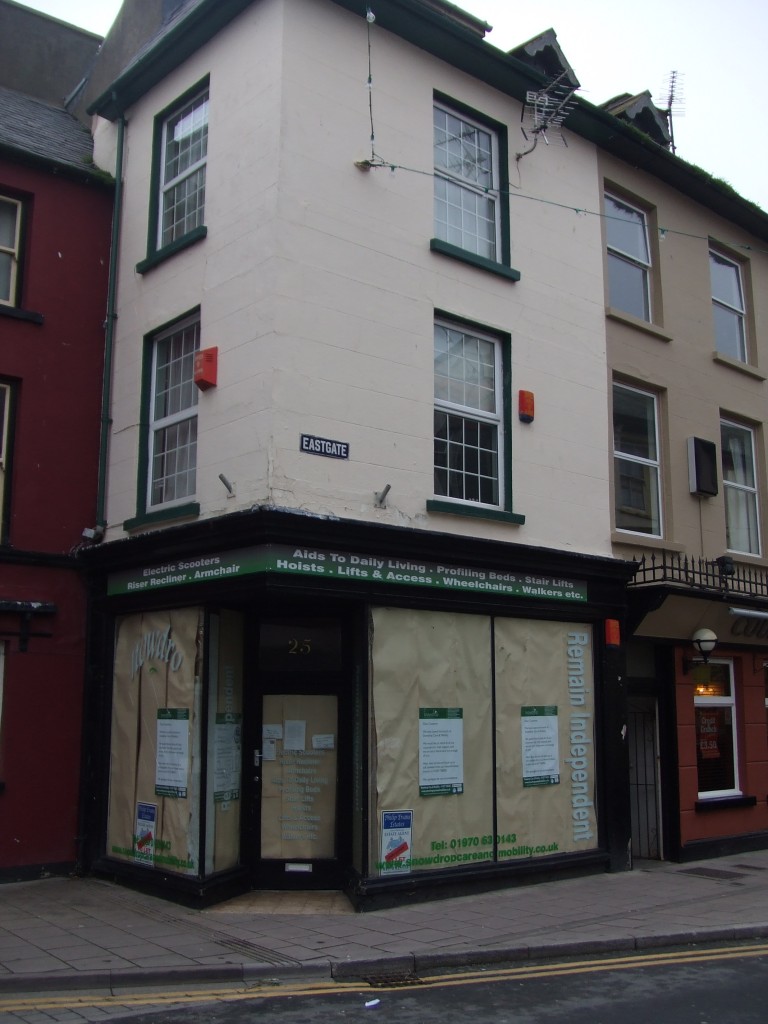 However the message posted to the customers gives pause for thought, for it reads “ We would like to thank all our customers for their support and we are sorry there were not enough of you”.

Snowdrop Care and Mobility sold walking aids and wheelchairs, lift-and-recline chairs and beds, mobility scooters, ramps, stair-lifts, continence aids and extra wide footwear for swollen feet.   Not equipment many of us are eager to need. Can we conclude that Aberystwyth’s population is, in the main, ageing more healthily than the commercial predictions suggested?  I hope so.   Certainly there are plenty of the elderly out and about leading busy lives.

Those less fortunate, it is implied (and I hope there are not too many of them) will have to shuffle off to Haverforwest  ( a round trip of 125 miles).   On the other hand they may resort, as we all increasingly do, to doing their shopping on the internet.  I understand that an extensive range of this equipment can be obtained through Lloyds Pharmacy. 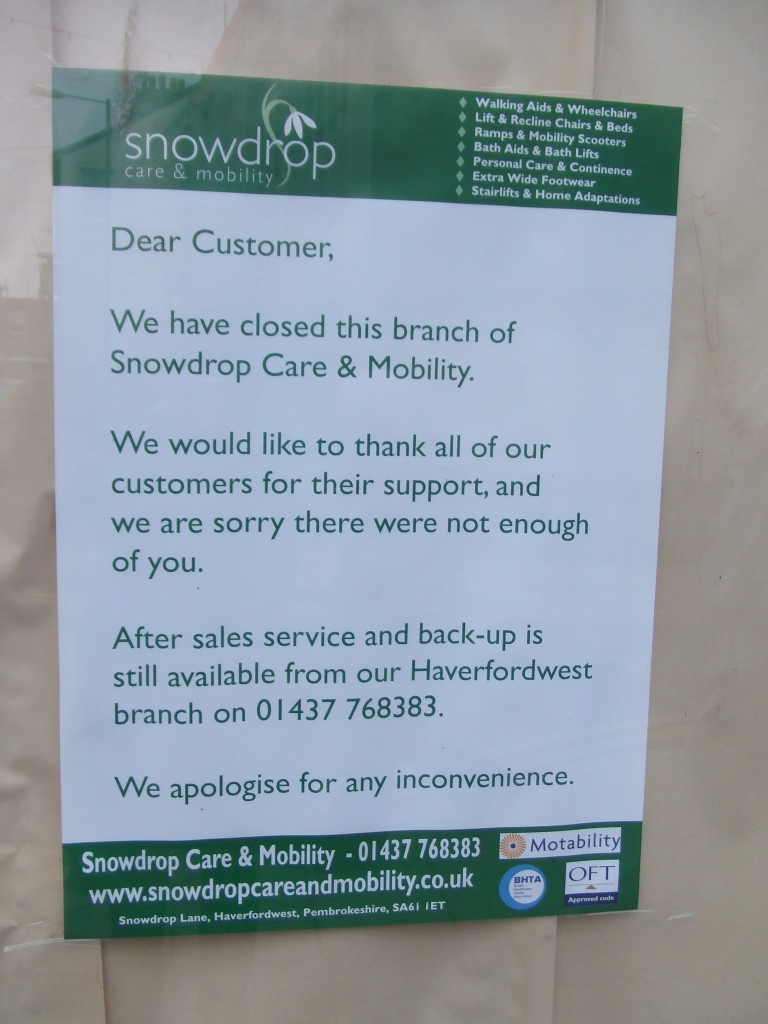 A reproachful notice to customers of the now-departed shop

My mother was never considered to be suffering from Alzheimer’s disease.  Indeed her death certificate (for she died, a week ago, aged 94) has a slightly farcical ring about it.  Her certified causes of death are Hypertension, Old Age and Memory Loss.  It reads as if she just forgot to go on living.   More likely vascular dementia played a part.  Abnormalities of this sort were detected in a brain scan about seven years ago, and her final years were marked by a number of TIAs (Transient ischaemic attacks) or mini strokes, from which she usually physically recovered, though there were new lapses in memory and ability.

But what is more striking than what she lost is what she retained:  an iron certainty that she was right, and that the only way of doing things was her way.  In my last blog this certainty applied to the control of the items on her overbed table and to her method of achieving quality control on her diet of chocolate buttons.

Here she is five years ago in another white-knuckle account I wrote then:

I have searched every chemist in town for a small-headed Maclean’s toothbrush like the worn one I have been compelled to carry around in my handbag for the last week.
Eventually I go to the dentists’ and queue to ask if they have any of these toothbrushes (this is where Mummy says they come from, – but because they are no longer on visible display she did not ask for them when she went to the dentist last week). They sell me an OralB small-headed toothbrush which is very similar to the Maclean’s one. The assistant has worked there for eight years. She is quite definite that they have never sold Maclean’s toothbrushes.

I took the toothbrush round to my mother and handed it to her.
She gazed at it and laughed merrily.  “Ha,Ha, ha, ha, ha, ha.” She chuckled.

I couldn’t muster such a cheerful peal however hard I tried.
She drew breath and laughed again.
“What,” I asked calmly “is so funny about it?”
“Oh, I’ve never seen one like it!” she replied.

I point out its similarity to her present Maclean’s tooth brush, which I fetch from upstairs. The small head is exactly the same size. The handle has one blue flash rather than three diagonal stripes. The handle, she says is very long. She has never seen such a long toothbrush.

I hold them side by side:  once you subtract the packaging, the two toothbrushes are exactly the same length.
So now we come to the bristles. This new toothbrush has the tufts of bristles cut on a slight diagonal so that they are longer at the front. The toothbrush she has just started using has them cut square. The manky brown-stained ex-toothbrush in my handbag has alternate pairs of long and short tufts.

But I can tell, it is not, and never will be, satisfactory. I tell her that the assistant at the Dentists’ says that they never did stock Maclean’s toothbrushes. She shakes her head emphatically with a knowing grin. She knows when she is being told a whopper.

Was this a symptom of dementia?  Or was she just being herself? 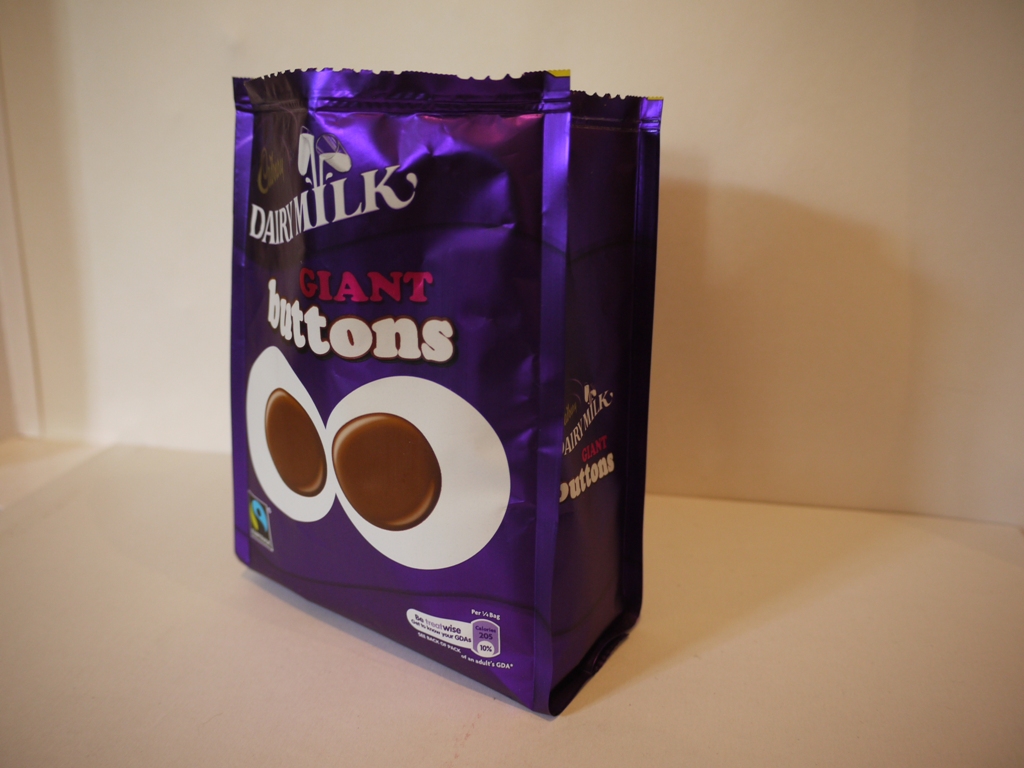