I am startled by the brutality of reviewers writing for The Spectator in the 1860s.  I had been browsing in search of reaction to the publication of a volume of poems by George Powell, and  I soon discovered that the flavour of poetical criticism in 1861 – 1862 was stinging indeed.

In August 1861, for example, I found a long review of poems penned  by a clergyman.  “The Rev. John Graham has done a very foolish thing in ever devoting an hour from his time to writing verses. He has done an infinitely more foolish thing in venturing to print them. He ought never to write without burning all he writes as soon as it is written………..  We close Poems: Sacred, Didactic and Descriptive in bewilderment and dismay”.

Another new work, Athelstan, A Poem by Edward Moxon received similar derision “ Mr Tennyson may sleep secure. His laurels are still safe….. Whatever else he may be, the author of Athelstan is certainly not a poet, either by birth or manufacture”.

A review entitled Poetry Tearful and Tremulous discussed two new volumes: Cypress Leaves by WHCN (an Etonian) and Poems by Ingle Dew BA. “—we re-iterate our hope that these remarks may induce Mr Ingle Dew BA, and WHCN to feel heartily ashamed of their literary escapades and to attach for the future as little importance to the twitterings of their own emotions as those exceedingly few persons who will read their work are certain to attach to them.”

Aspirant poets must have retired to sob at such a drubbing.

George Powell, was amongst these poets.  The son and heir of Nanteos mansion he was, like WHCN, an Etonian and by 1861 an undergraduate at Brasenose College Oxford.  He had already published in 1860, at his own or more probably his father’s  expense,  a collection of five short stories which as far as I am aware never received critical attention.

George Powell first published a small volume of 31 poems, entitled Poems of Life and Death in 1860 under the pseudonym Miölnir.  His epilogue excuses any deficiencies in the light of his own youth and inexperience.  However he leads the reader to his cause:  “First attempts are in all cases, even those of great genius, defective to a certain extent. They should be regarded as, not perfect works, but a foreshadowing of perfect works or more perfect works: as exercises not as models, as footlights not as stars”.  He signs off as Miölnir, Brussels, December 3rd 1860, and before the year was out a slim book with a dark green embossed cover was printed for the author by J Cox of Pier Street, Aberystwyth.  Perhaps it was distributed as Christmas presents. 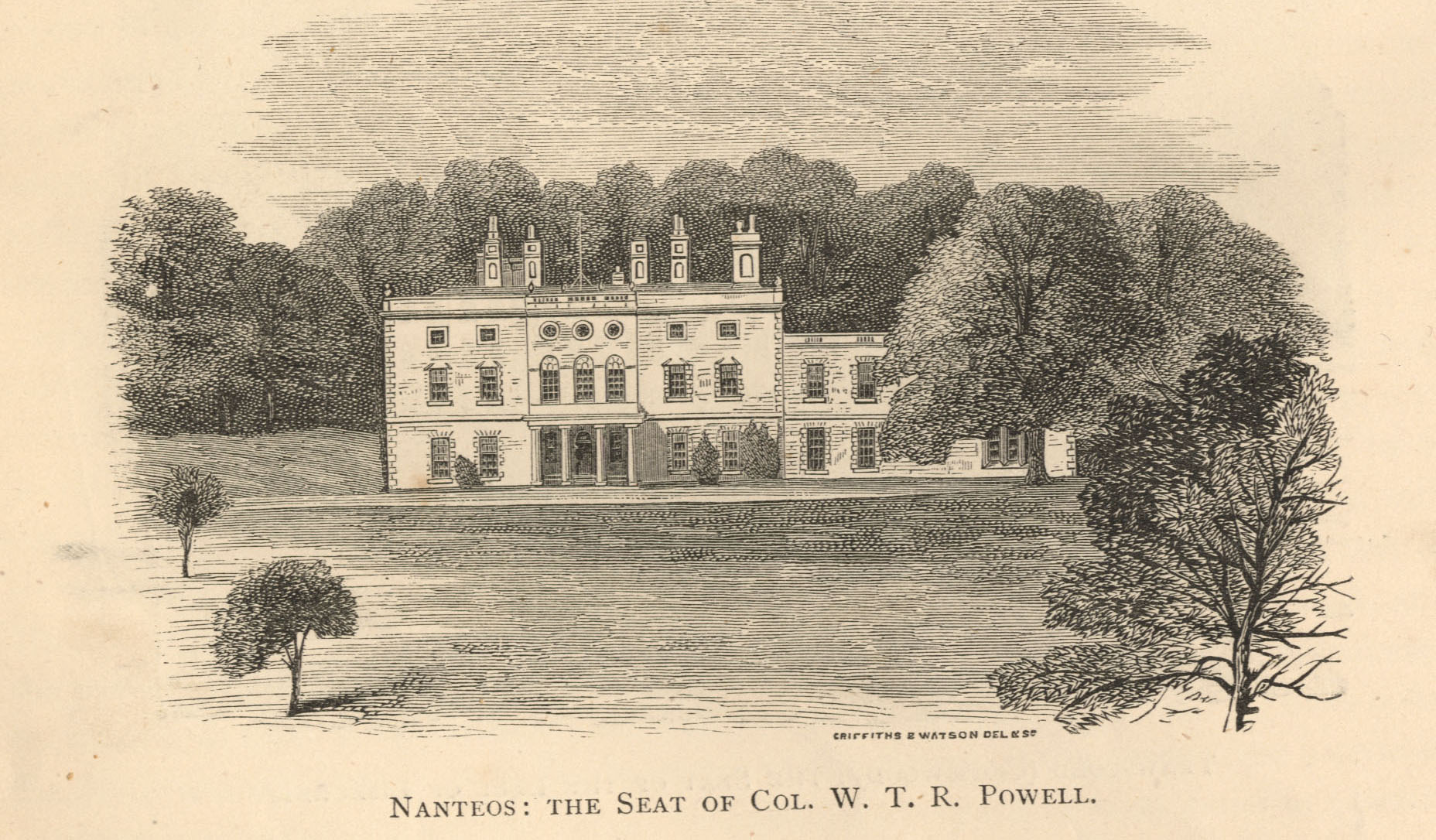 Nanteos, portrayed in Nicholas’ Annals and Antiquities of the Counties and County Families of Wales 1872

A  second volume was  soon under way, arranged in four parts with many personal dedications, most significantly part 3 to the poet Longfellow, whom he did not know, but admired from afar.  The final poem added only in press was an elegy to the Prince Consort who had died on the 14 December 1861.  The second volume was signed off on 20 December 1861, and appeared in a cream cloth binding.

There were also some copies in which both parts were bound as a single volume.  One such copy went to The Spectator, and another was posted with the compliments of the author, Miölnir, to the poet H.W. Longfellow at Cambridge, Boston, Massachusetts. 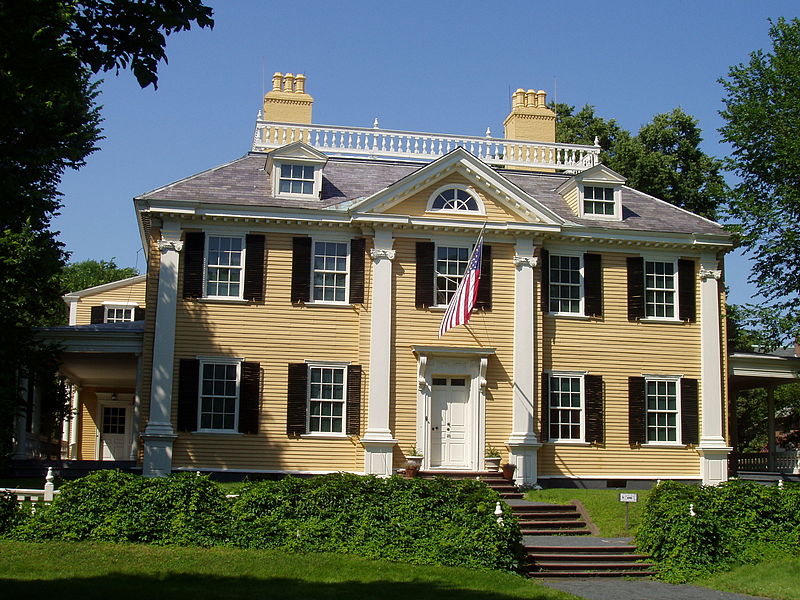 A third of these combined volumes has found its way via the second hand trade into the hands of Mr Arthur Chater. 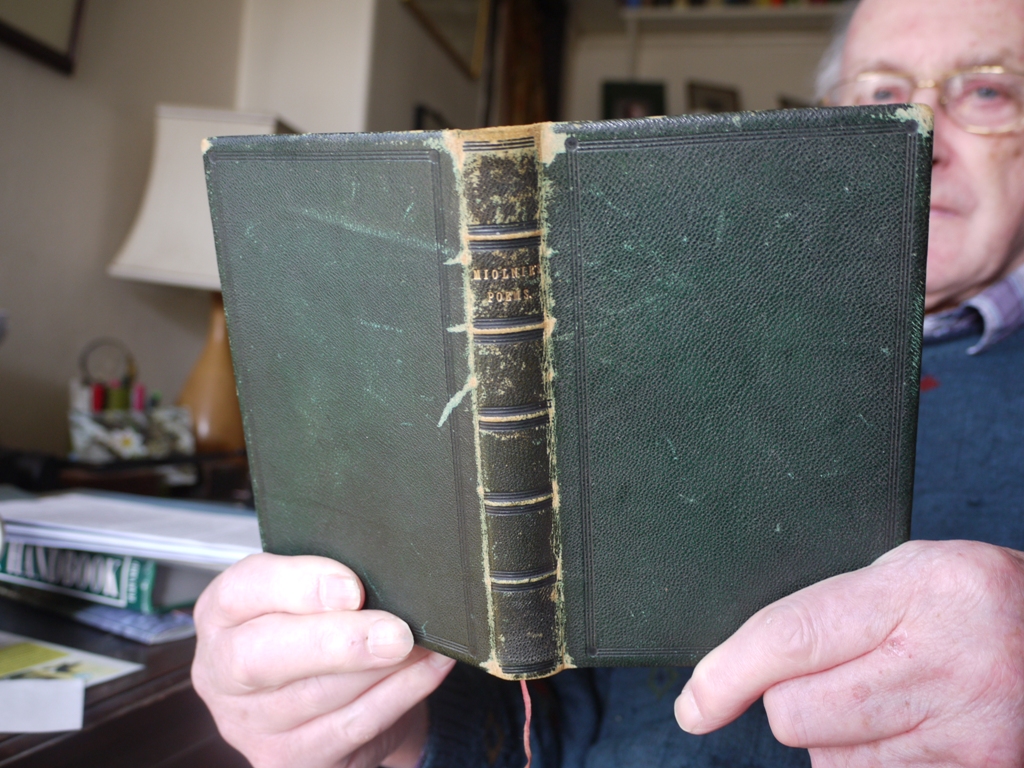 This is a puzzling volume, for on the title pages of both the first and the second series of poems is a dedication, “GEJ Powell with the best love of the Author, Miölnir” 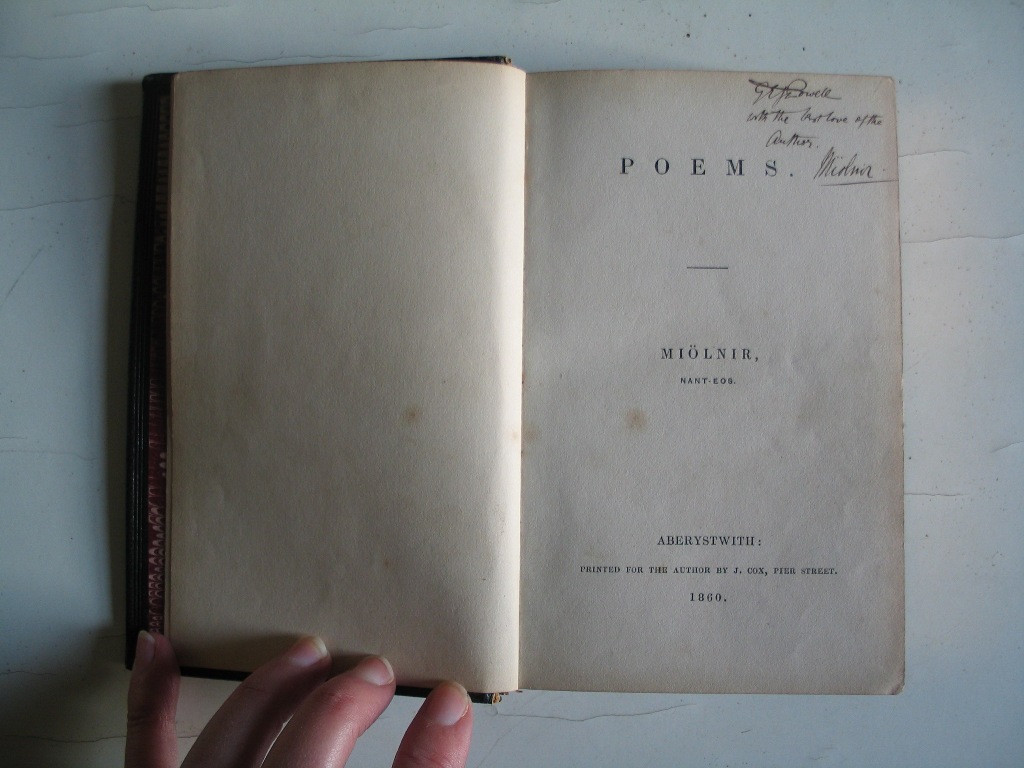 Poems by Miölnir, the dedication at the beginning of the first volume

and “George EJ Powell with the best love of the Author” 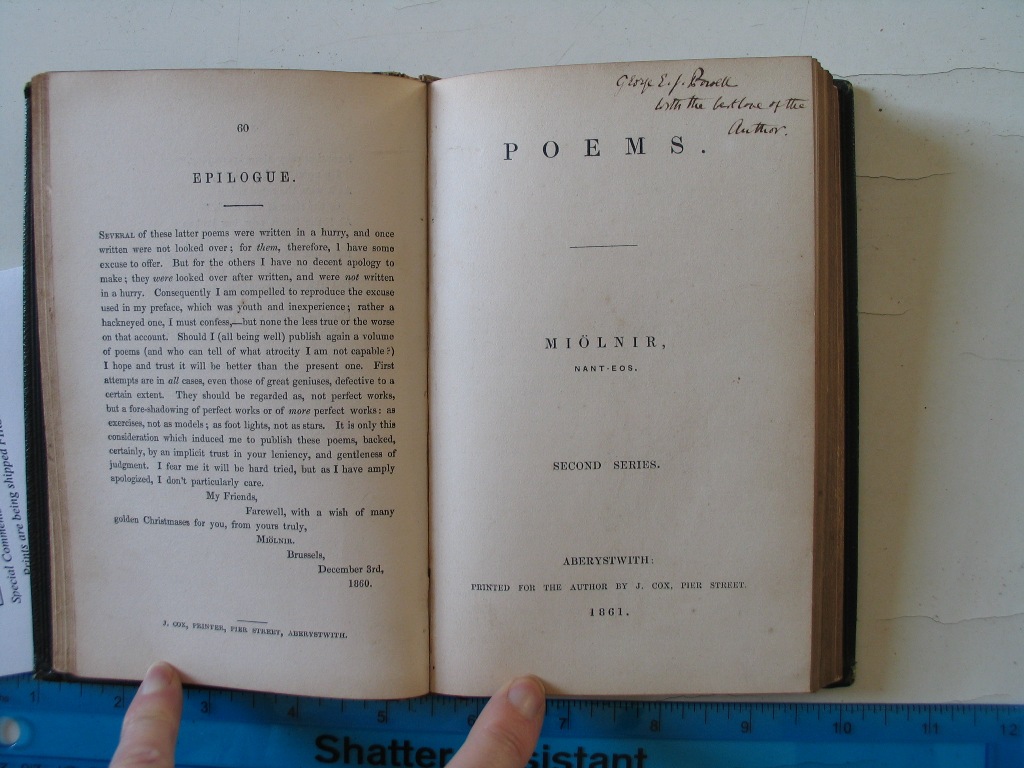 The handwritten dedication from Miölnir to George Powell

A comparison of the handwriting with that of George Powell’s letters to Longfellow confirms that it is in the same hand.  George Powell, perhaps in order to be able to claim close acquaintance with his alter ego, was in effect sending himself his love!

On 1 March 1862 Powell must have opened The Spectator with keen anticipation.  He read as follows;

“The premature mild spring weather is bringing out the minor poets, and ere long the cuckoo will be heard in the land. The most pretentious of verse makers is Mr W.C. Kent—- Though it may not be necessary that the driver of fat oxen should himself be fat, it is at least necessary that the writer of poetry should be something of a poet – which Mr Kent decidedly is not.  A more feeble, but at the same time a far more modest versifier is one who assumes the pseudonym of Miölnir.  Indeed his only merit is the negative one of self abasement, which he carries to the extreme point of simplicity.  He is evidently an amiable and ingenuous youth, whose naïveté and genuineness of character will command many friends, too staunch to be alienated by the meagreness of his poetic faculty.”

Powell  was obviously smarting when he wrote  again to Longfellow on 14 March 1862. “ I most unwisely sent it to The Spectator for review, a thing I ought never to have done with a work printed for private circulation”.  After a prolonged account of the review and its limitations he concluded  “ I will not trouble you with a long account of my petty woes, which I have quite recovered from” .

Clearly he had not recovered his composure at all and wrote another long letter to Longfellow in June. “ being compelled to leave Oxford by continued ill health,  and perpetual gloom and low spirits, the former induced, I believe, by the damp unwholesome air, and the latter by my insurmountable distaste for members of the College by whom I found myself surrounded – I wished for as complete a change as possible so came here [to Reykavik].

The following January George was back at Nanteos but the injury was still very much on his mind. “ Six or seven months have toned down wonderfully even my limited admiration for my own poems in so much that I now look with loathing upon that last volume…..  If I had only attended to Horace’s ‘Nonum prematur in annum’ I should have been spared the mortification of exposing the weakness and folly of my mental childhood.  May I entreat you to burn the volume of Miölnir’s poems and trample its ashes underfoot.”

It is not known whether Longfellow acted upon this entreaty by the humiliated poet, but clearly George could not bring himself to burn his own personal volume, so affectionately dedicated to himself.  He published no further poetry but found a new outlet for his writing as a translator of Icelandic sagas.

Footnote: Nonum(que)  prematur in annum  translates as Let it ( your first draft) be kept back from publication until the ninth year.