My dog and I have enjoyed some splendid walks in the last two weeks, happily all within my authorized orbit, accessible from my own front door. 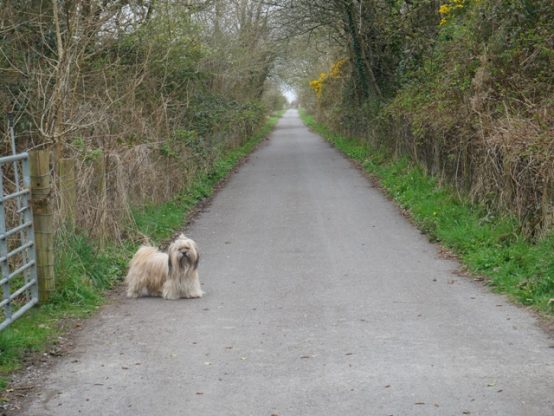 The spring has been heartbreakingly beautiful and every day brings new delights.  A fortnight ago, the first chiff chaff appeared at Tanybwlch and within days the landscape became alive with them, belting out their monotonous song from tree tops and gorse bushes everywhere I walk.  The wheatears are back in the stones below Alltwen, and stonechats and dunnocks everywhere in the scrub on the flanks of Pendinas.  Woodpeckers drum in the alder trees by the cycle path and on several days there were no less than 35 choughs probing the sloping meadow on the foot on Pendidnas.  I’ve seen kestrel, buzzard and kite overhead and a heron stalking the incipient salt marsh behind Tanybwlch beach. Today I also noticed that two Canada geese have taken up residence in the small pond below Tanybwlch mansion, and look as if they are planning on goslings.  This pond has an island which will protect them from foxes.  It is a historic feature in the landscape, formerly a public watering point on Tanybwlch flats, immortalized in old maps and a watercolour from the early 19th century. 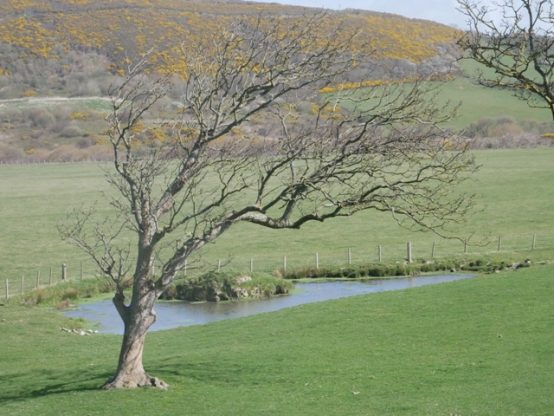 The watering hole below Tanybwlch mansion, now home to a pair of Canada Geese

The wildflowers are equally delightful, carpets of wood anemones in shady patches on the drive, celandines in the roadside banks opening their reflective golden petals in the sun, and a great  drift of primroses on the bank facing the sea near where Lord Ystwyth built his tea cottage at the foot of Alltwen.

Only very occasionally does a jet aeroplane cross the blue vault of the sky, where formerly four of five could be seen simultaneously on any clear day.  At night the consequences are obvious, the stars sharper and brighter, and venus gleaming like an unexpected streetlight over the hill. These are, as people often say to one another,  strange times, but they are not short of natural beauty.

Also strange are the consequences of ‘social distancing’, the regime to which we must all strictly adhere and which has been interpreted fiercely since the new law was hastily put in place.  First, I noticed that people became less inclined to the usual pleasantries, least they be thought to be socializing.  Dog walkers usually say good day to one another, but now other walkers often pass silently, and on a few occasions even turn around to avoid passing me.  Many familiar faces don’t seem to come along these paths at all, perhaps because they formerly drove to commence their walk.  Tanybwlch beach has always been a prime spot for dog walkers but it is now rare to see more than a couple of dogs on the whole length of the strand.

Their place has been taken by cyclists and runners, many clad in bright bespoke costumes signifying their virtuous activity.  Never before has there been such a succession of fit young men pounding along the strand and doing  stretches, squats and press ups near the primrose patch, before pounding back towards the town.  More worryingly though where are all the children?  One day I saw a mother with her three children and a dog walking beside the Ystwyth, and another day I spied a father and his two small daughters with bikes on the cycle path.  These though were rare sightings: far less than one might expect to see when all children are at home.

I do wonder whether we have gone too far with the virtue-signalling around reasons to be out of doors.  Today the police posted a picture of South Beach, Aberysytwyth on Facebook. Taken at 2.20pm it was completely deserted,  not a lone walker, not a dog, nobody at all.  The post congratulates the people of Aberystwyth  on not being there. This, apparently, is how our open spaces should look. Not social distancing but total absence is required. 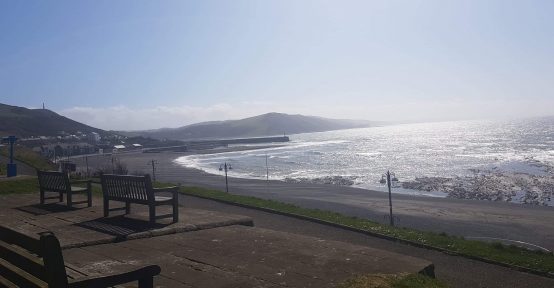 I’m glad I don’t live in the town.  The promenade and the beaches are good places to walk and get some fresh air.  Doing so, once a day, is not in fact a crime, yet possibly those who most need a walk and a breath of air now feel intimidated to do so.