A number of readers of my last blog have commented that 1923 is not especially tardy for the erection of a war memorial. The Royal Artillery memorial by CS Jagger in Hyde Park was not unveiled until 1925, and my fellow historical  blogger in the Essex village of Great Dunmow reports that their much less elaborate memorial was unveiled in 1921.http://www.essexvoicespast.com/war-and-remembrance-the-making-of-a-war-memorial/

In search of more background I spent a pleasant hour in the Ceredigion Archives http://archifdy-ceredigion.org.uk/  which afforded me the joy of inhaling the fragrance of a bound volume of 52 issues of the Cambrian News for 1923.  An experience far more evocative than scrutinising the screen of a microfiche reader.  Also, an envelope of world war I Aberystwyth miscellanea revealed several choice ephemera: an estimate and appeal for funds from the War Memorial Committee in 1921, the programme for a three day fund raising bazaar in 1923, and the programme of the actual unveiling ceremony held on Friday 14 September 1923.   I also had a trawl round the internet. 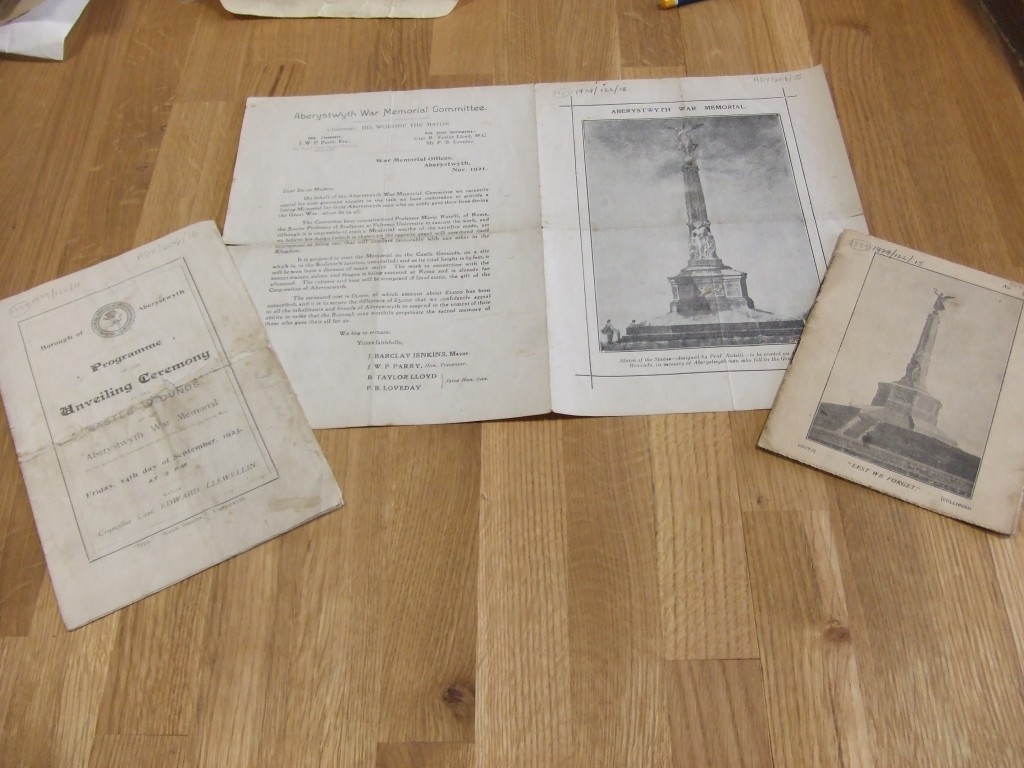 The war memorial committee handbill, flanked by the programmmes for the three day bazaar and the unveiling on 14 September 1923

The War Memorial Committee, put out a hand bill in November 1921 with an artist’s impression of the Rutelli monument.  It informs the reader that “the bronze statues, palms and dragon is being executed at Rome and is already far advanced”, while the “65 foot column and base will be composed of local stone, a gift of the Corporation of Aberystwyth”.  Actually some or all of the bronze statuary may have pre- existed the commission.  A trawl of the internet finds the identical twin of our Winged Victory in the Piazza Vittorio Veneto in Palermo, on a column designed by Ernesto Basile, erected to commemorate the unification of Sicily and Italy. It was unveiled in 1911.  She balances on the same ball as Aberystwyth’s figure, but is sited on a more ornately carved 28 metre plinth. 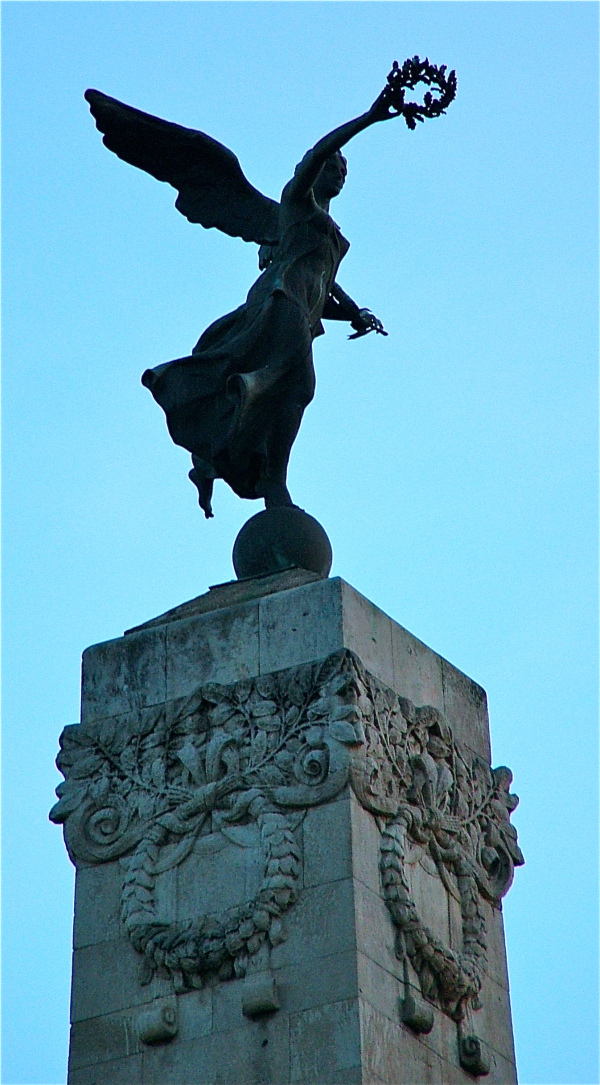 The monument at the end of the Piazza Vittorio Veneto was designed by Ernesto Basile, to commemorate the unification of Sicily and Italy. After world war I,  Victory, by Mario Rutelli was set upon the the top. 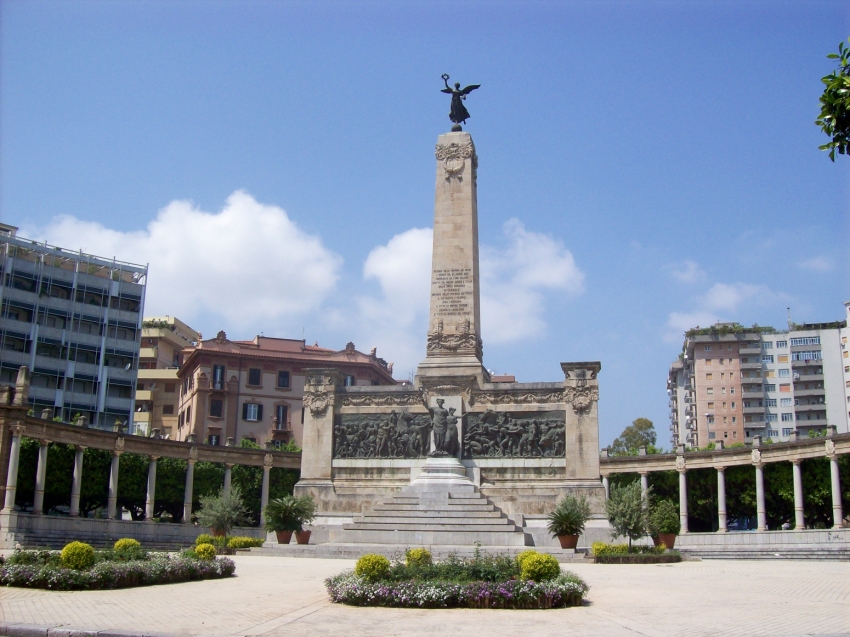 Rutelli’s Winged Victory for Aberystwyth must have been a later commission, years after Palermo’s monument was updated.This sets one thinking about our buxom Aberystwyth wench, Humanity emerging from the Horrors of War. 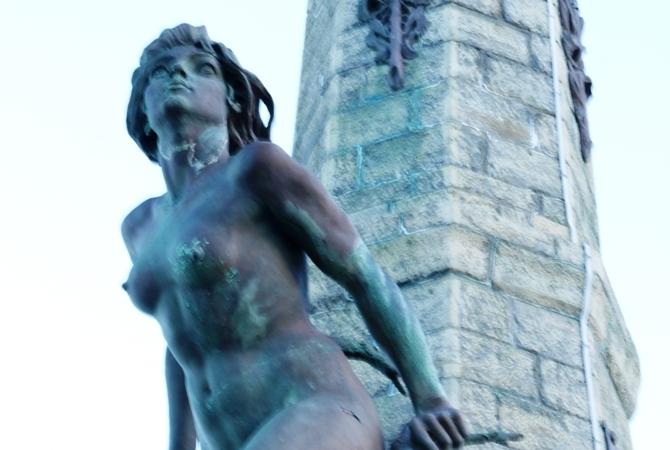 Humanity emerging from the Horrors of War, Aberystwyth

She bears a close resemblance to the girls who can be found wrestling with sundry water monsters in Rutelli’s Fountain of the Naiads in the Piazza della Republica, Rome.  When these four figures were installed in 1902 their realism and saucy image created a considerable storm.  Representing the oceans, the rivers, the lakes  and the underground waters each embraced an allegorical animal: horse, snake, swan, and strangely finned fish and they were felt to be doing so with excessive languor and or enthusiasm.The guide books assert than an additional challenge to the public morals of Rome was that the naiads were modelled upon twin sisters, high price Roman prostitutes of the day.  A fence was erected around the fountain to curtail the view from ladies who might be offended, or prevent incursions by lewd young men.

Compare the faces of the Naiad of the Oceans, the reclining naiaid of underground waters and of Aberystwyth’s Humanity.  I suspect she is one and the same girl. 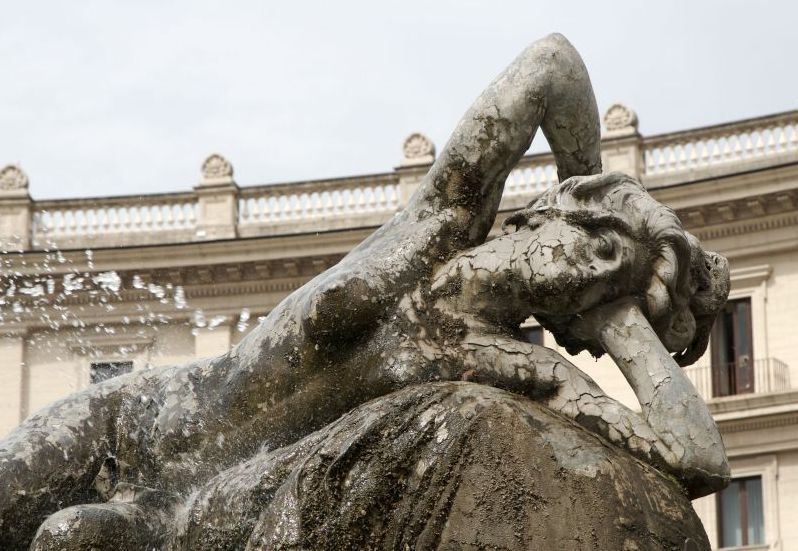 Naiad of the underground waters Photographed by Massimo Merlini 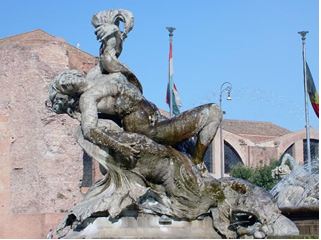 River naiad by Rutelli, in an abandoned pose

To return, though to the Aberystwyth documents:

On their handbill in November 1921 the War Memorial Committee stated that the estimate for the memorial was £5,000 of which £2,000 had been subscribed so far. The rest was slow in coming in.

The Cambrian News of 1923 shows feverish fundraising activity – for the monument was nearing completion and more than £2600 had still to be raised.  In spring there were a series of Fund-raising teas given by members of the local gentry, – in March Lord Ystwyth’s tea raised £4-14-0d, and a week later John Williams’ tea raised £4-10-0d.  But much more money was needed.

Alderman J Barclay Jenkins had, in his then capacity as mayor of Aberystwyth, cut had the first sod on the castle ground in January 1922, and remained chairman of the Memorial Committee. When the new mayor, Councillor Captain Edward Llewellin took on the post the following November he remarked that  “he was taking on a job” and would have to do his share to clear the deficit, “ for the memorial was there now, and the debt had to be cleared”.

The solution was the Three-day bazaar, held in the College Buildings, the former railway hotel which had become the home of the University College of Wales, Aberystwyth.  Lord Ystwyth, a founder of the College, presided. Daily it was opened by a different local dignitary, ( from each of whom tradition would have required a substantial donation) and the townswomen strove mightily with stalls devoted to cakes, needlework, handicrafts, knitting, flowers, and games including Finger Football. By close of business on Friday 14th September, the bazaar had raised £2,300, and with a small shortfall the unveiling took place the same day with a printed programme to mark the event. Hymns were sung in both Welsh and English.

The Cambrian News reported the facts and figures the following Friday.  One hundred and eleven names from the Borough appear on the plaques. Lord Ystwyth, “aged though sprightly, slowly mounted the steps to pay tribute to our glorious dead”.  The Cambrian News, though thorough in its reporting, expresses no opinion on the monument itself, confining itself to a series of facts and figures: the total cost of the monument had been over £7000, the 65 foot column was of stone from Ystrad Meurig Quarry, the palm leaves on its shaft each 13 foot long.  The figure of Ball and Victory was 15 foot tall, and the figure at the base 14 foot high.  No adjectives at all encompass the description.

The Italian sculptor Rutelli did not attend.  I wonder whether Humanity was actually a refugee from a pre-war ornamental commission, possibly one as a naiad?   If so, her creator may not have wished to be present to fully justify her re-assignment to so much less frivolous a purpose.