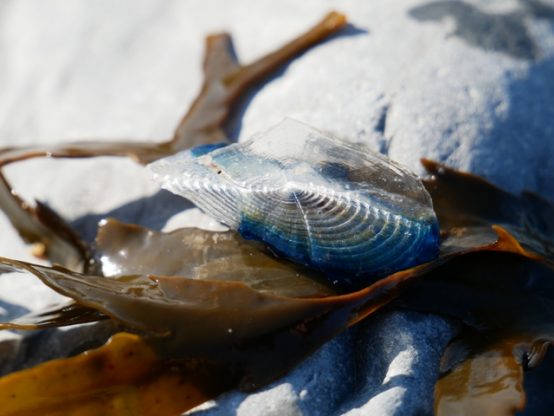 I walked Tanybwlch beach today in search of velellas, having noticed Chloe Griffith’s post on Facebook last night.  Velella velella, or By the Wind Sailor is an oceanic ‘jellyfish’, but not your usual jellyfish:  instead it belongs to a class called the Hydrozoans, and is a colonial animal made up of several different types of polyps doing different jobs (feeding, defence, or reproduction) .  Under a transparent float hang many tiny stinging polyps, which catch the plankton of the open ocean.  The diagonally placed sail projecting above the water should ensure that the float moves across the wind, and the velellas remain at sea.  It is a unique species,  there is just one kind, and they circulate in all world’s warm or temperate oceans. 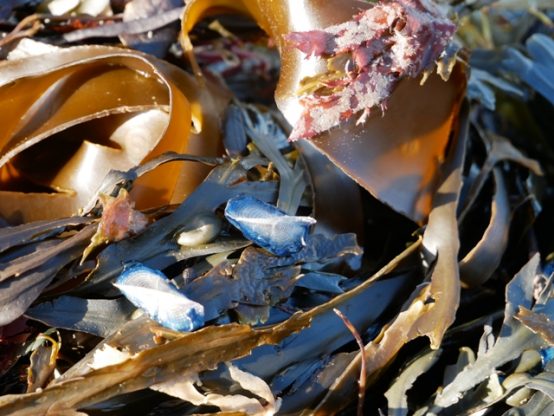 Stranded By the Wind Sailors amongst the wrack

I found them, amongst the rolls of wrack and kelp on the lower strand line, but how tiny they were!  Every one I found was just two centimeters long, shorter than a single joint of my finger. Velellas can be 7 cm long, and I have seen them this size in the open ocean, bobbing past at sea.  Our stranding of velellas are mere babies, and judging by the uniformity all started life from the same hatching. Drying in the winter sunshine they look and feel to the touch like fragments of stiff cellophane, with a hint of blue around the underside. 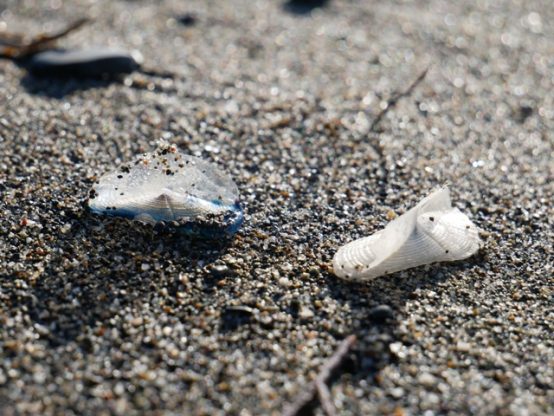 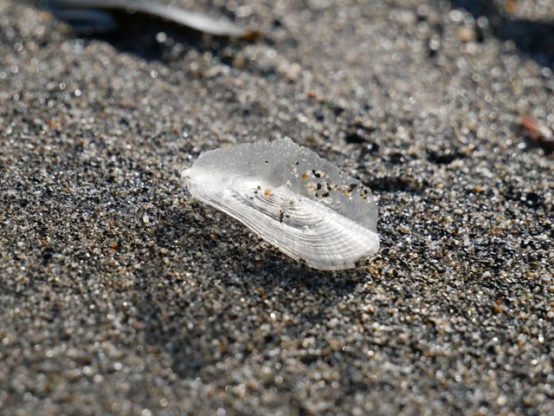 Velella velella on Tanybwlch beach, showing the projecting sail to catch the wind

It was a lovely morning, and I noted that my friend the dragon log has moved once more along the beach, and, after a period on its side and looking less dragon-like has again righted itself with head aloft.  It remains a pleasure, as I remarked last autumn, to note how very few items of domestic plastic rubbish are to be found among the driftwood and seaweed. 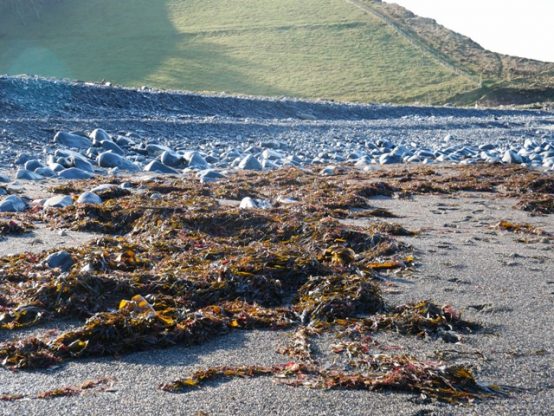 Wrack and kelp on Tanybwlch beach

There is though, a still abundant category of man-made waste,  and that is plastic rope and string.  What is it about fishermen and little bits of string?  Especially common are short pieces about 6 inches in length of green or blue plastic string with frayed cut ends.  In a short distance one can gather a pocketful, either here or at Borth or Ynyslas. 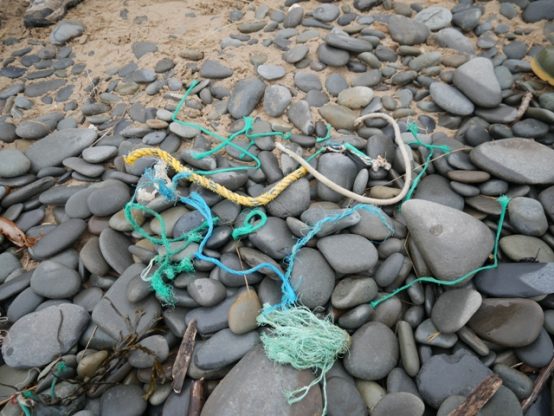 There must be an explanation.  Do fishermen tie closed their lobster pots and cut the string each time they open them? If this is the explanation why cannot they use biodegradable hemp which would decay after its single use rather than surviving in the ocean, breaking into tinier pieces for ever, and clogging the stomachs of filter feeding marine life?  Or they could take their pieces of string home and put them in the bin?

Our West Wales beaches are far closer to pristine than they were 20 years ago.  If we can identify the reason for the remaining offenders perhaps a small change in behaviour would do the trick.