I have spent the last two Tuesdays being trained in bumblebee identification, and I have to say it was challenging.  The course, provided by the West Wales Biodiversity Information Centre ( popularly known as WWBIC) aspired to render us confident in identifying the eight commonest species of bumblebee and our homework after the first session was to send in our photos of bees.

Popping outside to the Cotoneaster horizontalis I found several candidates: gingery brown bees, black bees with red on the tail, and black bees striped like bar codes in yellow with whitish, buff or peachy rear ends.  Confusing enough, they do not keep still for long, and photographing them proved challenging.  Often I found I’d caught a perfectly focused leaf, but the bee had just droned out of the picture.  Memorizing the stripe patterns is also demanding.  To the superficial glance, quite a few bees have one or two yellow bars across the body, but some have three.  In this case there are adjoining stripes on the back of the thorax and the front of the abdomen as in the large and attractive Garden Bumblebee.  But bumble bees are noted for their rounded appearance so that the ‘waist’ between thorax and abdomen is far from obvious!  And distinguishing between white and buff on the tail of flying bee is also quite subjective. 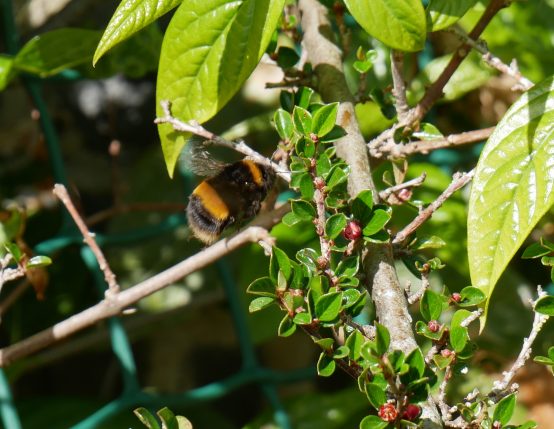 Claire Flynn, project officer for Skills for Bees Cymru guided us through this minefield and we learnt that there were in all 24 different species of bumbles recorded  in the UK, and with the differing appearances of queens, drones and worker bees this adds to the variety.  The Bumblebee Conservation Trust has produced some helpful guides to sorting them all out. There is also an online chart.

Then there is the distinction between Cuckoo Bumblebees and the regular sort.  The Cuckoos do just what you would expect, zooming around looking for bees nests in which to deposit their own eggs and get a  free bee-rearing service.  They are seen eating nectar from flowers but they do not have pollen baskets on their hind legs, for they have no need to carry pollen home.  If they would keep still for long enough one might see that they have hairy thighs, rather than the smooth patch on which their more industrious relations scrape off the pollen.  In class we were introduced to  six species of cuckoo bee, each of which tends to bear an uncanny resemblance to the species which it parasitizes.  I find this particularly remarkable.  Does their disguise aid their  entry to the nest?  The cuckoo bird has no such deception, foisting an entirely different looking chick upon credulous warbler parents.

In all I photographed four species of bumblebees on my cotoneaster, the most abundant being the carder bees, medium sized furry ginger jobs which might be deemed among the easiest to identify. 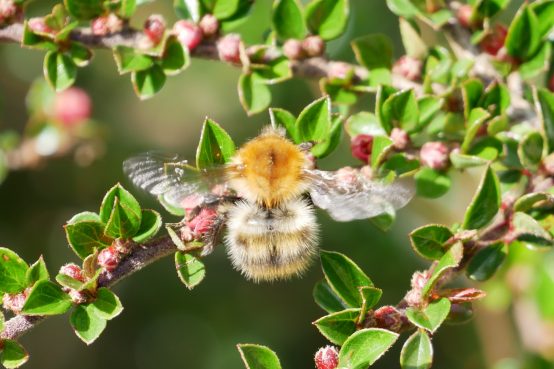 A Carder Bee on my cotoneaster

How to be sure?   Apparently I need to look out for black hairs amongst the bee fuzz. B. pascuorum has some black hairs on the abdomen while B. humilis only has a few black hairs in the armpits (wing bases really).  And if I can lay my hands on a male bee I could inspect his genital capsule for additional clues. 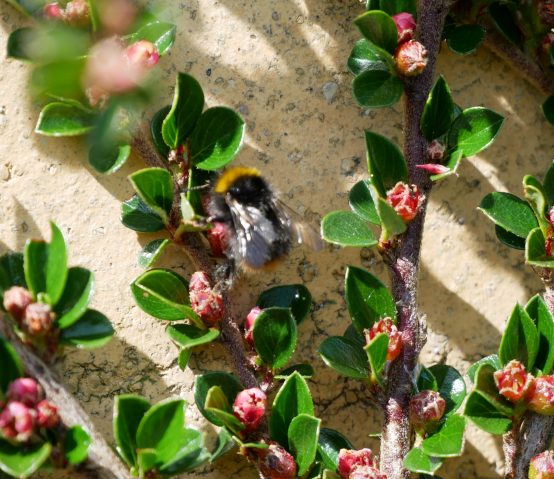 An Early Bumblebee worker, unlike the queens and drones has one yellow stripe not two! 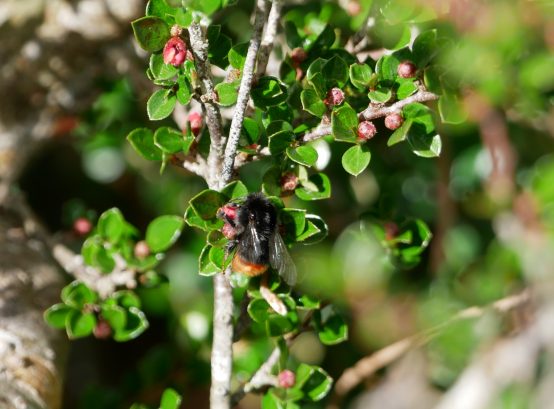 The Red tailed Bumblebee seems easier to identify, though there is also a cuckoo bee and a carder bee with the same colouring!

It is hoped that with further practice we may submit useful records of the bees we see on the WWBIC website or via the LERC app on our phones.  Bee recorders are in short supply, and can provide vital information on the fortunes of our bumblebee populations.

Postscript:  Having sent in a number of additional pictures of my Carder bees they have now been accepted by the experts as definitely the rarer Brown Banded Carder Bee!