I have been reading the transcript ship’s log written by  a distant relative of my husband, a navy captain named Lieutenant  Edward Riou.  In 1789 this gentleman was given command of the naval frigate HMS Guardian, a fifth rate frigate built to carry some 250 men and 44 big guns.  But his voyage was not a military one:  immediately before his command, the ship had been returned to dock in 1787  and refitted as a transport ship, to carry stores and convicts to the newly established penal colony at Port Jackson, now Sydney, Australia.  Founded with the arrival of the first convicts in 1788 the colony was little more than a tented village set in sandy scrub.  Nothing edible was growing there, and all supplies must therefore be brought in by ship until such time as agriculture could be established.  The navy was charged with delivering every possible necessity, and more convicts, both male and female in the following months.

Riou’s journey was not a success.  On leaving the Cape of Good Hope he met with a gigantic iceberg in the South Atlantic and later on Christmas Eve collided with it in the fog.  In the ensuing disorder on Christmas Day the boats were launched and some of the crew disembarked on a launch.  Others drowned in the attempt.  The capacity of the boats was nowhere near sufficient for the entire crew and the 25 convicts.  Riou and  60 men and a 10 year old girl remained on board the severely leaking and rudderless ship and after an extraordinary eight weeks at sea, pumping and baling constantly with the lower deck filled with water, they limped into Table Bay, Capetown. The ship proved to be irretrievably damaged, and most of the contents rotted or destroyed.   Only a quantity of salt pork, salt beef and the convicts and their superintendents were eventually transported by other ships to their Australian destination.  Not till the summer of 1791 did Riou and the last of his crew make their way home.

A fascinating detail of the account is the lists of goods, food and livestock which was packed aboard the Guardian for the use of the nascent colony in Australia.  In London no less a figure than Sir Joseph Banks involved himself in the design and construction of a greenhouse on the deck of the Guardian, to accommodate 100 large plant pots on shelves, and fertilizer, mulch and all necessities for the use of the ship’s gardener, James Smith.  He itemized his charges as follows:

Most of this list is of herbs, fruits and vines which could form the basis of productive farming in the colony.  The superintendents and the convicts had themselves been selected for those with some agricultural experience or skills which could be put to use.  Banks clearly envisioned a Mediterranean style settlement of vineyards and orchards in sunny Australia.  But there is one remarkable exception  –  The Ginkgo biloba.

A look around the eighteenth century mansions of Britain is enough to demonstrate the social significance at the time of this newly-discovered Chinese tree.  Kew Gardens has one known to have been planted in 1762, Blaise Castle House ( built 1796) in Bristol has a huge one adjoining the mansion and the picturesque dairy by John Nash. Ashton Court, another wealthy Bristol merchant’s estate, has three. 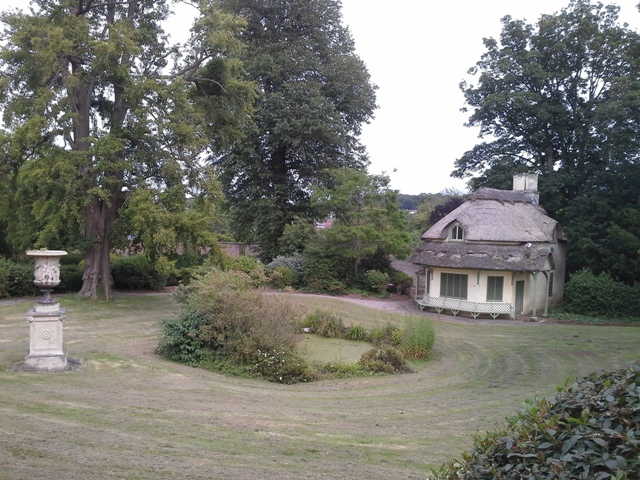 The ornamental Dairy (1806) adjoining Blaise Castle House. and a large Ginkgo to the left in view

Nanteos mansion here in Ceredigion boasts a group of three of which one is the largest in our county, standing in the pleasure ground adjoining the mansion and screening the garden wall.   Significant houses have at least one of these exotica placed as specimens close to the house.  Towards the end of his career ‘Capability’ Brown routinely included a Ginkgo,  a Cedar of Lebanon, and perhaps an Oriental Plane or a purple beech in plantings viewed from the mansion.

It is reasonable to conclude then that the Ginkgo was destined to complement the Governor’s residence at Port Jackson, though this was probably little more than a shed at that time. It ended its days cast overboard from HMS Guardian along with the cattle, sheep, horses and pigs taken on board at the Cape.  Governor A Phillip of the new colony reported to the Admiralty that in the absence of the expected supplies much of the colony’s small stock of livestock had to be slaughtered for food, and that the convicts, on half rations, were too enfeebled to make much headway with building the store houses and accommodation. With 1000 convicts shortly to be dispatched to his jurisdiction, the loss of  the ginkgo was probably the least of his worries.

Source:  HMS Guardian and the Island of Ice  compiled and annotated by Rod Dickson.  Hesperian Press 2012