The Hafod Trust has recently completed the restoration of the Gothic Arcade, a three arched eyecatcher which frames the view where Thomas Johnes’ Chain Bridge spans the narrow gorge  on the upper Ystwyth. 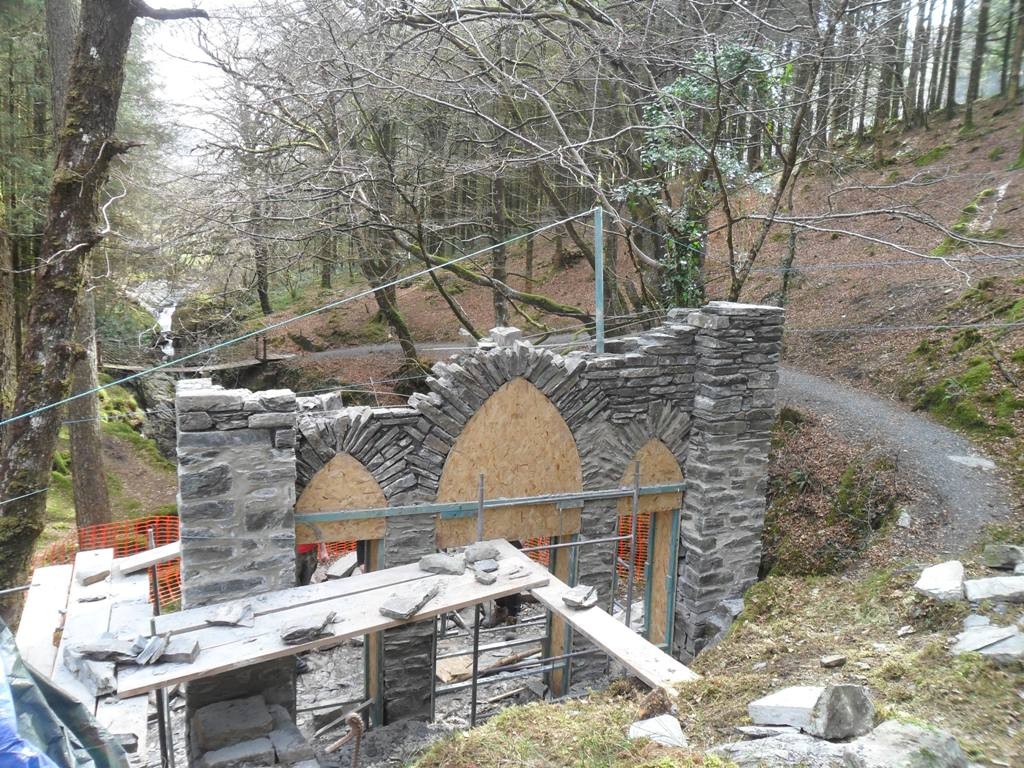 The Gothic arcade, Hafod, under restoration

The arcade was something of a puzzle, being represented on the ground by the remnants of four basal pillars, only one of which reached high enough to show the first springer stone of the former arch.  For almost a decade it has been enrobed in blue plastic awaiting a decision on its conservation.  A earlier attempt at stabilising the stone pillars with lime mortar had failed to prevent further deterioration.  The ruin was listed among the built features of Hafod, with Ancient Monument status, so Cadw  had to authorise any changes to be made. 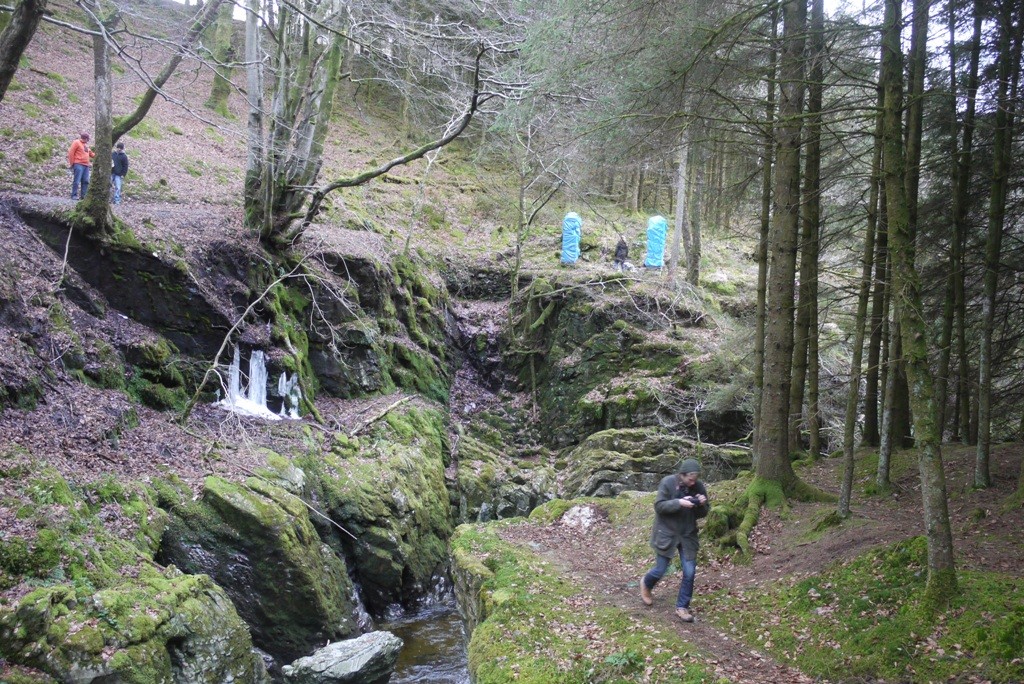 In 2010 The Gothic arcade pillars were conserved under blue plastic.

There is tantalisingly little evidence as to exactly what the Gothic Arcade looked like, or when it was built.  It was awarded this name by John Piper, in 1939, who was there to photograph the architectural remains of Hafod as part of a tour of threatened buildings, and who also sketched and painted in the grounds. There are three versions of this artwork, “Looking down the Ystwyth Gorge, Hafod”  which show it as a three arched rather spindly structure, on the edge of the gorge, but no aspect of his picture is precisely representational. 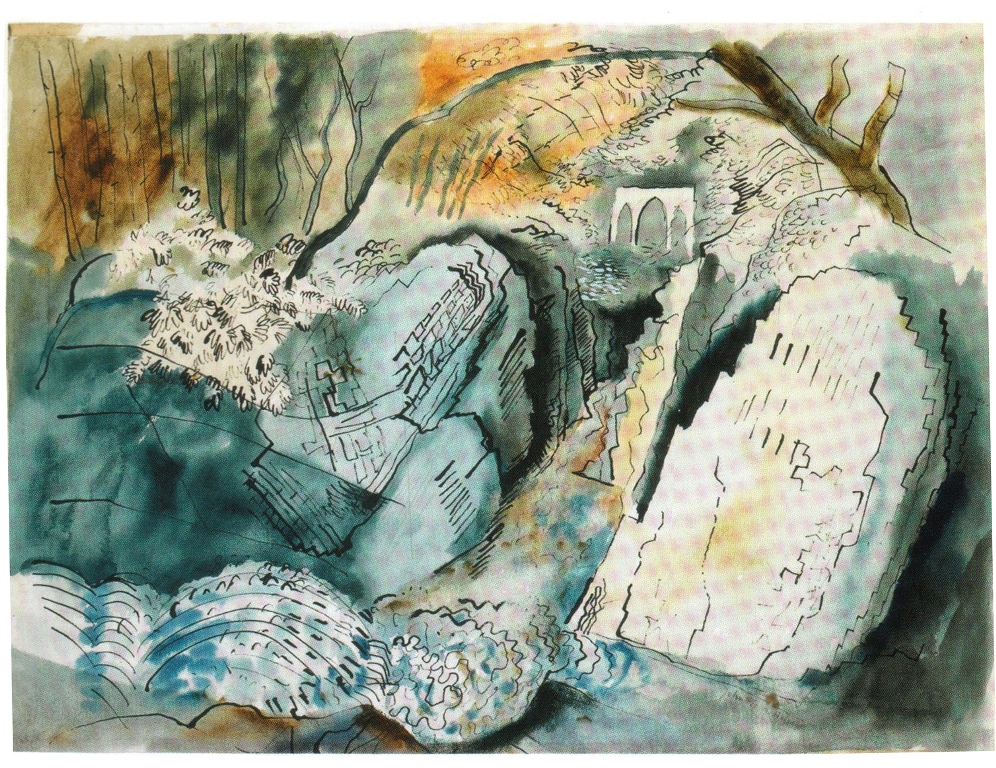 Exhaustive appeals have so far not revealed a single box brownie photograph of the structure, though many people are likely to have passed or picnicked there in the 1950s. Worse still, the accounts by visitors in Johnes’ time, even Cumberland in his An Attempt to Describe Hafod, failed to mention it.  The only possible exception is an unclear account by the Revd H.T. Payne, Archdeacon of Carmarthen, who in about 1815 alluded to a “rude arch of stone“.  But a literal reading of his description would place his arch on the opposite bank, or even identify it as the Rustic Alcove near the Peiran Cascade.

It remains uncertain whether this eye catcher was part of Thomas Johnes’s Picturesque design at all.  (Though we do know that he  built a rustic  arch commemorating George III over the approach road from Devil’s Bridge).  Until further evidence crops up it must be conceded that it could date from the ownership of The Duke of Newcastle, or even that of John Waddingham in the late 19th century, or his son, TJ Waddingham in the early 20th.

The restoration was led by the overall shape as indicated by Piper’s sketch, and the shape dictated by the remaining fragments. It was built with locally sourced, undressed stones by Abbey Masonry and Restoration, Llanelli. 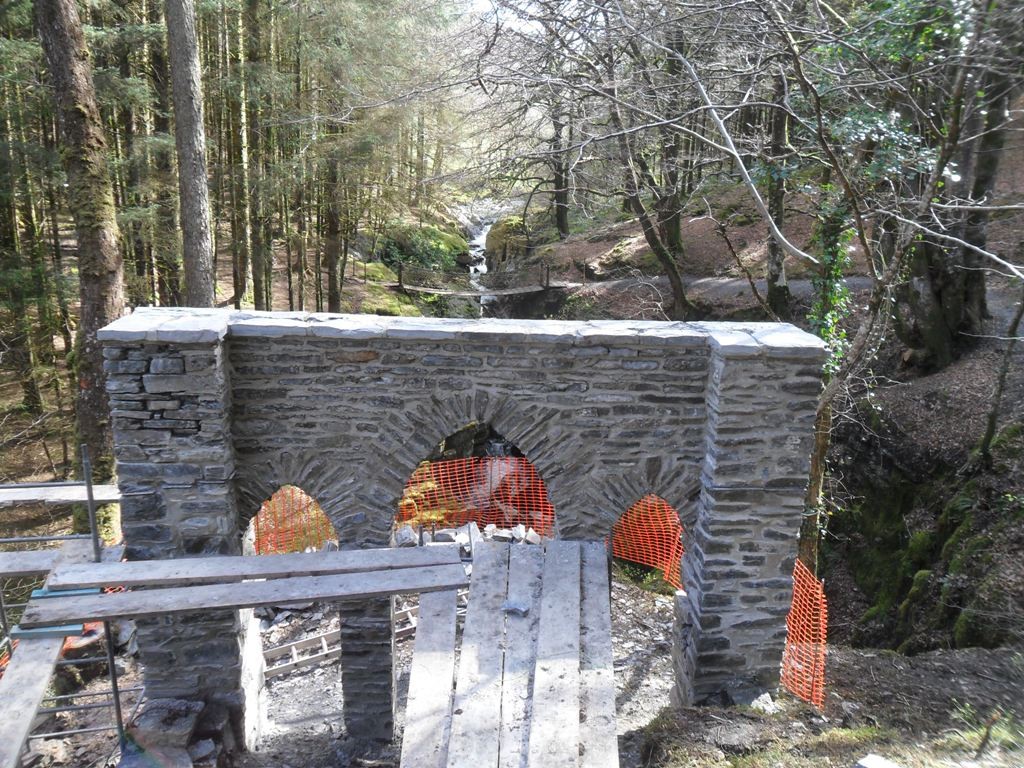 Piper composed his view from upstream of the Gothic Arcade.  He speculated, on the basis of the House’s history,  that its gothic style might be the work of John Nash.  The compilation below shows the restoration in the context of his drawing. 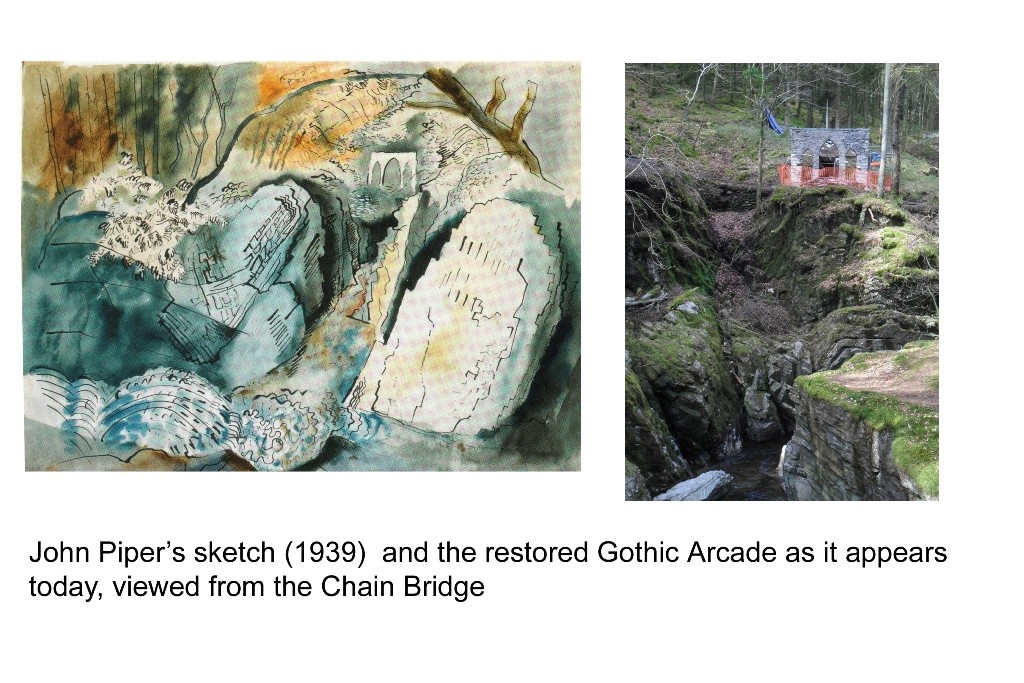 The Gothic Arcade represents the penultimate item on the Hafod Trust’s current restoration objectives.  Still under development is the plan to put a flat timber span across the bridge abutments of Pont Newydd, the old carriage drive which crossed the Peiran just above the famous falls.