Scholars of Hafod are always pleased when a new image of this lost house comes to light. The latest to do so is a painting by the celebrated artist John Piper, who is well known for other sketches on the estate such as what appears to be the only pictoral representation of the Gothic arcade which overlooks the chain bridge over the Ystwyth Gorge.  The new picture has been found in plain sight, hanging on the wall in St Cross College, Oxford.  The college has kindly allowed me to reproduce it here. 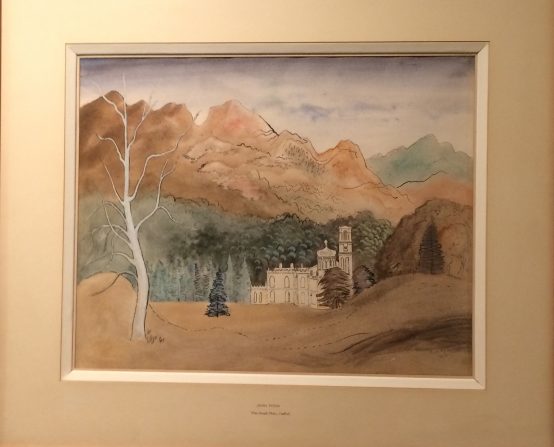 The caption on the mount reads ” The Dead Tree, Hafod”    I have spent much time puzzling over the picture.  Assuming it to be reasonably representational, the view is taken from a direction rarely seen in Hafod pictures.  ( Most images view the mansion from the parkland to the south east.)  Here the artist is apparently standing on the slope to the north east of the house.  Only from there would the Italianate campanile appear behind and to the right of the Octagon library.

There is an early 20th century photograph taken from the south west, on the other side of the valley which shows a similar juxtaposition from the opposite side.  But this enhances the confusion, for a broad two storey wing reaches out to the west of the campanile.  Viewed as Piper saw it, that wing just isn’t there.  Had it been demolished at the time of Piper’s sketch? 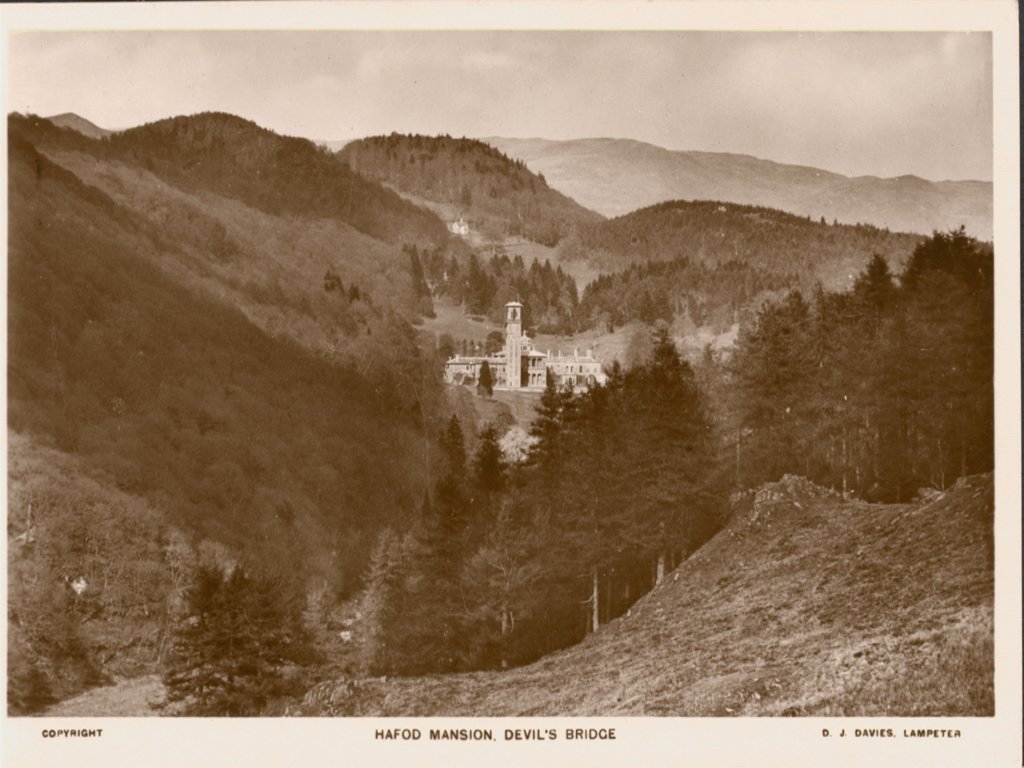 No apparently not.  I am assured that Piper did not revisit after his sketching at Hafod in 1939, and that demolition did not commence until 1949 when the interior was stripped of all assets and the new Italianate wing was the first part to be pulled down. It must be assumed that Piper decided not to paint any of the structure to the right of the campanile.

Another relatively recent discovery is the earliest known picture of Hafod, a sketch made in the 1780s when Johnes’ dream was just taking shape.  This view from the east shows the new gothic styled  house by Thomas Baldwin of Bath welded onto the old tall-chimneyed farmhouse of the Herberts of Dolgors.  This picture, unnamed, had long languished in the archives of Cardiff University until it was spotted and identified by then graduate student and architectural historian Mark Baker. 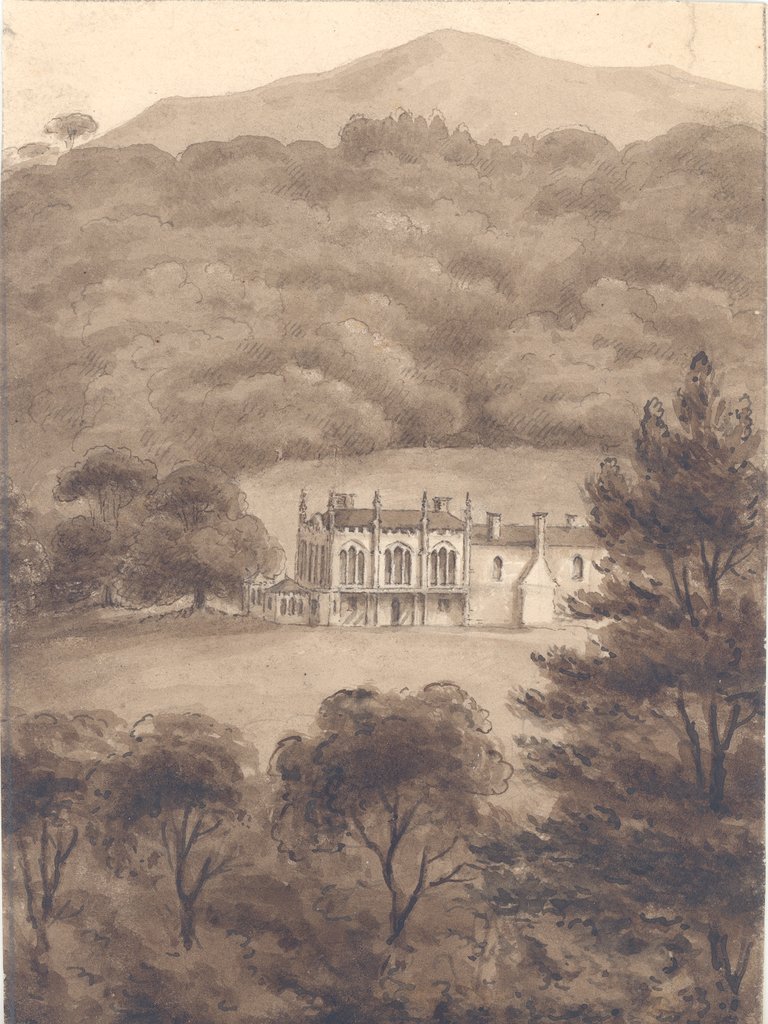 The south east face of the Baldwin house with the three gothic windows above a  conservatory with gothic pavilions  can still be seen at the right hand end of the house in a steel engraving of around 1850, but this end is now dwarfed by the subsequent additions by the Duke of Newcastle and then Henry de Hoghton.  By these improvements they created the huge sprawling house which proved unviable for survival in the 20th century. 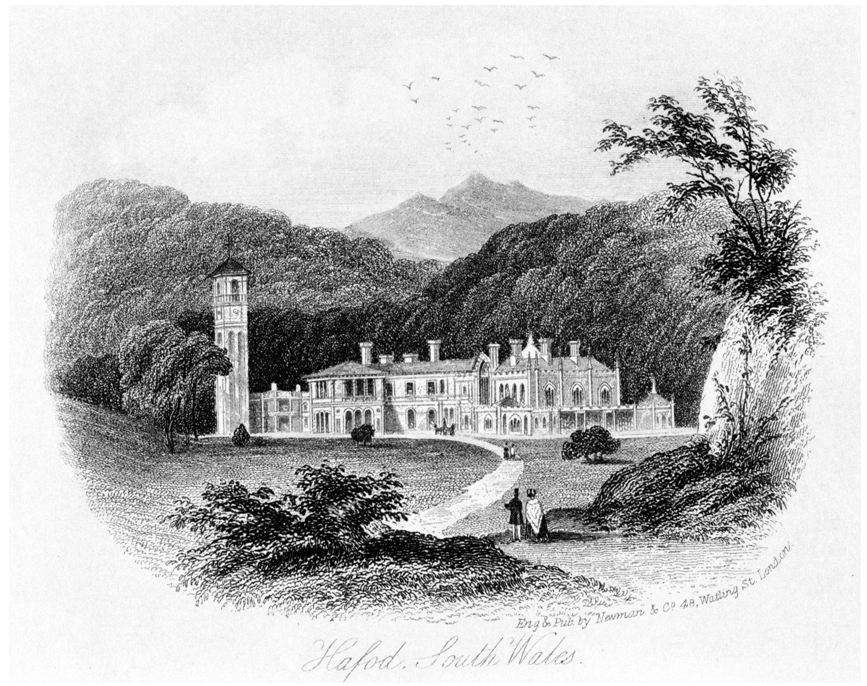 Steel engraving by Newman & Co, of around 1850.  Successive additions have grown to the left of Johnes’ original house.

What use would Hafod mansion be put to if it survived today?  It is hard to imagine, for Ceredigion remains far off the beaten track for flourishing stately homes.  Of our other big landed estates, Trawscoed mansion remains languishing in search of a new owner, and is increasingly spoiled by divided ownership, Plas Gogerddan survives as an embarrassment to the University beside the huge modern IBERS offices and greenhouses on the former walled garden, and only Nanteos, after much investment, is now making its living as a country house hotel.

3 thoughts on “Some puzzling pictures of Hafod”