The concept of the Picturesque was to stir deep feelings in the visitor.  His or her emotions should be stirred not only by the beautiful but by the sublime.  A therapeutic shot of terror, engendered by a dizzy drop, a roaring cascade, or a dark rock-cut tunnel or cave were among the elements of a satisfactory Picturesque Landscape.  Thomas Johnes of Hafod did his best to supply these scary elements, most notably with the precipitous narrow contoured path of the Gentleman’s walk to the south of the river, and the cascade cavern where the visitor passes, crouching, into almost total darkness in a rock tunnel before turning a slight corner and being confronted with a roaring waterfall blocking his path.

Other elements were smooth, gentle and naturalistic.  Such was the Alpine Meadow by the river side, and the careful gradients of the Lady’s Walk through the woods.  Equal smoothness of contour defines the old carriage drive which brought the visitor from London past Cwmystwyth and across a stone bridge over the Nant Peiran.  We tend to forget that the early roadmaps, the Britannia and Ogilvy atlases (strip maps similar in concept to the bespoke navigation of a modern  sat nav) provide annotated routes of which the very first in the collection takes the traveller from London to Aberystwyth, passing close by the Hafod estate.

It is this old bridge, broken and impassible for many decades which is the latest object of careful re-instatement by The Hafod Trust.  The wooden span was collapsed by the 1980s and as the stream tore away the fallen timbers there remained the tall abutments of the bridge, adjoined by two handsome beech trees framing an alarming chasm.  Many a dog has hastened enthusiastically along the old carriage drive to pull up suddenly at the very edge. The new bridge span is of timber, echoing the 19th century remains, but much narrower, its purpose to provide access for walkers and for the more intrepid wheelchair user. Completed in November by TTS Wales of Tregaron, it already blends quietly into the scenery. 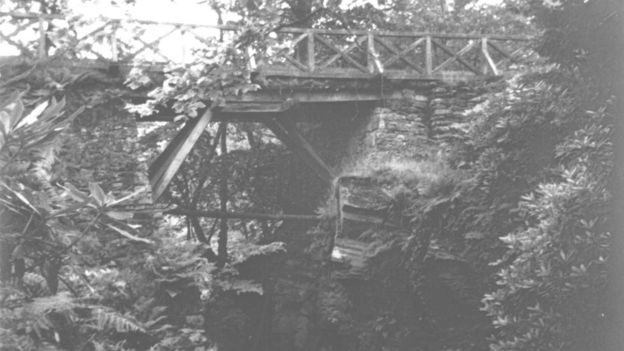 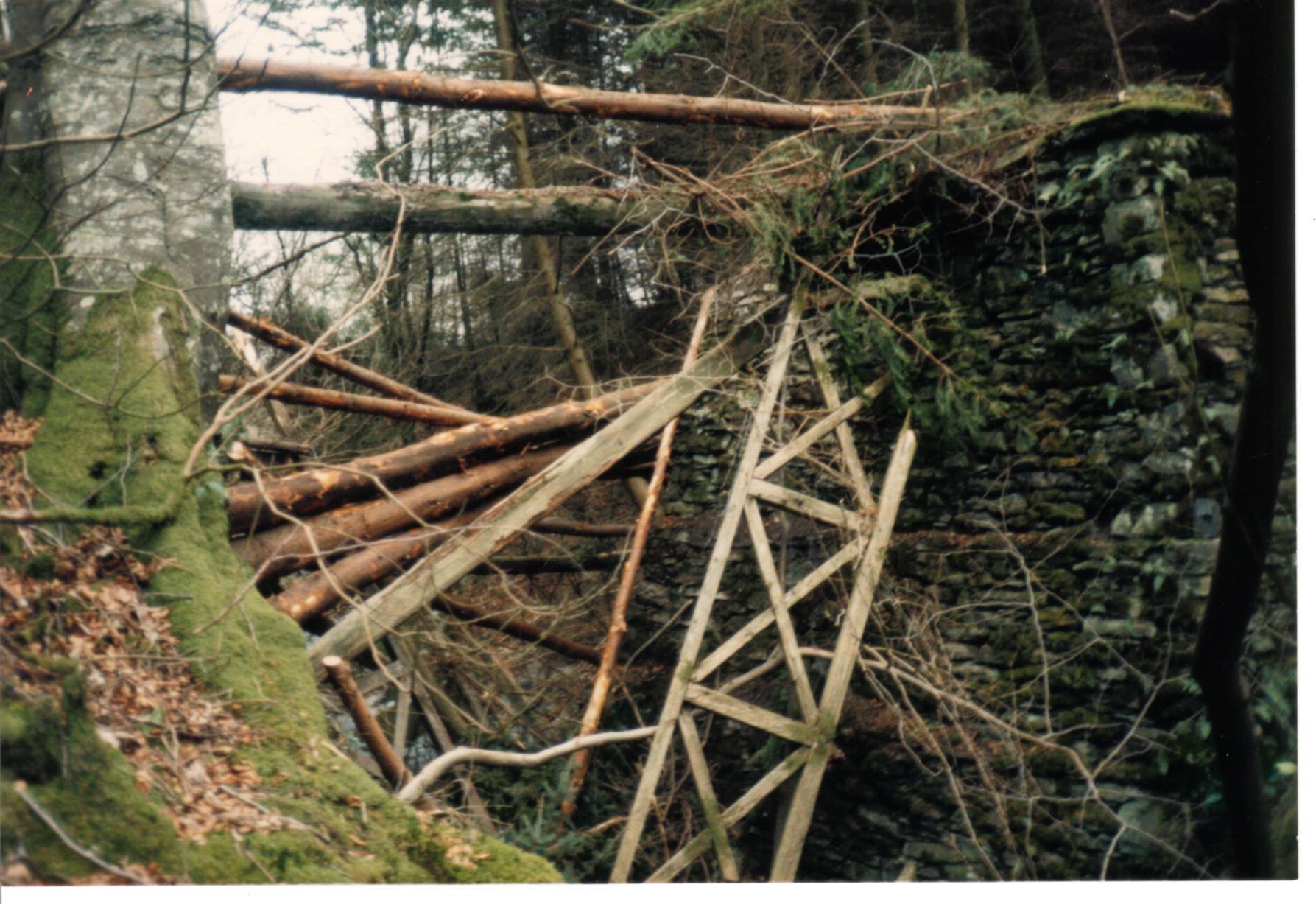 But there is a recent history equally worthy of recall, perhaps especially in the light of Hafod’s heritage of the sublime.  Little could be more awesome than to fly over this unprotected chasm on a bicycle!  The photographic evidence is out there on the internet and can be reproduced here. 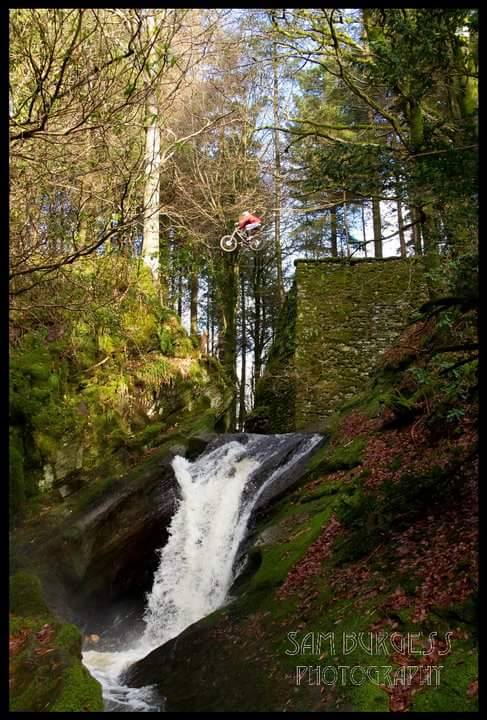 This dizzyingly dangerous feat recorded in colour was at least preceded by trial jumps with a safety net rigged across the gap. The rider was local boy Olly Davey, still living and still hurtling down mountains on bikes.  You grow up at Hafod – you make your own entertainment! 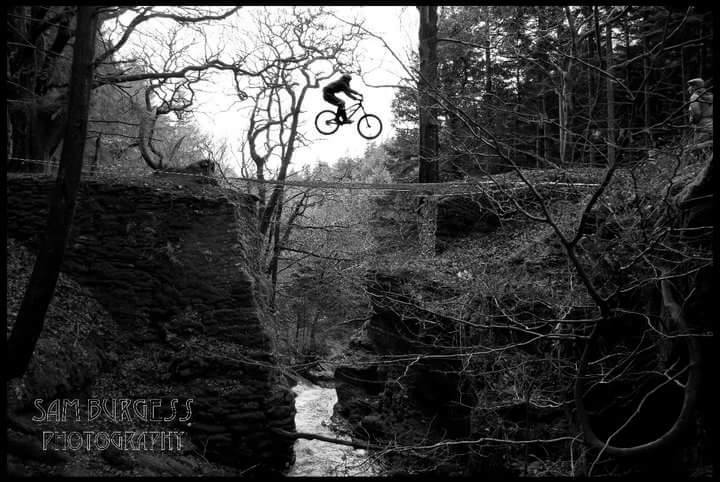 The adrenaline rush for the rider or spectator is surely the very essence of the sublime experience.  Young men have always been fascinated by the possibilities of leaping chasms.   I was brought up in Yorkshire where the best known legend concerned the Strid on the river Wharfe, where a 12th century  youth, the Boy of Egremont, accustomed to leaping a pinch point on the gorge, failed to let his hound off the lead causing both to fall to their deaths.  Many a chasm has a similar oral tradition.

Health and Safety considerations have led the long jump to be confined to more prosaic environments these days.  Indeed even the reconstruction of the bridge involved a quantity of scaffolding which would have astounded the former bridge builders. 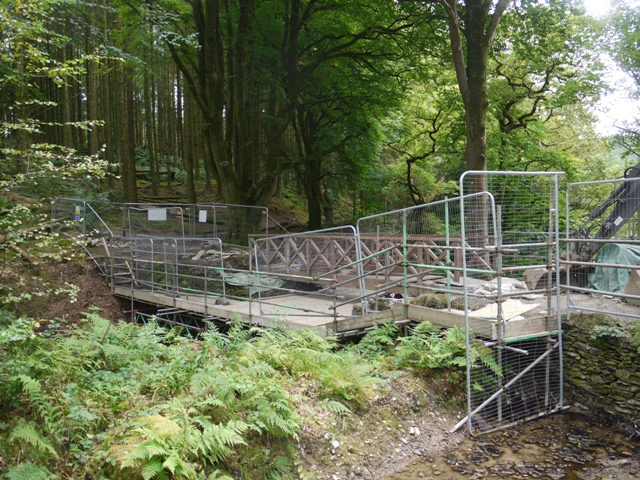 The new footbridge under construction at Pont Newydd

I am indebted to Jez Young, (who worked on the new bridge and recorded the details of progress on the  building work in an excellent blog on Facebook), for drawing these historic images to light.  They are, rightly, part of the history of Hafod.  We shall not see such a feat here again. 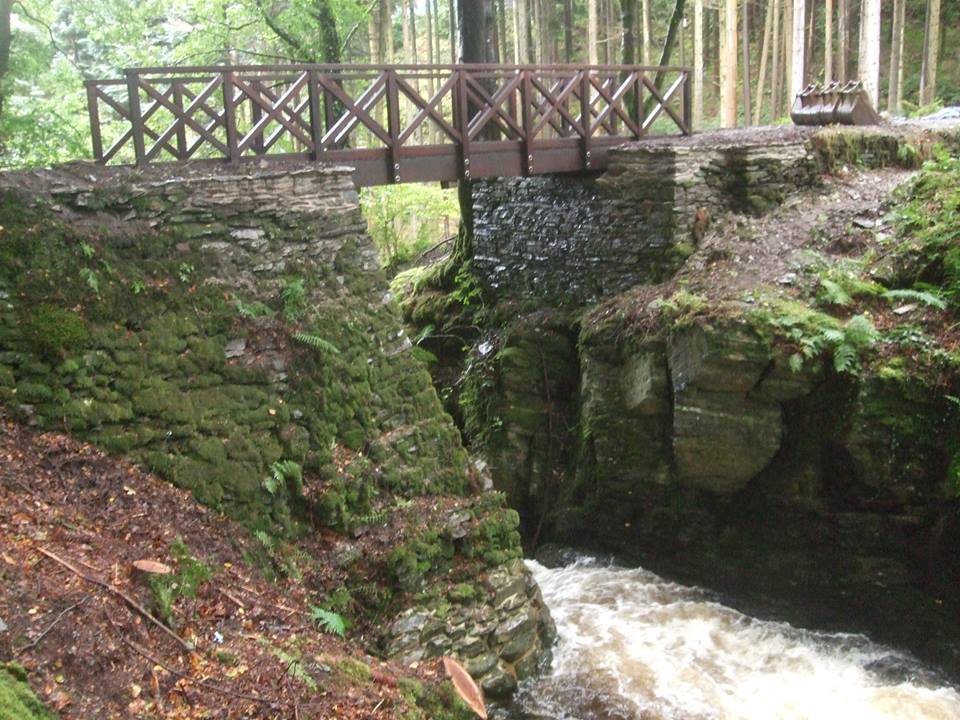