There is a new arrival on Tanybwlch beach, remarkably in the shape of a dragon, looking out to sea. 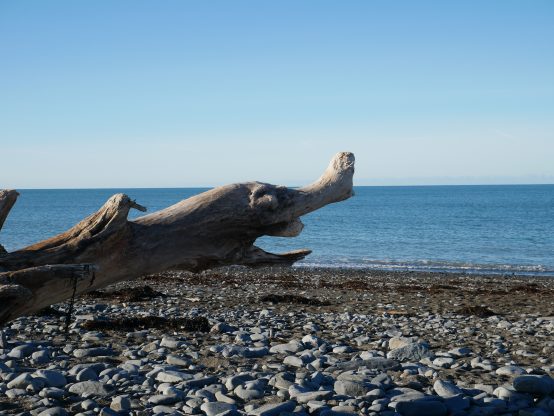 A large tree trunk, felicitously worn by the abrasive boulders has beached itself high on the shore near the south end of the beach during a recent storm, and presented itself to best advantage in this weekend’s winter sunshine. 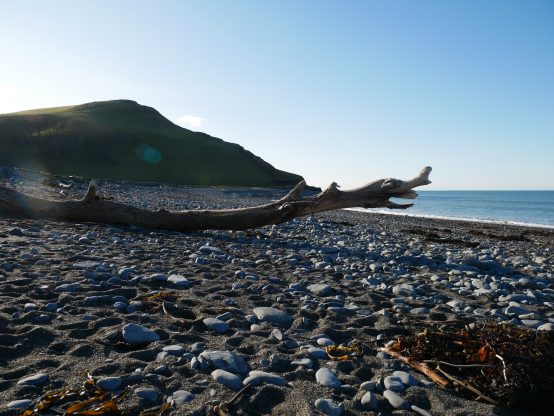 Walking the strand line, I was also impressed by the scarcity of plastic waste.  I wonder whether this is entirely down to the dedicated beach cleaners who regularly patrol our beaches, or whether, (dare one hope?) the rate at which rubbish is discarded into the Irish sea is at last diminishing.

I used to beach clean here regularly a decade ago when we recorded all the items for the Marine Conservation Society records. In those days one did not go far to fill a sack with single-use plastic and hard plastic crates and bits of rope.  Yesterday there were a few bottle tops and fragments of plastic amongst the dried wrack, but the waste was predominantly what it should be: biodegradable seaweed and sticks washed down the rivers in the recent rains. 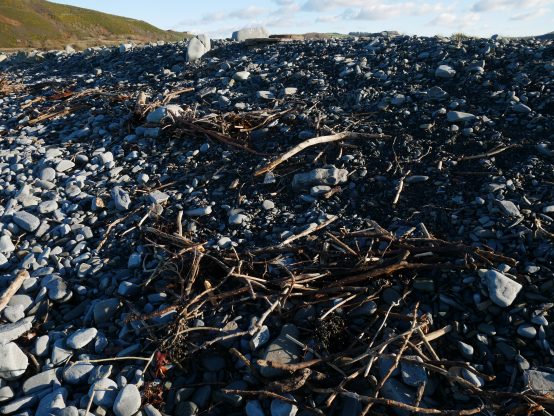 Driftwood on the strandline

How much easier on the eye than a strandline of coloured waste.  Aberstwyth Beach Buddies and Surfers against Sewage are to be congratulated for their action and campaigning, but so too is everyone who now chooses not to chuck their rubbish into the sea in the first place!  I remember standing on a cross channel ferry in the 1970s and watching aghast as a kitchen hand emerged on the deck below and tipped all the ferry’s catering packaging off the stern to bob away in our wake.  I have no doubt he was following orders. Fifty years later the public all have camera phones and I don’t think many companies would risk being observed.

Driftwood on the strandline at Tanybwlch beach

2 thoughts on “A Dragon on Tanybwlch beach”