There is much disquiet at Hafod at the impending loss of another of its veteran beech trees, one which stands beside the little stone bridge on the drive just below the spur path up to the Bedford Monument and Mariamne’s Garden. 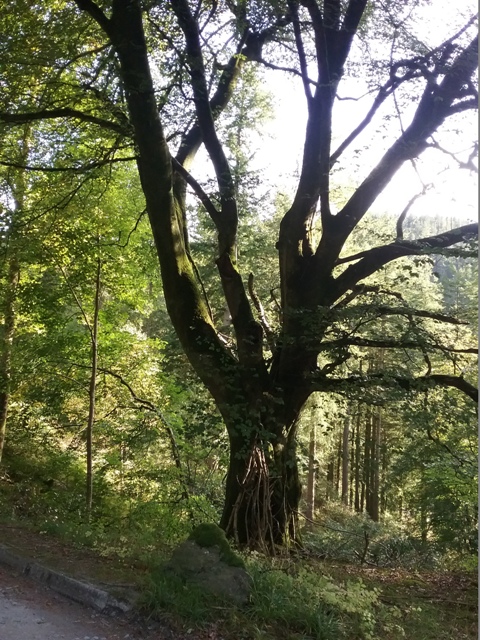 This is probably the tallest of Hafod’s surviving ancient beech trees, drawn upwards  in a fairly sheltered position in the lea of the steeply rising hillside.  It is also one the best known, because only two of the big beeches are easily visible from the road through the estate.

Unfortunately it drew attention to itself last September by dropping a large branch, which fell harmlessly into the stream valley below.   As a result, a much earlier bough loss became visible to the passer by and was noticed by Jim Ralph the NRW Local Area  Manager responsible for Hafod.   Higher up the tree, well above the recently-lost branch, an old tear is visible which is flanked by the curved buttresses of wound-healing wood on either side.  I would guess this injury is several decades old. 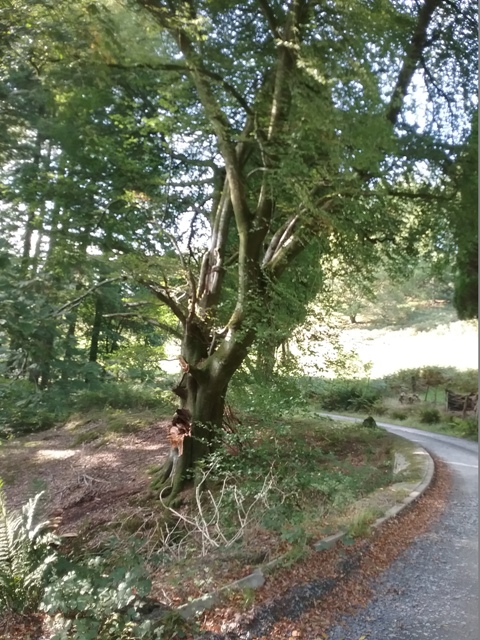 The veteran beech below Mariamne’s garden

However its potential to shed further branches came to mind, and when Health and Safety collides with Conservation the the latter is seldom the winner.  Expert opinion of an arboriculturist identified the tree as a ‘moderate’ threat, further branch fall could occur, the branch could fall onto the road, there could be a passerby on that road at the moment when it falls.  The recommendation was that it should be felled to a tall stump.

Hafod residents are so upset at the prospect of loosing this lovely tree that a few weeks ago a petition was launched on Change.org which has already attracted more than 200 signatories.  I attended a meeting recently at which an articulate group expressed their views to NRW.  Tellingly, all were willing to see the road closed through the estate if such a course of action would save the tree by reducing public access to its vicinity.

In a wide ranging discussion it was asserted by the residents and confirmed by Dave Newnham, the Hafod Estate Manager, that a greater risk of being struck by a falling tree is posed by the large Douglas firs and other conifers adjoining the road and paths on Hafod. The Local Area Manager did not disagree with this opinion, but explained that the conifers are not subject to similar levels of inspection and risk assessment.  As anyone who has walked through a conifer plantation after a storm knows, perfectly healthy trees may blow over, their root plate lifted clean out of the ground.  Which trees may fall is unpredictable, so the crop is not inspected.  Wind-blow is an accepted risk.

It seems that the collapse of a piece off a veteran tree cannot be an accepted risk in terms of NRW management,  so any veteran beech faces a similar fate.  Just such a scenario was played out at Hafod ten years ago when the then Forestry Commission Local Manager’s eye fell upon a beautiful tree in a group below Pant Melyn, not far from the footpath to the Cascade Cavern, (locally known as the Robber’s cave). 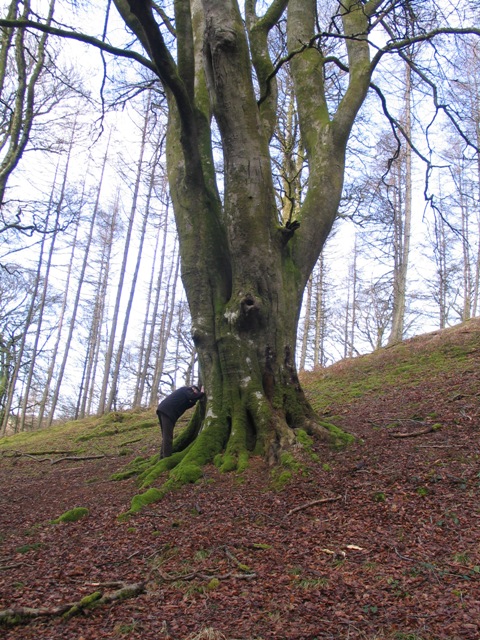 The tree was huge and  healthy, but had at its base a hollow trunk into which it was possible for a small person to squeeze. A specialist report employing sonic tomography confirmed the obvious, that the tree was hollow on one side, and despite an inconclusive debate as to the relative strength of a rod and a cylinder of wood, the tree was duly felled to a high stump.  The Hafod Trust argued passionately for its retention, but to no avail. The case for its destruction was enhanced by the fact that the route to the Cavern Cascade is a public footpath, and families often paused to rest and enjoy that very tree. 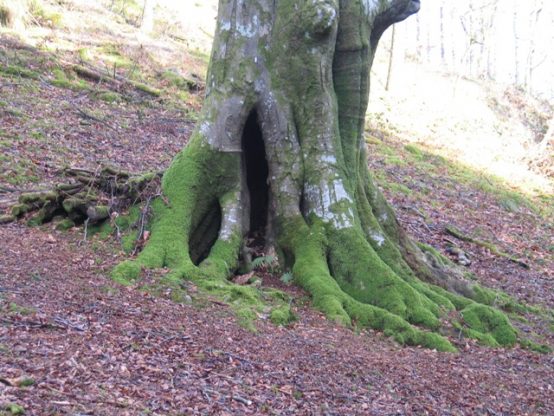 The hollow beech at Cae Melyn, Hafod, in 2009 was deemed unsafe, and was cut down

There are  probably a score of  other fine beeches, dating from Thomas Johnes’s time on the Hafod Estate, and fortunately most of them are further from a road.  For the time being this is their salvation, for NRW are unlikely to send out specialist arboriculturalists to inspect them all.  But if they did, probably none would be given a clean bill of health for the 21st century.

Current interpretation by NRW of the risk of litigation appears to be that the further from the car park you are when felled by a tree, the less responsible they, (the landowner), are likely to be considered!  Across the UK about 4 people per year are killed by a falling tree, a minute contribution to overall human mortality.  But for this reason, the veteran trees which draw people to Hafod will all be, sooner or later, at risk.

A change of policy at a high level would be needed to overturn the current thinking. The petition to National Resources Wales  is at https://www.change.org/p/nastural-resource-wales-to-support-local-veteran-trees-of-hafod

1 thought on “Veteran tree in danger at Hafod”