In the summer of 1788 Jane Johnes wrote to her brother John Johnes of Dolaucothi describing her garden at Hafod  as ” in high beauty” and “full of flowers”.  Two hundred and thirty years is a long time ago, and for much of the recent hundred there was nothing to boast about at Hafod.  So it is pleasing this summer to be able once more to echo those words, as the  borders fill out with recently replanted herbaceous perennials and a glut of multi-headed foxgloves. 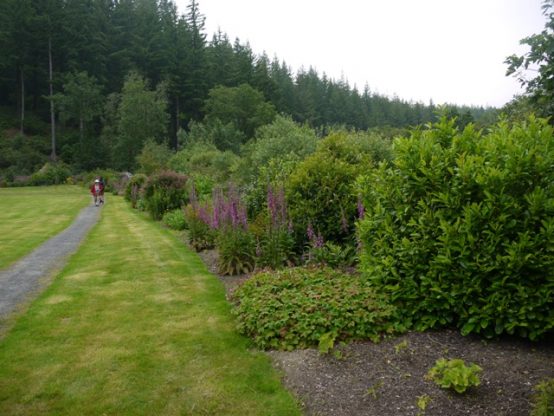 Foxgloves in the borders in Mrs Johnes’ garden Hafod

The restoration began with the removal of the sitka spruce plantation 10 year ago and the shrubs around the perimeter are now up to 7 years’ established.  Recently, pride of place has been held by the scented Philadelphus, the gleaming white blooms of Rosa x alba Semi Plena, and the arching briars of Shailer’s White Moss Rose. 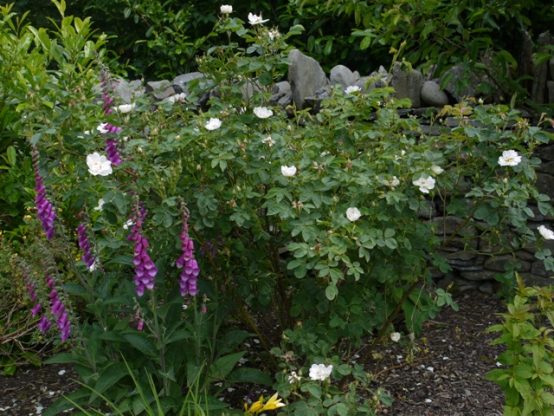 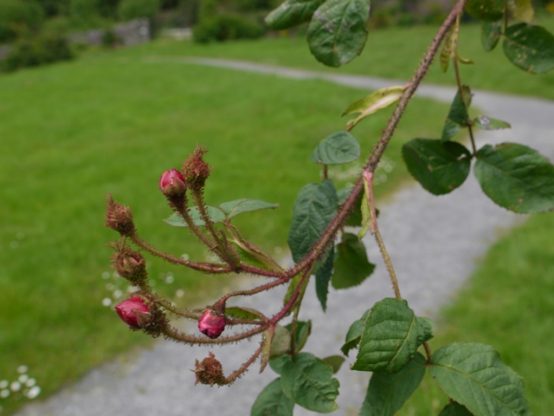 The Hafod Trust  received donations towards the planting of the garden from the Finnis Scott Foundation, and from the Welsh Historic Gardens Trust.   With the final planting phase and a lavish application of rich organic mulch in the autumn of last year the garden has now turned a corner, and is developing the frothy abundance of a proper garden.  The foxgloves are natives which, finding themselves in such a rich environment, sent up as many as half a dozen flower spikes from every plant.  The two or three welsh poppies planted two years ago now have spawned a host of seedlings, while patches of Doronicum, Chelone, Lysimachia, Veronicastrum and  Elecampane jockey for position amongst the shrubs.

The Cardiganshire Horticultural Society visited at the end of June and despite persistent rain enjoyed a number of short talks about the garden. 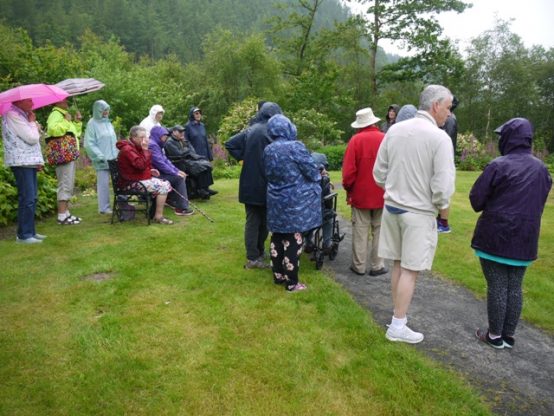 Historian Jennie Macve described its place in Garden History.   In 1787 Johnes visited Rev W. Gilpin and told him that his chief guide in laying out his grounds at Hafod had been Rev William Mason’s lengthy poetic work, ‘The English Garden’.   In volume four of this work, Mason (who laid out the garden at Nuneham Courtney in Oxfordshire) gives his prescription for his then innovative style of flower garden, with its circuit gravel walk, its flower beds cut out of shaven turf forming winding grass paths between, its thickets of shrubs and colourful flowers. Visitors to Hafod described the garden lying, like a jewel in the wilderness, glimpsed briefly from the wooded heights of Gentleman’s Walk on the south bank of the Ystwyth, or appearing suddenly to the walker approaching on the gentler Lady’s Walk.

Jennie also revealed that although the Coade stone heads of a Nymph and a Satyr which form the keystones of the two garden entrances bear the date 1793 it is unclear when they were installed there.  The door arches as seen today were heavily restored in the 1980s when the garden was derelict and the original Coade stone heads had already found their way into Margaret Evans’s Collection, which now resides in the Ceredigion Museum.  The heads in the garden today are perfect replicas in resin.  Oddly, none of the contemporary descriptions mention these arches, or the stone heads.  It is even possible  that these elaborate doorways were installed by a later owner, perhaps the Duke of Northumberland, using second-hand Coade stone ornament. We just do not know. 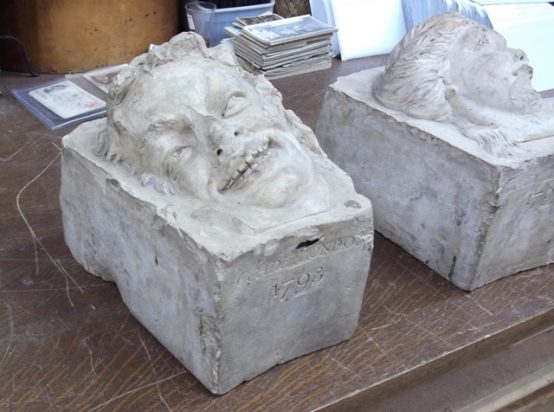 The original Coade Stone heads, now in the Ceredigion Museum

She also viewed with caution the designation as an ‘American Garden’.  Only one contemporary visitor who left a written record describes the presence of American plants.  What is clear though is that Jane Johnes was a keen plantswoman,  the Johneses employed able gardeners, and that they corresponded about plants with their friends Sir Robert Liston and his wife, who cultivated an acclaimed American Garden at their home in Edinburgh.  Plants enthusiasts, then as now, invariably seek out and exchange rare plants new to horticulture.  Just as the Wollemi pine and the tree fern Dicksonia antarctica have become the must-have plants of today, Jane and the Listons would have sought to obtain the new.  In the late eighteenth century much of the new was being imported by plant collectors working the eastern seaboard of the USA.  Very few plants had yet been imported from the far east, and the many exotic Chinese and Japanese garden plants so familiar today were quite unknown.

Landscape architect Ros Laidlaw was also present to explain how she had selected the plants for Mrs Johnes’ garden entirely from species and cultivars known to be available to British gardeners in the eighteenth century.  This was quite a challenging task, for some, such as the fragrant North American shrub Comptonia asplenifolia have fallen from popular use and no longer appear in nurserymen’s lists, whilst for many other plants, improved hybrid versions have now largely replaced the original species.  The roses I alluded to at the beginning are named cultivar Old Roses with an established history,  the fragrant Philadelphus coronarius has open yellow-centred single flowers, quite like a Eucryphia bloom, rather than the familiar double flowers of modern garden cultivars.

The modern restoration does not attempt to reproduce the layout of the original garden which would have had many brilliant island beds, probably geometrically arranged and cut out of the shaven turf.  Such a  garden would be extremely labour-intensive to care for, and is best enjoyed by small groups of people strolling through the sinuous paths inspecting the plantings.  In its present form the garden offers historical authenticity in the path layout and the selection of species in the perimeter border, while the central lawn has made possible events such as the phenomenally successful Foxglove Fair which in early May saw as many as 2000 visitors enjoying food, shopping and entertainment under a brilliant and cloudless sky. 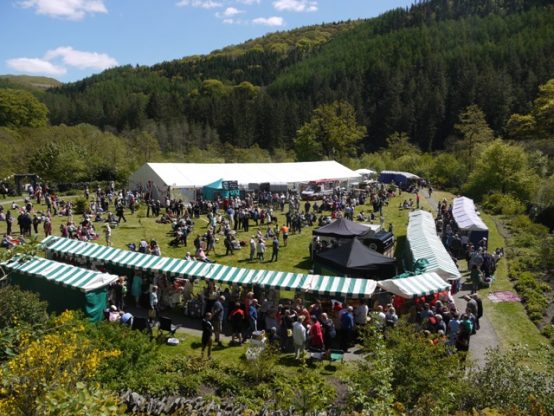 Crowds descended on the Foxglove Fair in 12 May 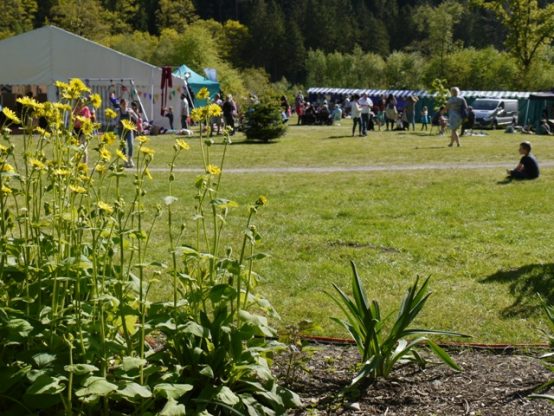 The garden is principally maintained by the Hafod Estate manager Dave Newnham and his assistant Simon Boussetta.  There are also regular Volunteer Weeding Days, the next of which will be on Friday 19 July and Friday 23 August.  Garden maintenance is vital and more loyal volunteers are always needed.  Volunteers bring their preferred weeding tools, and are rewarded with tea and coffee and a keen sense of achievement!  They have been very enjoyable days.