Regular readers may remember that in April I set out on the trail of 19th century local author Dorothea Jones, who wrote under the pen name  “ Gwynfryn”.   She had been a prolific contributor to improving magazines and from these articles her first book Friends in Fur and Feather was published in 1869, and later followed by Sick and in Prison, and  The Otter’s Story.  Always coy about her real identity, Dorothea Jones dropped additional clues in her later books, referring to the titles of her previous publications and dedicating The Otter’s Story to her brother William Basil the Bishop of St David’s. 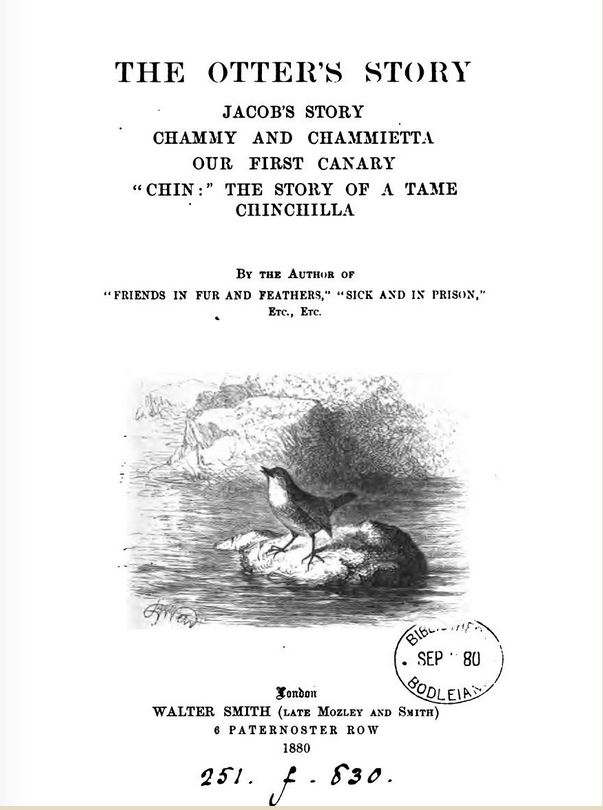 Title page of her second book, a collection of articles, The Otter’s Story Etc.

All Dorothea Jones’s work has subsequently been misattributed to the American nature writer, Olive Thorne Miller, who published in 1880 “Little Folks in Fur and Feather and others in Neither” and the similarity of titles doubtless led to this error.

I am pleased to report that after correspondence with the Bodleian Library, which holds one of the misattributed copies, Dorothea Jones is re-instated in the catalogue and her transatlantic mimic is no longer credited with her book.   The Head of Collections wrote explaining that the error goes back to the 1890s when a Bodleian cataloguer made an incorrect identification based on similarity of title.  Dorothea Jones had died in 1885.

In the ensuing years and especially the recent past, the error has been compounded, for Dorothea’s other two books are also attributed to Olive Thorne Miller in major libraries around the world.  The reproduction out-of print books which can be ordered on the internet these days also all attribute her titles to the American author, and the online scanned original editions displayed by Google Books, Open Library and other sources are similarly mislabelled.

It has taken one hundred and twenty three years to correct the original fault.  It may well take a further century to correct the fan of misinformation which has followed.  I am sure that the Bishop’s sister would be delighted to know that Friends in Fur and Feather is listed on page 2409 of the august modern edition of The Cambridge Bibliography of English Literature.  However she might be less pleased to find it attributed here too to Olive Thorne Miller!  If the dead really did spin in their graves there would surely be a deep hole at her burial site by now.