Few scenes could be more unexpected than the appearance of a marquee in a manicured garden in the middle of a forestry estate in upland Ceredigion.  Even more improbable, perhaps, is that on 2 June the sun should blaze in a cloudless sky, while the midges were banished by a gently cooling breeze.  Converging from the local community and from far flung corners of Wales were some 150 guests assembled for a traditional Welsh tea and to celebrate the restoration and re-planting of Mrs Johnes’ Georgian flower garden. 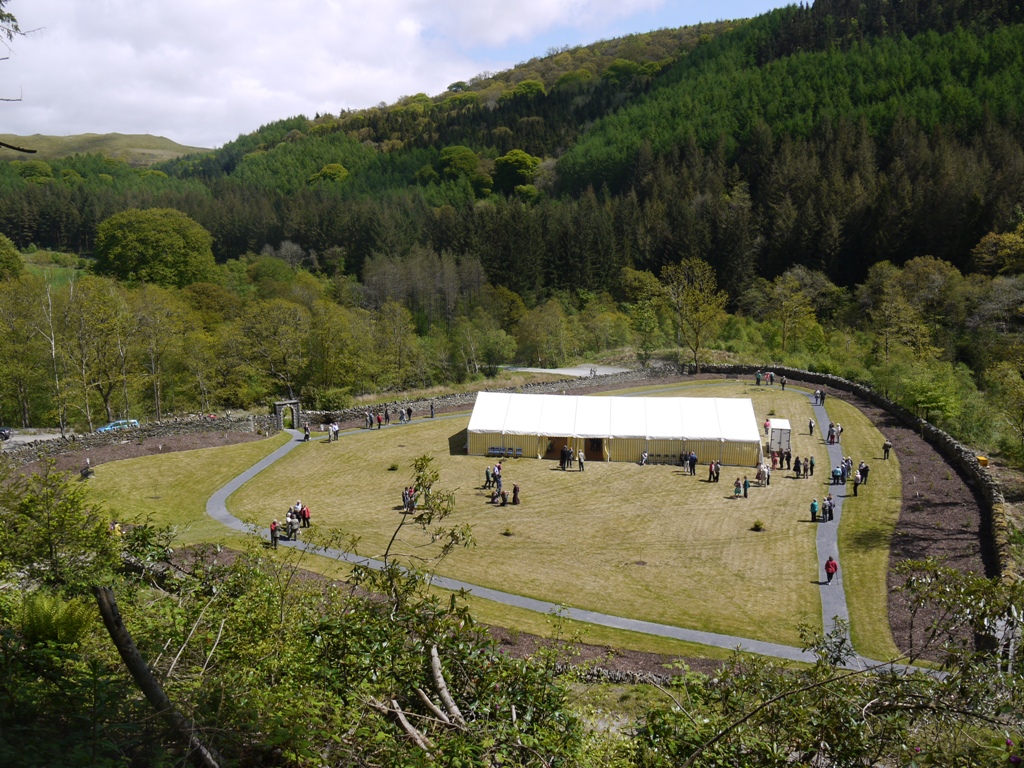 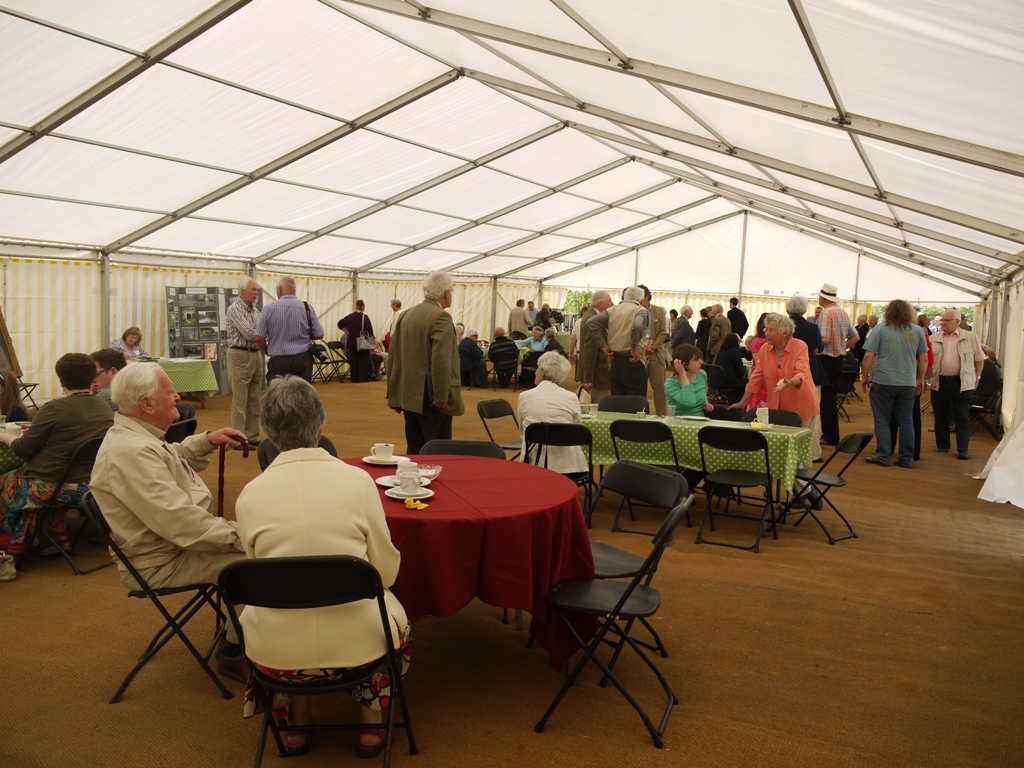 A Victorian-style afternoon tea was enjoyed by 150 guests

The location was Hafod Uchtryd, the pioneering Picturesque landscape created by Thomas Johnes in the late 18th Century in the then barren landscape of the Upper Ystwyth valley 15 miles inland from Aberystwyth.  His story has been told many times: how he settled here with his second wife Jane Johnes and steadily poured his massive wealth from other properties into creating his personal Xanadu, a Gothic house by the architects Thomas Baldwin and John Nash, a model farm, huge plantations of oak, beech and larch, miles of carefully graded walking paths leading the visitor through the landscape of gnarled trees, pools, cascades and rock cut tunnels and viewpoints.  All the aesthetic cognoscenti came to visit Hafod and like other great houses the gardener could, for a consideration be persuaded to allow a visit to the gardens and the long conservatory before pointing his charges off onto one of the two circuit walks: the Lady’s Walk which took in the Church, and the more strenuous Gentleman’s Walk on the contours of the southern flank of the valley.

Johnes and his wife had one child, Mariamne, something of a child prodigy with a great flair for botany and a crippling infirmity which caused her to be at times encased in a gigantic metal spinal brace.   Notwithstanding this, she had her own private garden, an alpine garden perched on a crag east of the house, while her mother had a flower garden near the carriage drive out of sight of the house.  As early as 1788 Jane Johnes was writing to her brother “this place is in higher beauty than ever I saw it, my flower garden full of flowers”.  Among the many records by 19th century tourists I offer a quotation from B.H. Malkin (The Scenery, Antiquities and Bibliography of South Wales published 1804) “A gaudy flower garden, with its wreathing and fragrant plats bordered by shaven turf, with a smooth gravel walk carried around, is dropped, like an ornamental gem among wild and towering rocks, in the very heart of boundless woods. The spot contains about two acres, swelling gently to meet the sunbeams, and teeming with every variety of shrub and flower”.

Hafod has had a chequered history since those glory days, and by the mid 20th century the landscape was being planted with serried ranks of conifers, its gardens long forgotten and the great mansion stripped of its fixtures and reduced to rubble with dynamite.  Many British country houses met a similar fate in those years.  The circular wall of Mrs Johnes garden was breached by a forestry road, and its interior became a plantation of Sitka Spruce. When I first saw the garden it was through one of the two arched doorways to the garden, wreathed in brambles and dwarfed by the gloom of the densely planted 40 year old trees.   It seems inconceivable that in the last six years the road has been moved outside the original perimeter, the trees felled, and their stumps plucked from the soil by a giant yellow machine shaking the soil off the roots like a human hand weeding groundsel! 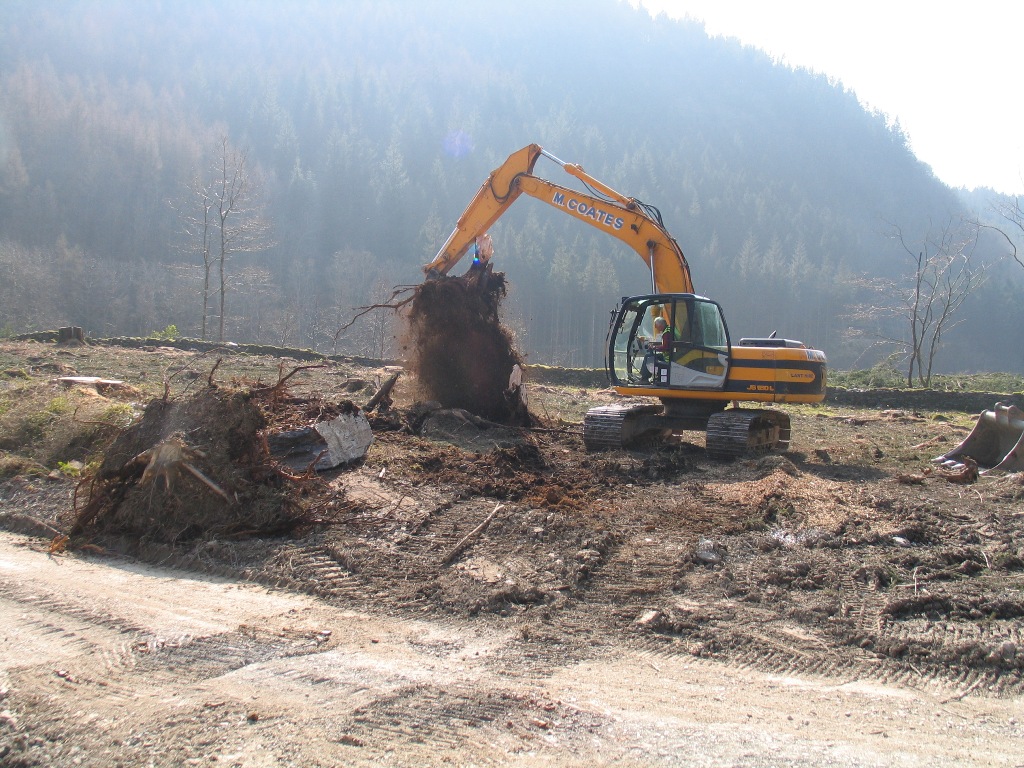 The wall was rebuilt, the cleared ground graded, and the path reinstated close to its original route. In 2012 we saw the first planting, of carefully selected shrubs and herbaceous plants which would have been available to Jane Johnes in 1788.  Several contemporary commentators called it an American Garden, and a number of gentry gardeners, some of them Jane’s friends and correspondents were creating American gardens at this time.  The new planting, designed by landscape architect Ros Laidlaw, reproduces the American flavour of the time, with shrubs, chiefly from the eastern seaboard of North America which were known to have been introduced to British gardens in the 18th century. 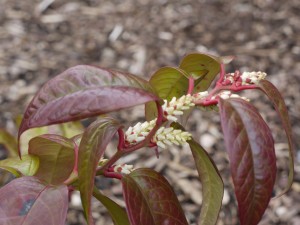 Leucothoe fontanasiana ( Fetter Bush) was introduced in 1765 from the USA 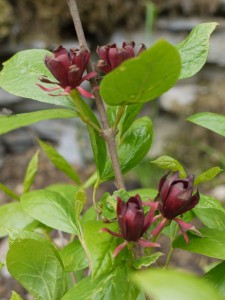 Calycanthus floridus ( Carolina Allspice)  was introduced in 1726 from the USA

It was a proud day for the Hafod Trust, which over the past twenty years has co-ordinated a partnership with the Forestry Commission to reinstate the ten miles of paths, the bridges, the viewpoints and the gardens.  Grant aid for Mrs Johnes’ Garden has come from the Cefn Croes Wind Farm Community Trust, The Finnis Scott Foundation, Tidy Towns Wales and many individual donors.  In future you could hold an afternoon tea party or a champagne reception in this tranquil enclosure.  You could even get married in the picturesque little church, Eglwys Newydd, just up the streamside footpath, or in the Hafod Stables meeting room, which is now licensed for civil ceremonies.

The mansion is unlikely ever to rise from its ruins, but the modern visitor with a taste for solitude, silence and starlight can spend a short or long break in the heart of the estate in the comfortably furnished Hawthorn Cottage ( Pwll Pendre) which overlooks a pool on the meadow between the mansion site and Mariamne’s garden. 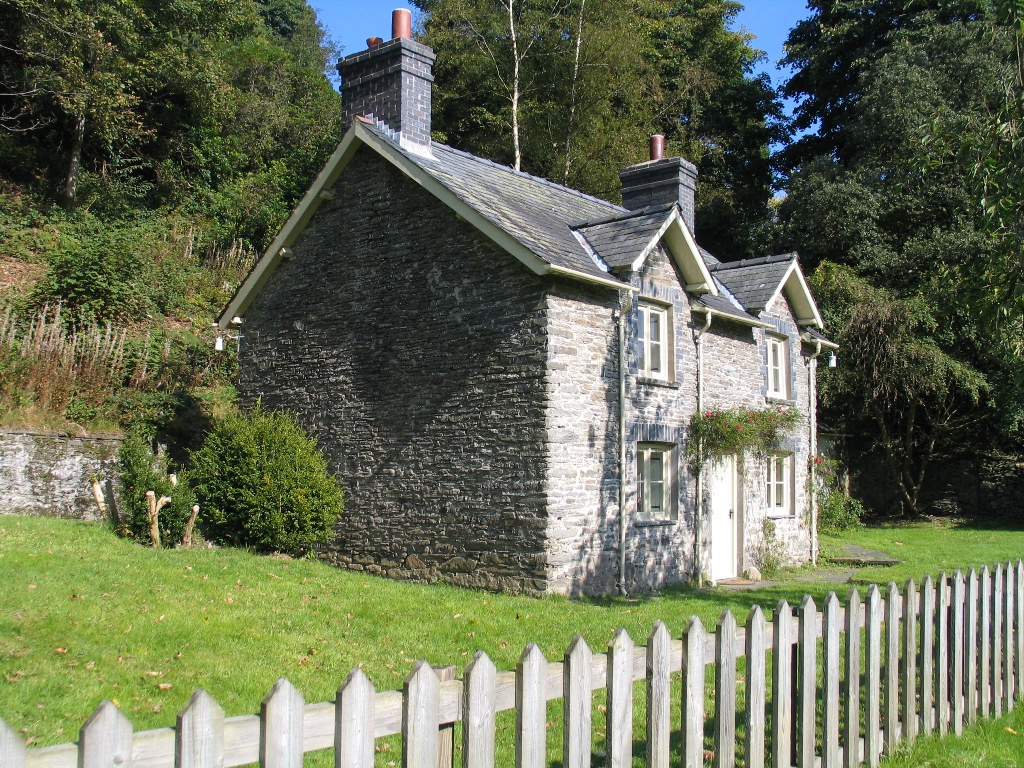 For more about the Hafod Estate  visit www.hafod.org

1 thought on “Hafod – A garden in the wilderness”