Last week I attended a Cadw Open Day at the Old College, where Dr Tim Palmer gave a lecture on the the building stones of which this Grade I Listed building is made.  The Old College has  suffered various set backs in its life:  the bankruptcy of its first owner, a devastating fire in the Chemistry department, the reconstruction of its south and middle sections, and the slow ravages of the erosive salt-laden winds.  We learned how new phases and different architects brought in different materials, so that the Old College now boasts at least nine different sources of stone.

Historically the most interesting work is that of J.P. Seddon, designer of the building destined to become Thomas Savin’s grand railway terminus hotel.  He used Cefn sandstone from Ruabon for the walling and  Box Ground stone from Bath for the carved window dressings and details.  Keen to achieve a vibrant range of colours he used Hanham Blue from Bristol for the exterior pillars which flank windows on the seaward side, and ornamental marbles from Devon and Cornwall for interior pillars in the Dining Room and Bar ( now the Seddon Room). The intricate gothic main staircase proves to be made largely of a long forgotten composite: Ransome’s Artificial Stone, which betrays its man -made origins only by its remarkably uniform texture.  Externally, when completing the upper storey of the building to the University College’s more parsimonious requirements, Seddon used dark concrete blocks, interspersed with diagonal bands of pale Dundry stone.

The rather austere central block by Ferguson uses a different stone, Grinshill sandstone from near Shrewsbury, while 20th century restorations brought in a sandstone from Durham, which is weathering as severely as the Bath stone which it replaced.

When rebuilding the southern wing of the College  as the Science Wing in 1887, Seddon commissioned his former pupil C.F.A.Voysey to design the distinctive triptych mosaic which still adorns the curved end of the building, looming over the crazy golf and the castle.  It depicts pure science being respectfully presented with the fruits of applied science ( a train and a ship) by two acolytes.  Seddon recorded in 1898  that some months after the mosaic was installed, the college authorities objected to  Voysey’s religious symbolism in the central panel, which ‘suggested a conflict between science and dogma’. Seddon was obliged to alter the finished mosaic, such that Science now sits on an unadorned wall. 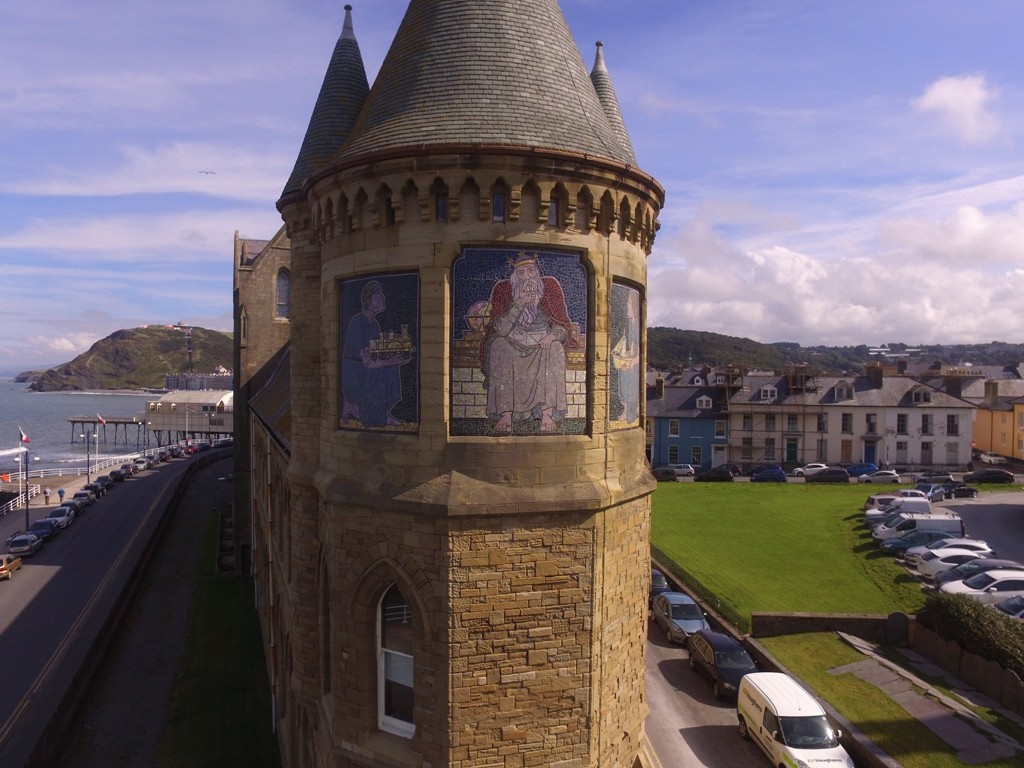 But the actual manufacturer of the mosaic is not generally known.  Tim Palmer drew our attention to another of J.P. Seddon’s commissions in Aberystwyth, the restoration of the ancient church of St Padarn, in Llanbadarn Fawr in 1878.  Visitors  “in the know” can peel back the red carpet in the crossing to reveal the extensive mosaic floor, in which geometric designs of tiny 1/2 inch tesserae frame regularly placed encaustic tiles depicting saints and angels.  Adjoining the red marble steps to the chancel, the mosaics take more fluid naturalistic designs of leaves and flowers. 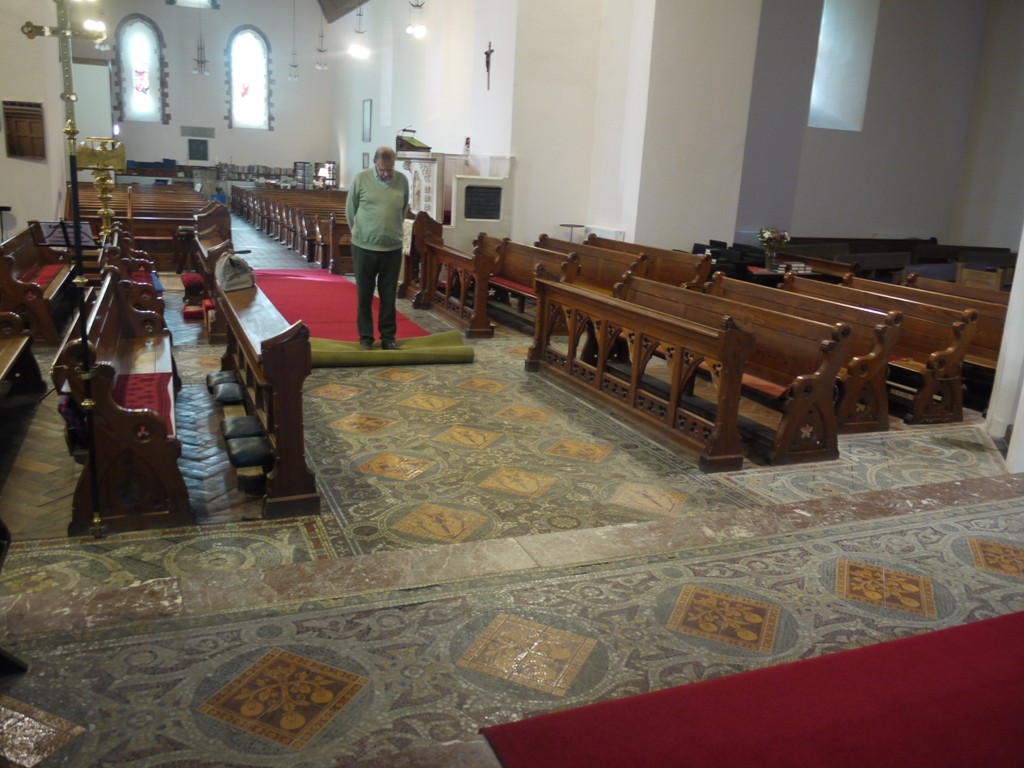 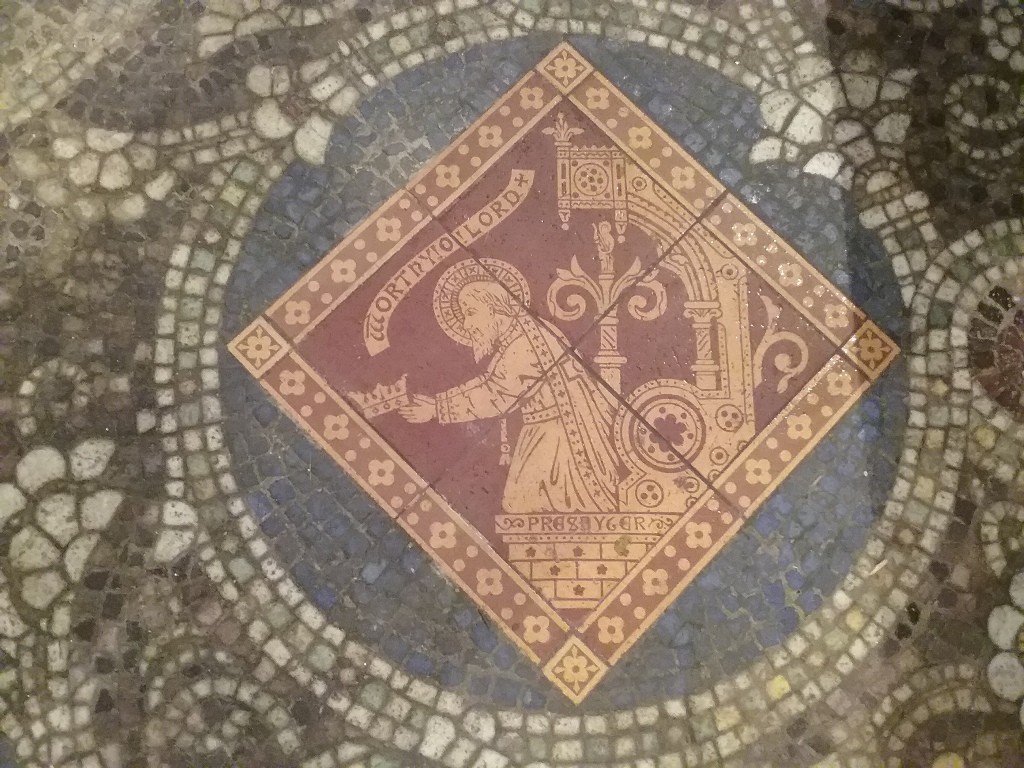 The church records held at the Ceredigion Archive  show that these mosaics were the work of Jesse Rust of Battersea, who used recycled glass and ceramic pigments to create a rainbow range of tiles and tesserae.  The actual designs were assembled in the workshop, with the upper face stabilised on glued paper, which was stripped away to reveal the picture once the sections were stuck in place on the church floor.

Tim Palmer drew our attention to the strong likelihood that Voysey’s mosaic on the Old College was also manufactured by Jesse Rust of Battersea.  Juxtaposing the colourful image of Science  with the design sample held by the Victoria and Albert Museum, showed a very good correspondence with the palette of colours his firm offered. 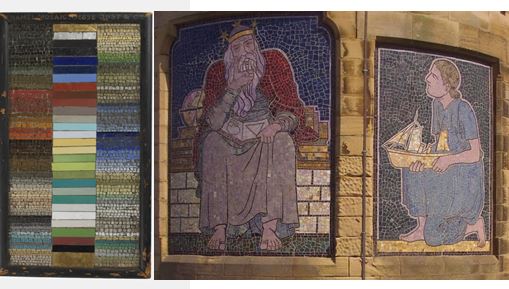 A bit of reading around the topic shows the prominence of Rust’s elaborately decorative mosaics in the late 19th to early 20th century.    There is a  Listed Grade II astrological mosaic by Jesse Rust at the foot of the Marble staircase in the Hotel Russell, (built 1898) in Russell Square, London, and another  at the old London, Edinburgh and Glasgow Insurance Company offices at 194 Euston Road. 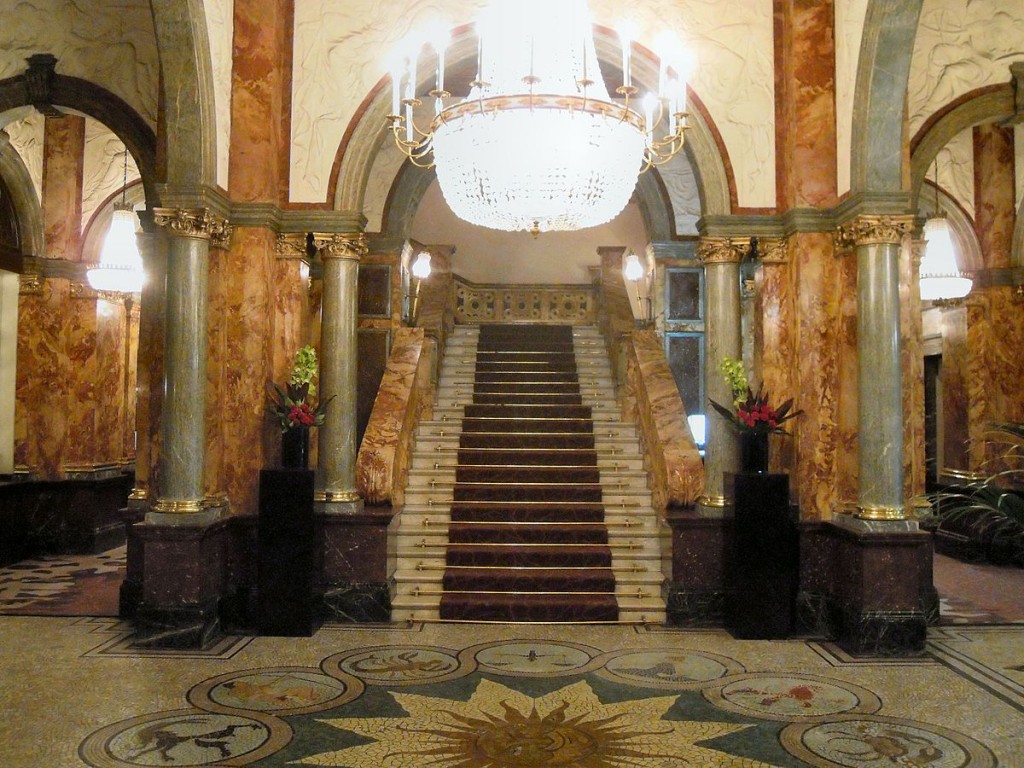 There is a very colourful floor, with flowers, animals and bees,  recently restored in the foyer of Battersea Old Town Hall and a  World War I memorial floor in John Nash’s circular church All Souls, Langham Place.

Other Jesse Rust work was more functional and by the early 20th century his glass tiles were particularly favoured for lavatories.  Fine examples survive in the painstakingly restored  Sanitary Court at Peckham Rye station. http://www.benedictolooney.co.uk/peckham-rye-station-north-wing-sanitary-courts/ 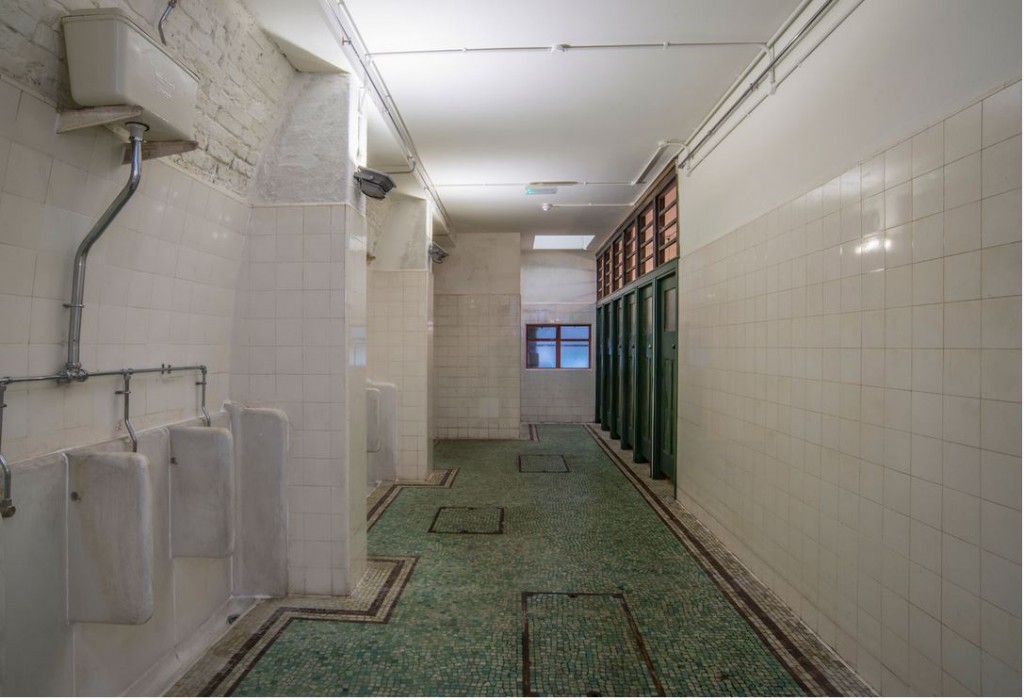 A report in the Times 16 June 1904 shows that he provided the floors for its 150 bathrooms and lavatories, and the floor-to-ceiling tiling in the refrigeration rooms in the Savoy Hotel.

Prior to the rebuilding of the Old College Science wing in 1887 there are a number of instances of Seddon and Rust working together.  In 1875 Rust supplied J.P. Seddon with mosaics for a new Victorian Gothic church at Ayot St Peter, Hertfordshire which he designed in contrasting shades of red, blue and white brick.  Jesse Rust supplied a particularly jolly mosaic font in the interior, and even a blue mosaic clock face on the church tower. 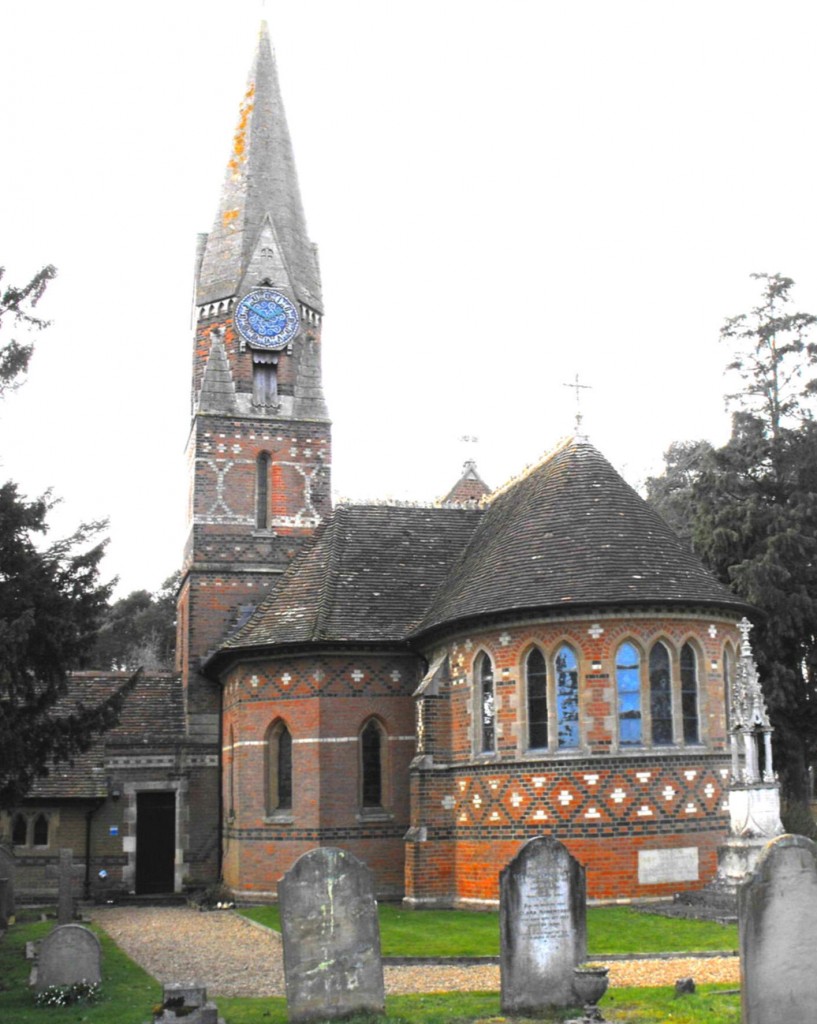 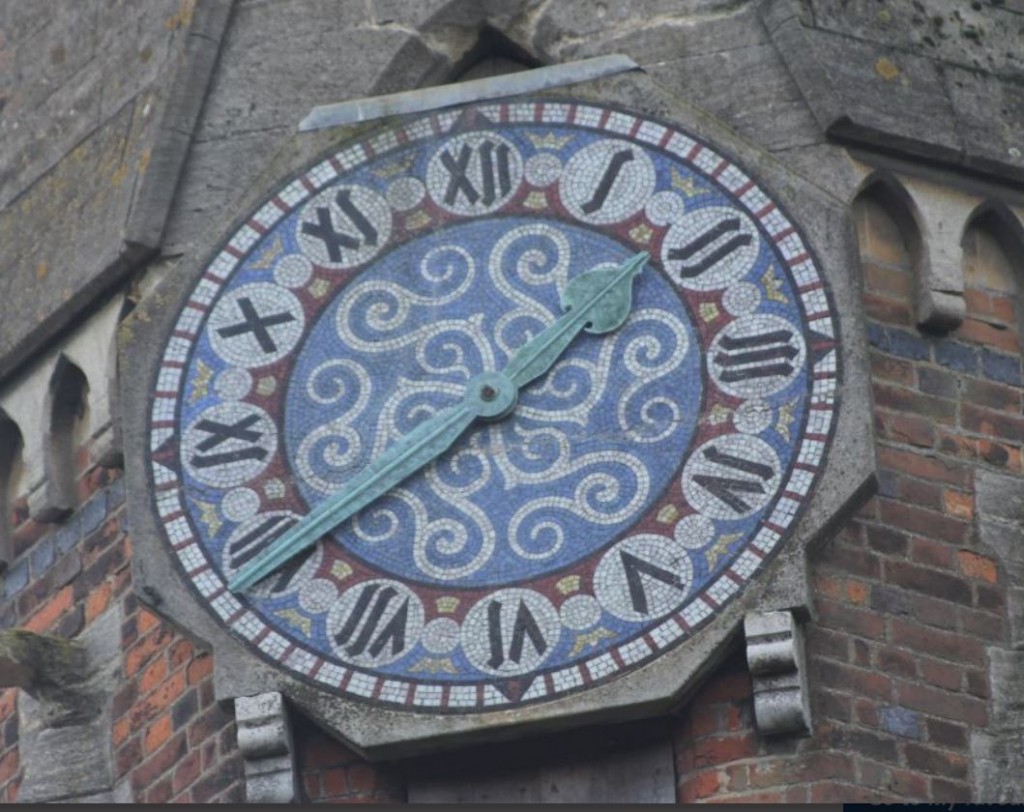 The Llanbadarn Church floor dates from 1878.   Seddon also did work designing stained glass for Rust, and he designed the front facade of his Battersea premises.

Many of Rust’s functional mosaic floors have probably been cleared away and replaced, for with the passage of time individual tesserae become detached and come away with the sweepings, leaving flaws in the design and dirt traps in the floor.  Llanbadarn Church needs substantial grants to return the mosaic to its former glory, and then dispense with the protective carpet.   But it is pleasing to believe that the Old College building  boasts  probably the most westerly Jesse Rust mosaic. Further research may even reveal the invoice in the University archives.