When I started writing about the Aberystwyth’s war memorial I drew only upon my own imagination in describing the striking nude at the foot of the column as “a naked woman emerging from a thicket”.

Since then I have searched the internet for similar images using various search engines and search terms, and at last my quest bore results, in the form of pictures on the website of a professional conservationist and restorer in Rome.  Here was the self same girl! http://www.art-conservation.it/rutelli.html 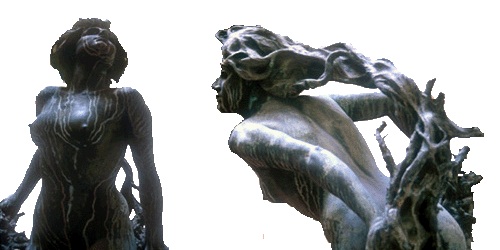 Marco Demmelbauer  tells me that he worked on this Rutelli sculpture many years ago. It is privately owned and can be seen in the courtyard of an apartment block, at Via Quattro Fontane n.18  in Rome.  The sculpture has a name too!  Not quite “Humanity emerging from the Horrors of War”, but  “Verità esce dai rovi”,   which translates as “Truth comes out of the bushes”.  I feel vindicated indeed!

It now seems clear that our Aberystwyth war memorial sculptures are from re-used moulds, and have elder sisters elsewhere in Europe.   In my last blog I pointed out that the Winged Victory by Rutelli on top of our memorial had already been poised on a monument in Palermo since 1911.  I am grateful to Marco Demmelbauer for pointing out that she also stands on the right hand column in front of the Monumento Nazionale a Vittorio Emanuele II in  Rome.  This also dates from 1911. 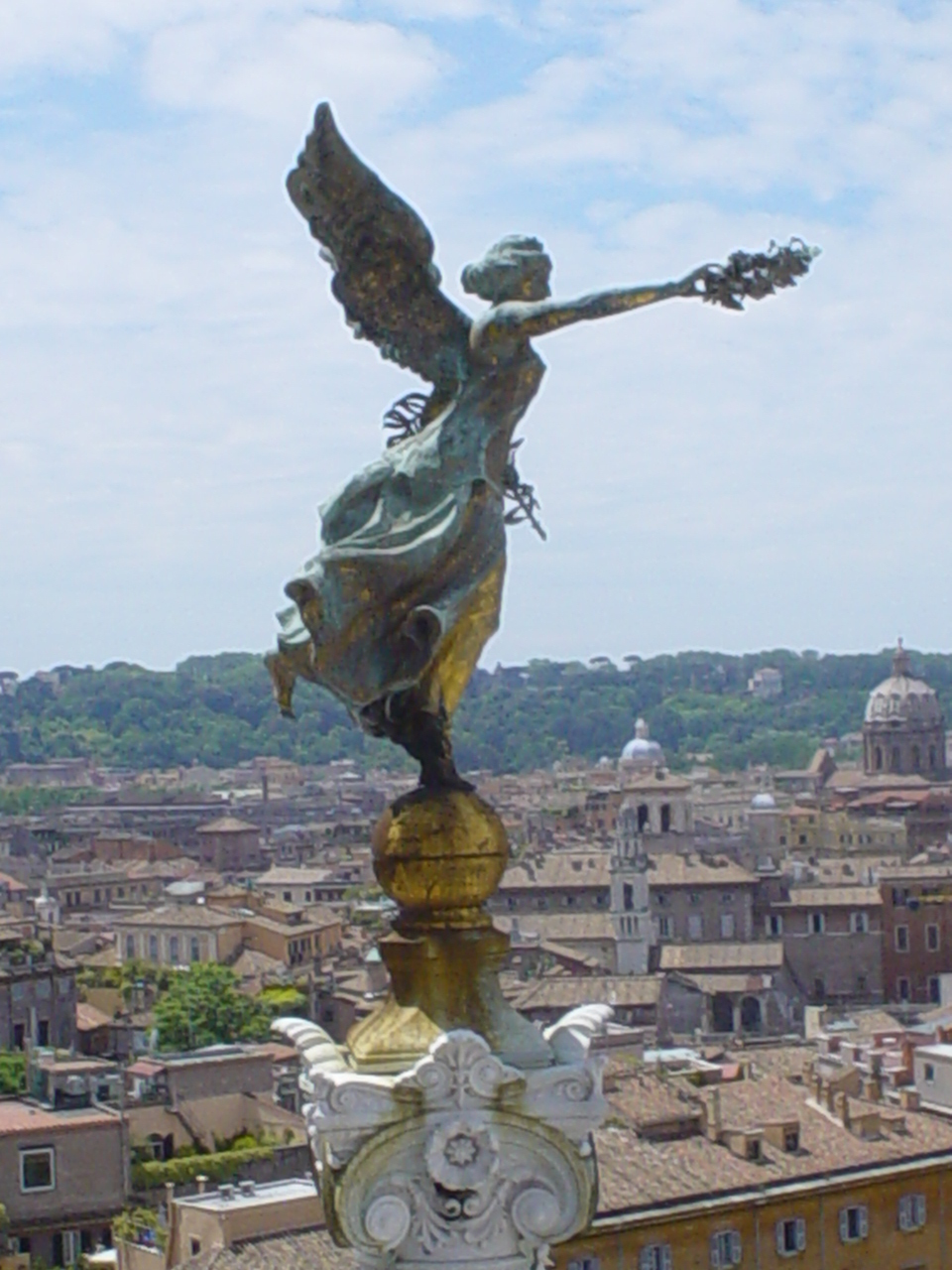 Winged Victory by Rutelli on a column in front of the Monument to Vittorio Emanuele II in Rome
Photo: Marco Demmelbauer

Winged Victories were not however the sole preserve of a single artist.  The original Victory ( the Goddess Nike) was discovered in 1863 in Samothrace, and is one of the great treasures of the Louvre.  She was fashioned in Parian marble about 190 BC.  A few extra fragments of her, the right hand, a finger tip and thumb have turned up, but her arms and head being missing has left scope for the re-interpretation of the figure in the late 19th and 20th centuries.  Rather remarkably the two tall Roman columns bear two different Winged Victories, one by Mario Rutelli and the other by another sculptor Arnoldo Zocchi. 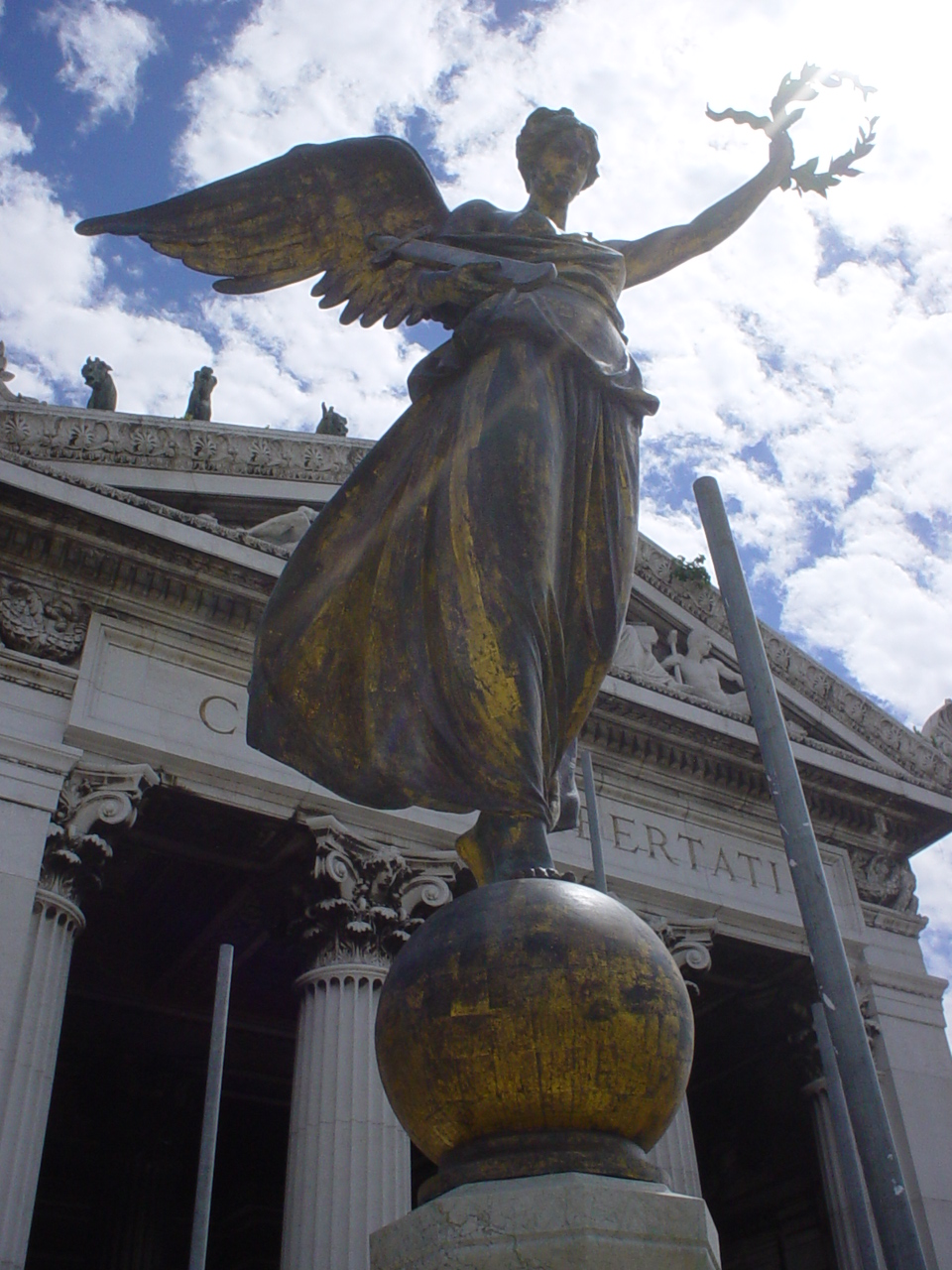 Winged Victory by Zocchi on the other column in front of the Monument to Vittorio Emanuele II in Rome.
Photo: Marco Demmelbauer

It seems that there were certain criteria for these turn-of-the-century Nikes.   Unlike Truth/Humanity, a Winged Victory is modest, her long draperies rippling in a strong breeze, and she holds aloft the laurel wreath of victory.  She stands upon a sphere, and carries some kind of object in her other hand. Here the interpretations vary, Zocchi provides a sheathed weapon, Rutelli some kind of foliage. 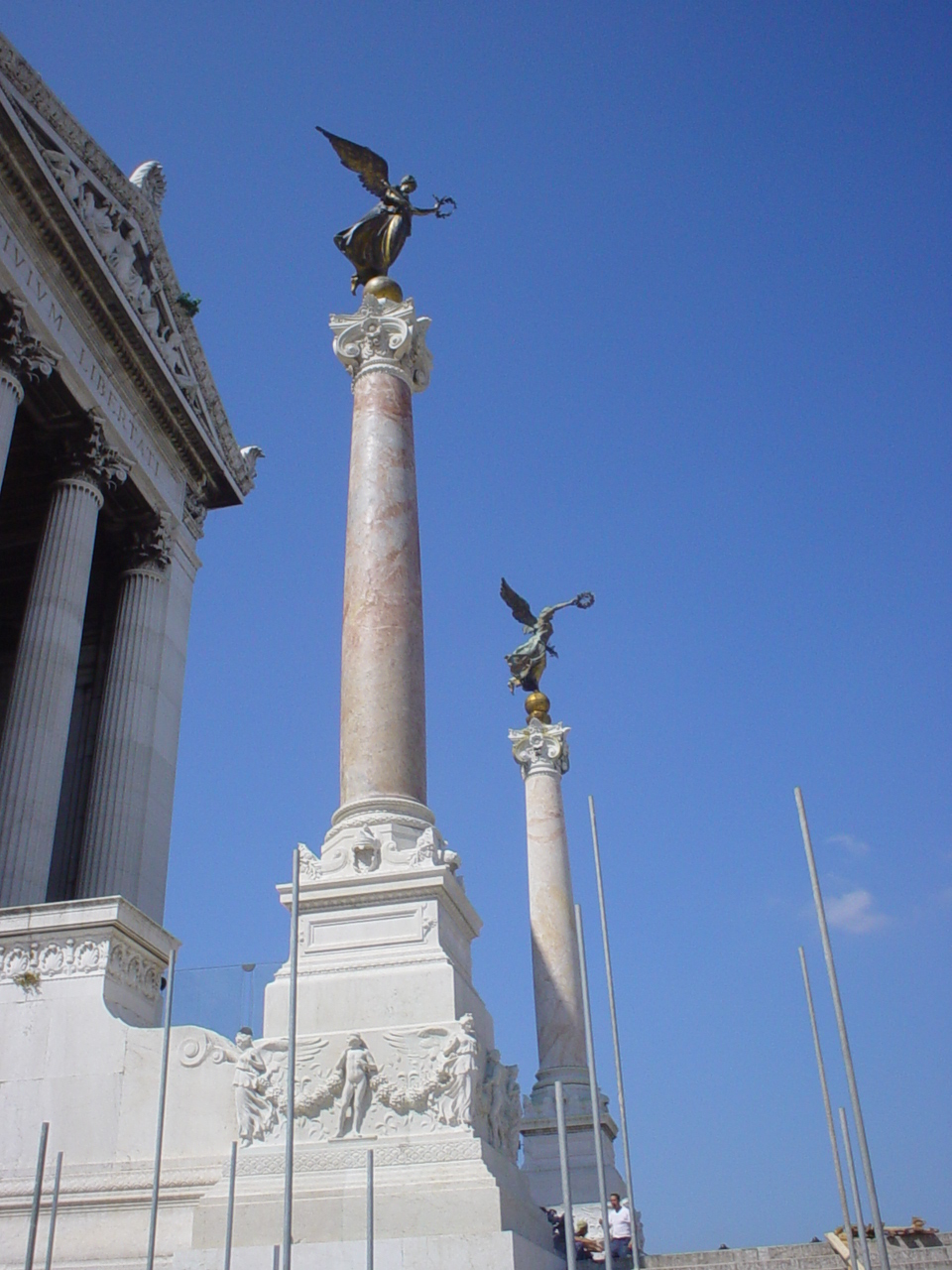 Winged Victories by Rutelli and by Zocchi on columns in front of the Monumento Nazionale a Vittorio Emanuele II in Rome.
Photo: Marco Demmelbauer

Exactly whose influence led to Rutelli tendering a design for a war memorial  utilising two of his pre-existing works for the Borough of Aberystwyth has yet to be revealed, but my guess is that Lord Ystwyth had a good deal to do with it.

2 thoughts on “Truth comes out of the Bushes”