Cruising the works of Italian sculptor Mario Rutelli, I came across another work of his, the memorial to Anita Garibaldi on the Juniculum Hill in Rome, which was created in 1931.

If ever we need a monument to multi-tasking this must surely be it.  Poised upon a rearing steed, brandishing a pistol whilst breastfeeding her infant son, the Brazilian wife of Guiseppe Garibaldi is represented as a heroine of mythic proportions. Fashioned 83 years after her death, to embellish the seventh and final resting place of her mortal remains, there is no reason to consider this an accurate portrayal of the woman, but of an ideal. 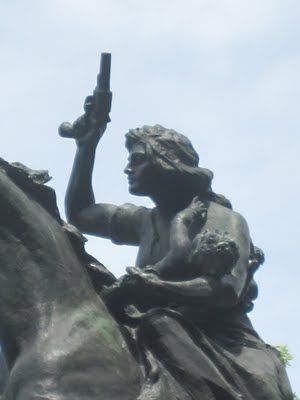 Rutelli’s Anita is the stuff of legends – mounted on a rearing horse (an exceptional feat of engineering) she brandishes a pistol in one hand while holding her nursing son close in the other arm. Photo: Will Hobbs

Garibaldi was an active Republican dedicated to the liberation and unification of Italy.  Finding it politic to depart for South America, he soon became involved in fighting for  independence in Brazil.  During this swashbuckling existence he acquired an 18 year old  Brazilian wife, Ana Maria de Jesus Ribeiro, who often fought at his side, dressed as a man, and is credited with greatly improving his horsemanship. During a five year lull in revolutionary activity in Montevideo he worked as a schoolteacher and fathered four children with her.

He and his family returned to Italy to join the conflict between the revolutionary army and the invading forces of Napoleon III.  Briefly the revolutionary army won the battle of the Juniculum Hill in 1849 and repelled the French.  However two months later the Roman Republic was defeated, and he and Anita were fugitives.  Four months pregnant with their fifth child and ill with malaria, Anita died, at a farmhouse near Ravenna, in her husband’s arms, and was hurriedly buried in an unmarked grave.  She was just short of her 29th birthday. 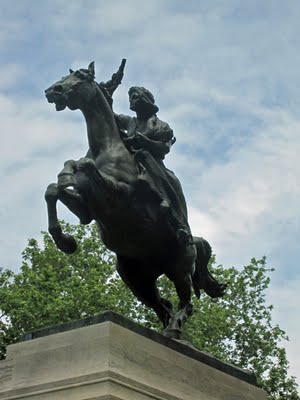 Oddly, when I studied History O level many years ago, the examiners had determined that we should study this period of Italian history.  So I used to know quite a lot about Count Cavour, Victor Emmanuel II, Mazzini, and Garibaldi.  At  an age when I had learnt  almost nothing about 19th century British history it seemed an irrelevant and isolated bit of knowledge, most of which I promptly forgot.

However everything forms connections eventually.  And the connection with Aberystwyth?  Well, it confirms my suspicion that the sculptor Mario Rutelli was in his element with an imaginative brief, and his female figures are rarely sedate in their bearing.  By contrast how bored must he have been with his commission for the bronze full figure sculpture of Edward Prince of Wales ( Edward VIII) in the robes of Chancellor of the University College of Wales in 1922.  It too survives, seldom remarked upon, in the narrow strip between the Old College and the sea.

I am grateful for permisison to reproduce the photographs of Anita’s monument, see http://willyorwonthe.blogspot.co.uk/2011/06/beside-every-great-man.html

3 thoughts on “An Image of Multi-tasking Womanhood”