It is not often you see a listed building smashed to dust in front of your very eyes.

The 11th of July 2008 was such a day though, on which we stood and watched with disbelief as the largest demolition crane ever seen in Aberystwyth methodically chomped its way through the burnt shell of this landmark chapel crammed into the sloping plot between Mill Street and Powell Street.

The chapel was a huge building, its curved gallery of pitch pine seating supported by elegantly fluted  iron columns.  It had long lost a viable congregation, though I remember attending a big school carol service there in the 1980s. While an undeniable hulk dominating the town, its fine interior, and the portentious facade at the Powell Street end had contributed to its listed status and its eventual downfall.  Saving these features and creating a sympathetic conversion to flats at the same time would have been a considerable challenge. Planning permission for such a scheme was granted, but work never began.

On the preceding Friday in July the empty building had caught fire, and although only metres from the fire station its roof was soon well alight. By morning, the smoke scarred windows and collapsing roof ridge caused the closure of the nearby roads to traffic. 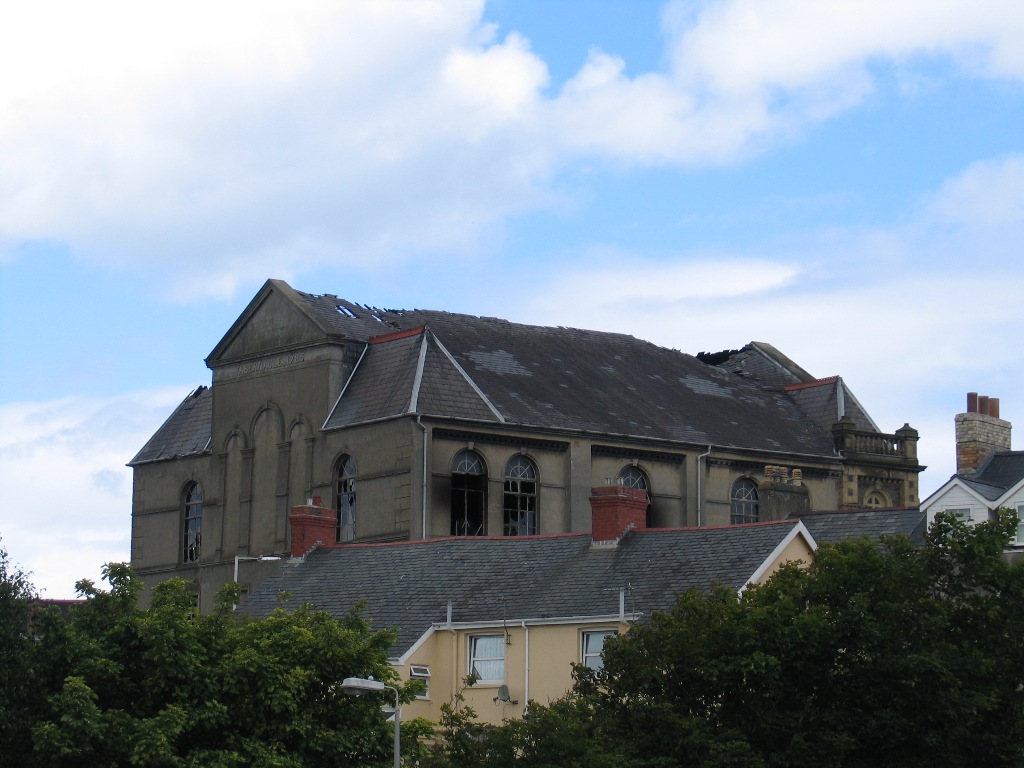 The Calvinistic Methodist Tabernacle Chapel, built in 1878 and gutted by fire 130 years later

The following Friday the gigantic crane began at the Mill Street end reaching great clawfuls of masonry with the grab on its telescopic arm and advancing inexorably through the building.  The tiers of seating, the elegant metal pillars, the pitch pine interior were all soon reduced to a tangled mass under the caterpillar tracks of the machine.

The Powell Street facade was especially grand, and almost independent of the rest of the barn-like structure.  Here it was not rendered but built of dressed local stone, with pillars, balusters, and seven tall round-topped windows and lintels of Cefn Sandstone from Ruabon  stone.  It seemed untouched by the fire.  By the early afternoon, only this facade, and the return walls built in the same material still stood.  Naively we assumed this would remain and could still front the eventual conversion and retain a little historic character in this part of the town. To the side of this facade, and enclosed by substantial arrow headed iron railings was a tiny shady patch of grass, barely a garden.  This had been one of Aberystwyth’s secret spaces. For in the centre of the little lawn was a plinth on which stood a bronze statue of a  winged youth, with a laurel wreath on his curls and a bundle of ragged palm leaves cradled on his arm.  His foot balanced on a sphere of bronze and on this sphere are engraved in bold capitals the names of fourteen men.  These were the members of Tabernacle chapel killed in the First World War.  Like the monumental town memorial, this graceful piece was also the work of Mario Rutelli.  By the morning of 11 July 2008 it had been removed from the site.

The demolition crane just kept on working its way through the building.  Effortlessly it reached up from the old chapel floor to grasp the towering pediment of the Powell Street entrance and casually brought it crashing to the ground.  Methodically it tugged off the coping stones of the parapet. The immaculate turned stone balusters snapped like so many broken teeth.  Then it chomped up the chimneys at the two corners, the seven elegant first floor windows, the little balcony over the sturdy pillared portico.  The massive freestone quoins of the corners were the hardest to shift and among the last stones standing.  Supported on the inside by the two chimneys these massive corners would surely have braced the facade.  Finally there was just the ground floor with its three tall doorways and four windows standing.  And when these crashed to dust the workmen carried away the white-lettered Tabernacle board and gave it to a neighbour as a souvenir. 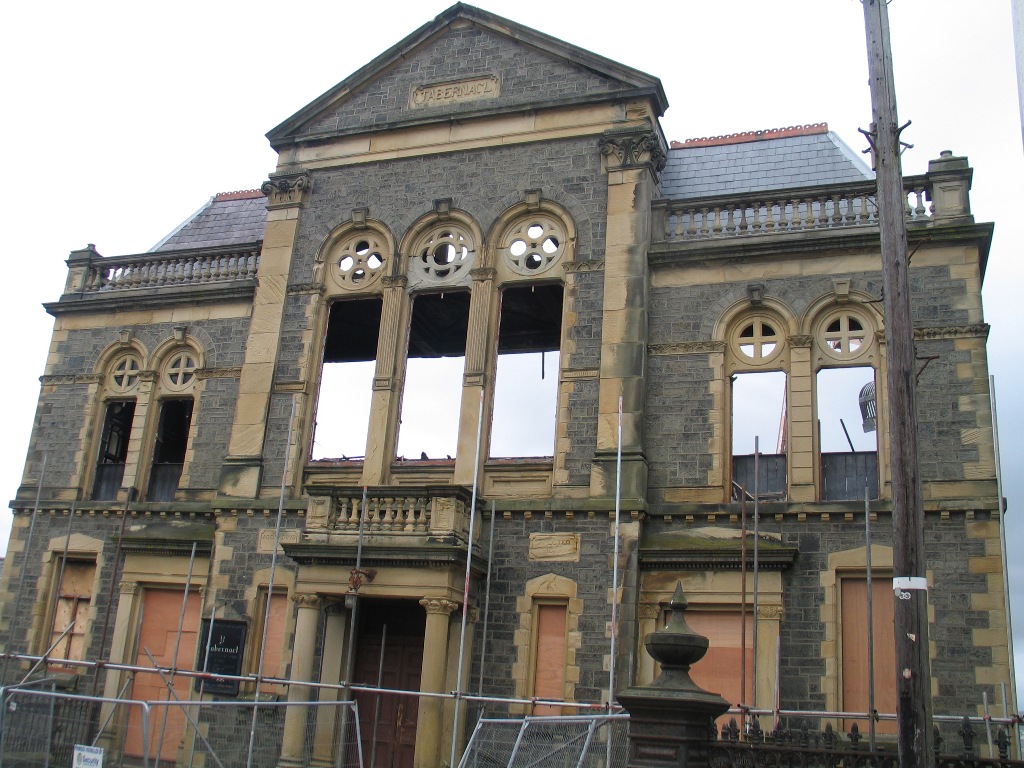 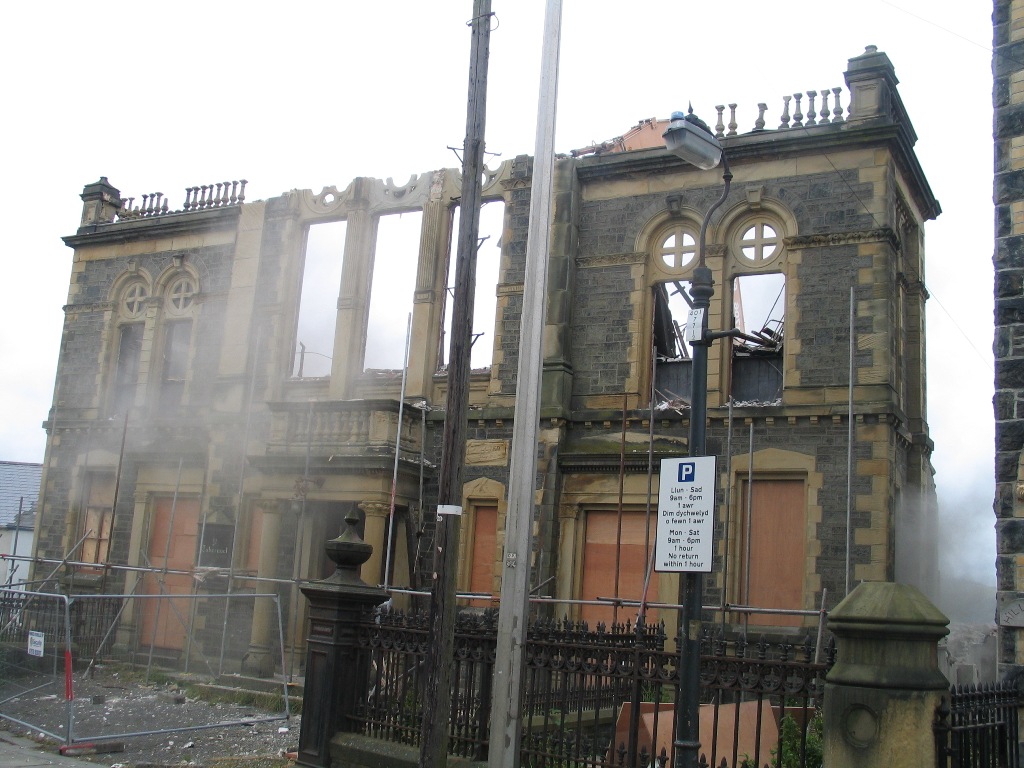 The demoliton crane soon nibbled away the facade 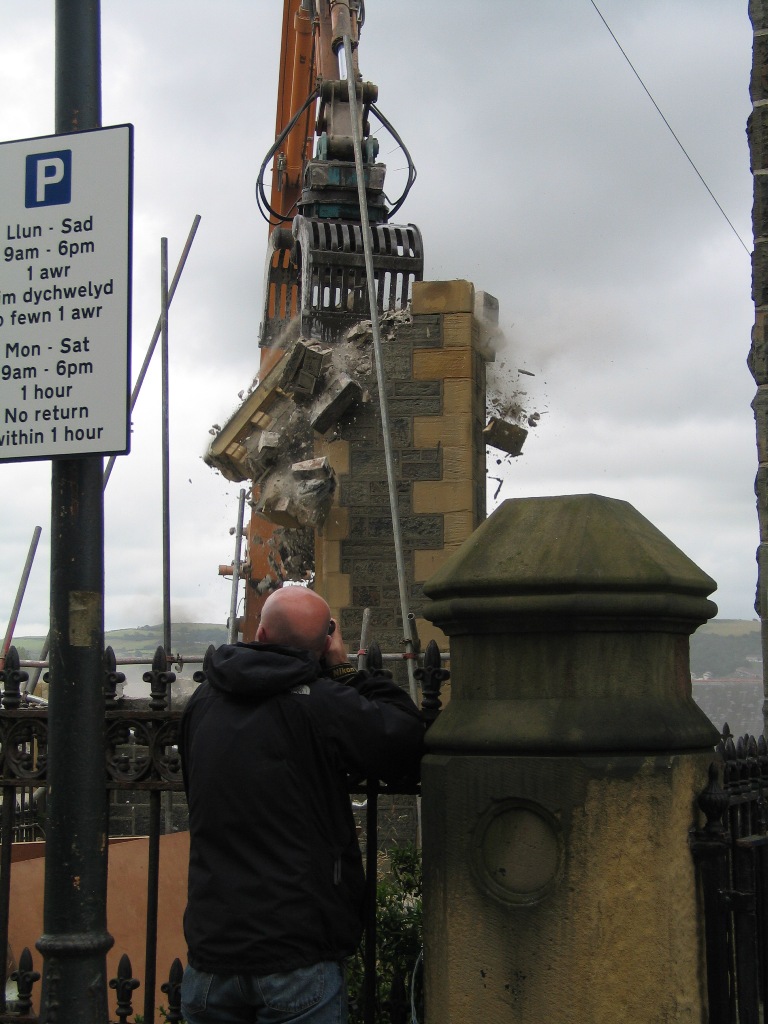 The massive quoins and chimney corners were difficult to demolish 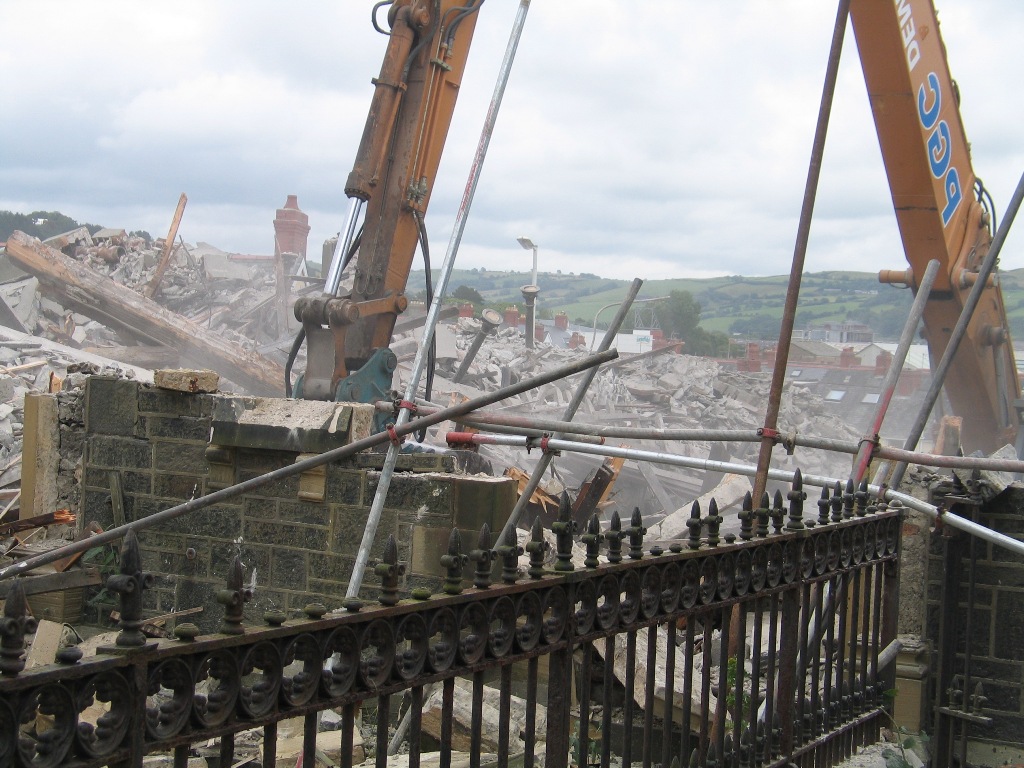 A new view opened up towards Penparcau. The railings of the little War Memorial garden remained. 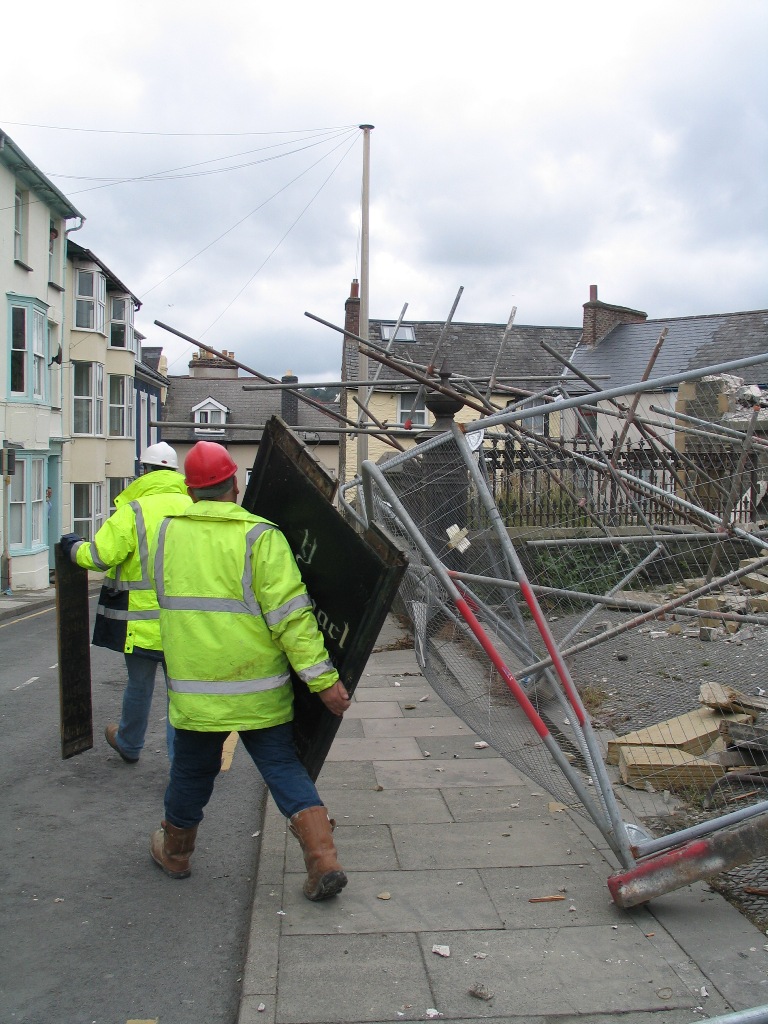 Finally the Tabernacle board is given away as a souvenir

That night the crane left town, and a great gap allowed a view from Powell Street out to the hills of Penparcau.  The site was soon surrounded by high fencing and the wreckage was gradually carried away.  The little garden is a forlorn tangle of brambles now.

Rutelli’s pretty monument eventually found a refuge in the Ceredigion Museum, eight sturdy volunteers carried it up the stairs and strapped it to a pillar of the Coliseum where it can be admired today amongst the varied exhibits.   The accompanying information sheet states that the developers, Merlin Homes, intend to eventually restore him to his little garden at the corner of the site.  But there has so far been no development, and this summer will be five years since the fire. 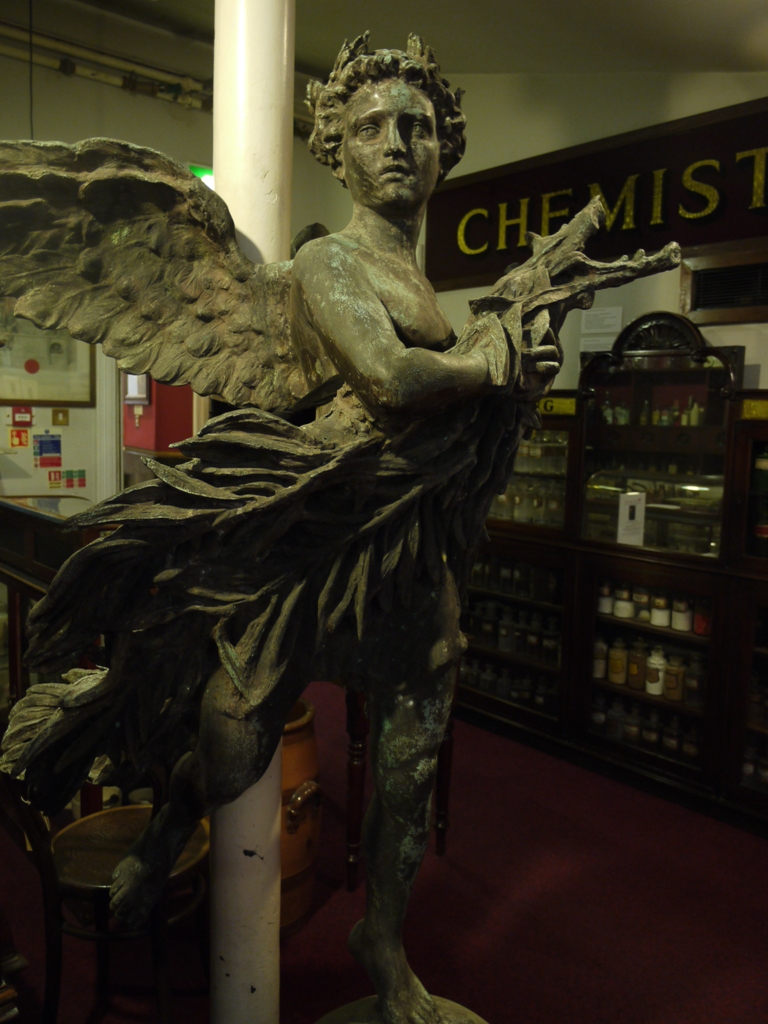 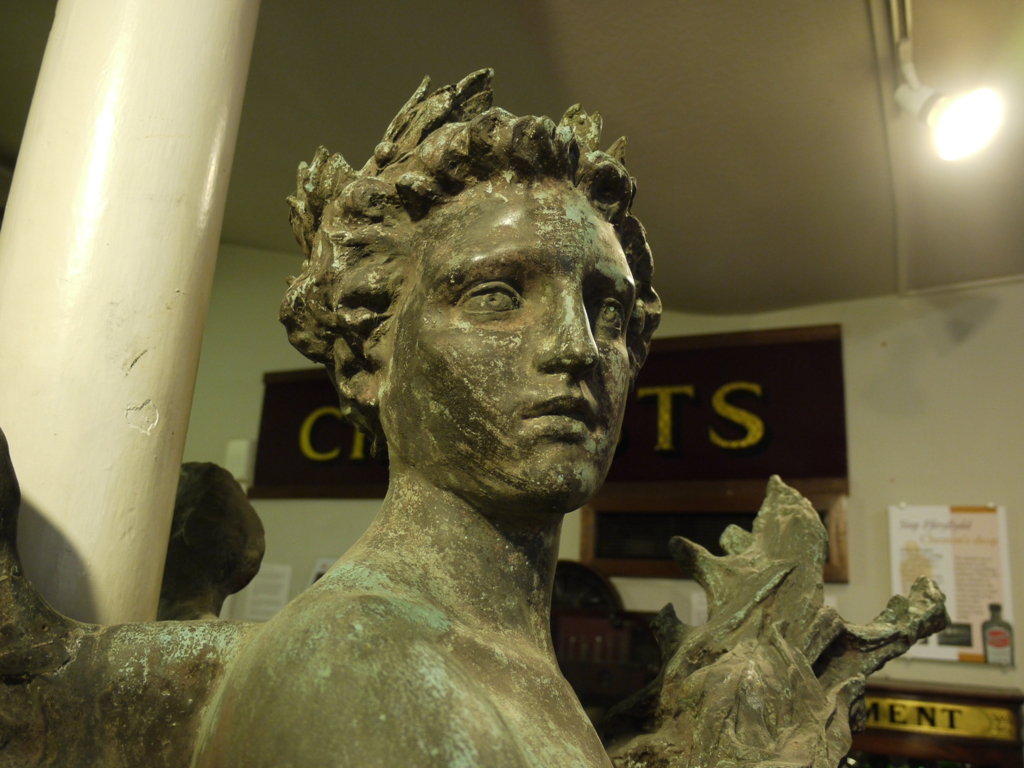