I’ve had a lot of interesting comments arising from the blogs on Rutelli’s Aberystwyth war memorial sculptures. In this town we like our handsome nude woman, and people often stop to take her photograph.  She is more eyecatching than the traditional assemblage of weapons or the lone and gloomy soldier of so many other towns.

It was a real find to discover she also exists in a garden in Rome ( see Truth comes out of the Bushes) .  But as correspondent ‘dredwina’ points out, it is not unusual in the 20th century  to make five or six editions of a bronze, declaring them at the outset, but not actually creating them all until buyers turn up.  Just as there are at least three Rutelli winged victories in the world, there are, for example, two locations where Churchill and Roosevelt chat upon a bench. Spotting the duplicates could become an absorbing hobby.

The original model, however, was a one-off and  sources have come up with several  oral histories on the subject.  Helen Palmer  writes:- I had a story that the model for the busty lass was a Belgian girl who – as a very elderly lady – visited Aberystwyth some time in the 1980s, but I cannot remember the source and maybe it was all baloney!

While historian Gerald Morgan had a slightly different version – When showing a group around Aberystwyth I was told that the naked lady had been modelled on the wife of a local shopman, Ernie’s Chips or some such, and that as an old lady she had returned to Aberystwyth in the ?1990s and been interviewed by the Cambrian News! Again, I’ve never checked it out!!

Possibly these are both spurious claims.  More likely the girl in question was in Rome, and since she would have been  at least 16 when she modelled she must have been extremely old by the 1990s!

By contrast ‘Tone’s account of repairing the part-severed head of Edward Prince of Wales on the seafront stands up to robust scrutiny. ” At the time when I was employed as a Art/Ceramics technician at the then Visual Art Dept. Llanbadarn Road, on more than one occasion I had to travel to the “Old College” to repair Edward’s neck as an attempt was made to remove his head at the end of the academic year by, it was said, students from Pantycelyn Halls of Residence.
He wasn’t a tall prince, though could be described as handsome, It was an easy to repair as I could reach the damaged area without the aid of steps.
Although as you say “seldom remarked upon” he is certainly marked upon by the use of the hacksaw!”

I climbed up the plinth to verify, and established both that Tone is a good deal taller than myself, and that the repaired hacksaw groove on the back of the neck is plain to see. 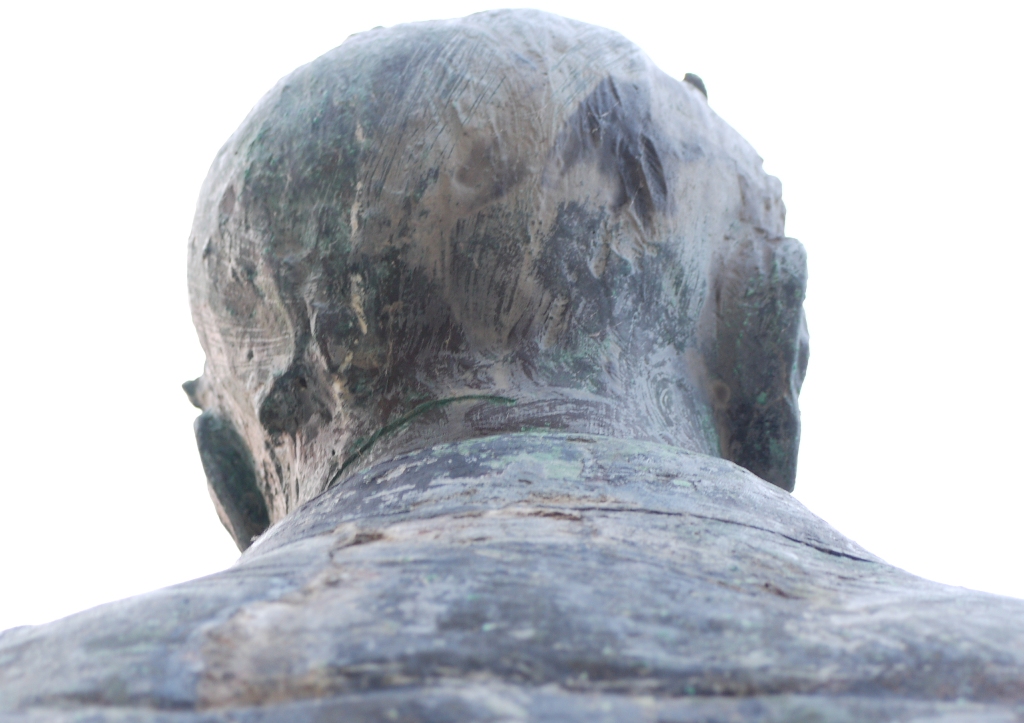 I don’t think we will find other editions of this sculpture tucked away incognito.  It is generally understood to be the only life-size bronze of Edward VIII anywhere.  His abdication in favour of marrying Wallis Simpson put paid to what might otherwise have beena lustrous career in commemorative statuary. 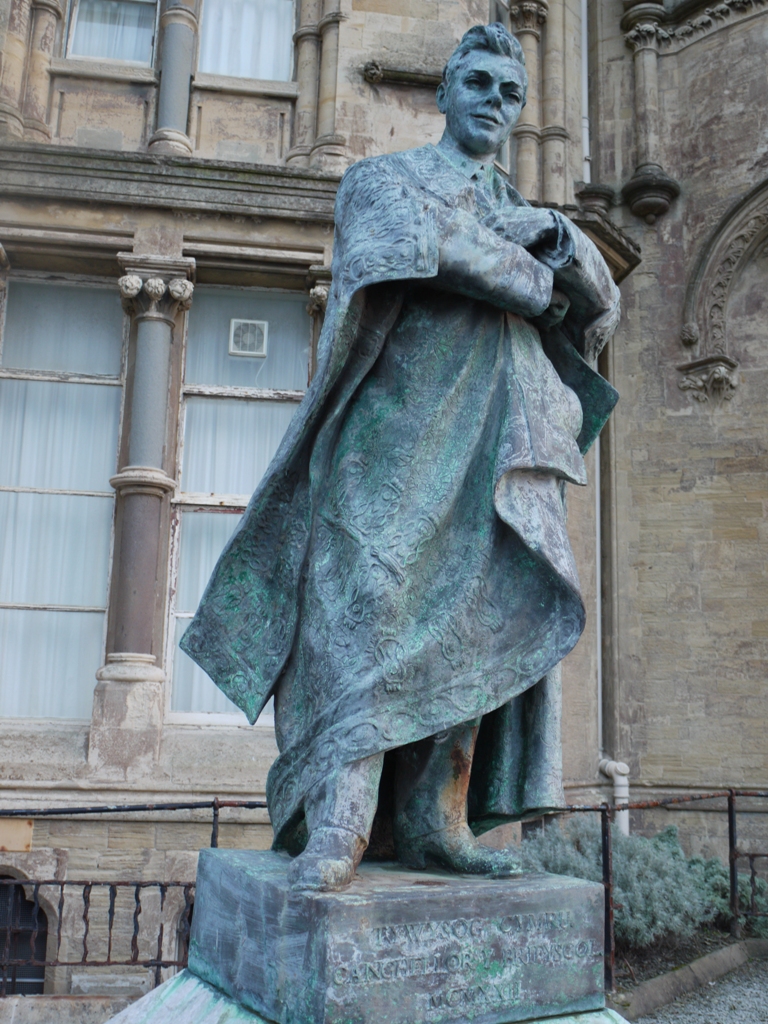 Edward Prince of Wales, Chancellor of the University College of Wales 1922, by Mario Rutelli

Arthur Chater also comments  “And I believe that students once sawed off, or tried to saw off, his head. There is certainly a nasty scar on the side and back of his neck. The statue as a whole is rather good I think, with a nice art nouveau trail to his gown, but the face is appallingly weak – maybe though this is in fact a perceptive insight into Edward’s character on the part of Rutelli?”

His gown is indeed very fine, and richly ornamented.  His face looks strangely faun like, though it is true that in photos as a young man his tip tilted nose and and boyish look is indeed apparent.  If this was modelled in 1922 he was less than 28 when the likeness was taken. 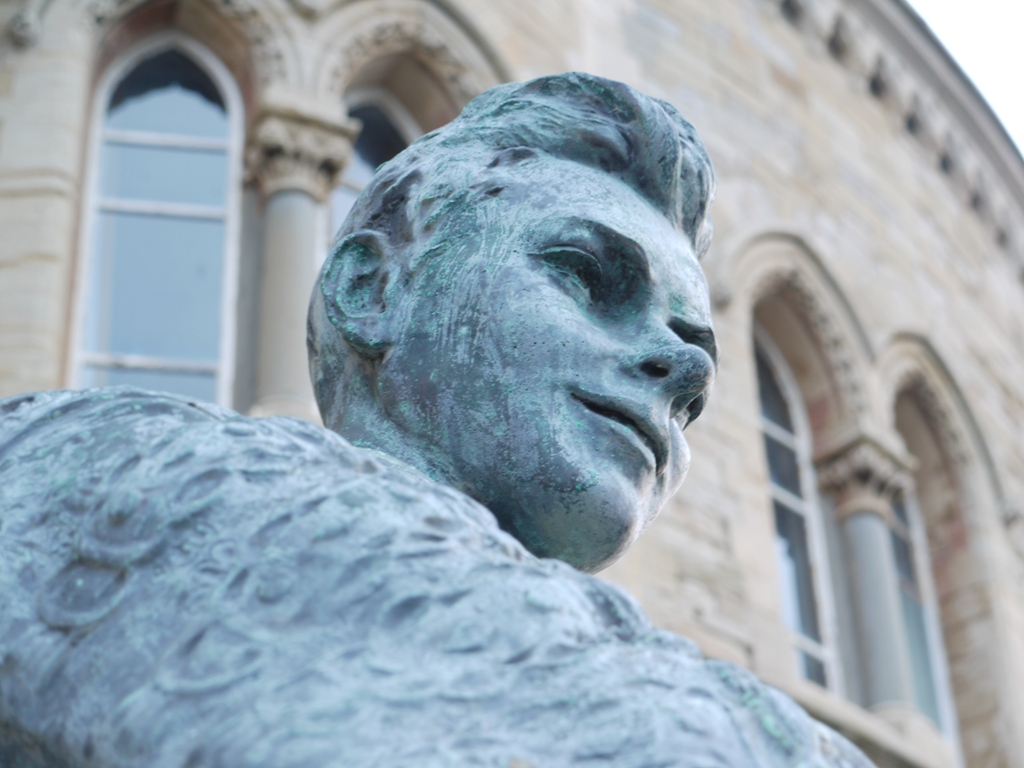 Detail of Edward Prince of Wales, a likeness from or before 1922 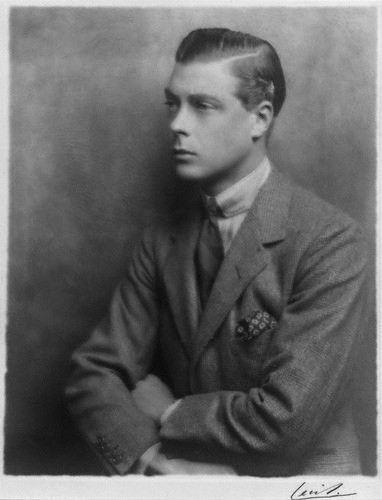 The Prince of Wales photographed by Hugh Cecil Saunders in 1925

Speaking of fauns, Mary Burdett Jones has reminded me that I have so far neglected Rutelli’s first commission in Aberystwyth, the war memorial to 10 members of the Tabernacle chapel who died in the First World War.  Tabernacle Chapel?  Yes, that is another story…

2 thoughts on “More on Rutelli’s sculptures”