For the first time in 28 years, I travelled with members of my family on the Vale of Rheidol Railway, which puffs its way sedately from Aberystwyth to Devil’s Bridge, laden with tourists. My previous journey was described in this blog on February 10 2014. http://www.letterfromaberystwyth.co.uk/historic-derailment-on-the-devils-bridge-railway/  It had been abruptly curtailed on the return journey by its derailment near Nantyronen.

On this year’s journey ours was a special, stopping train, which halted at every station along the route. The passengers, members of the Cardiganshire Horticultural Society and the Ceredigion Welsh Historic Gardens Trust were bent on visiting the latest developments, – newly planted railway gardens at each of the stations and halts along the line. 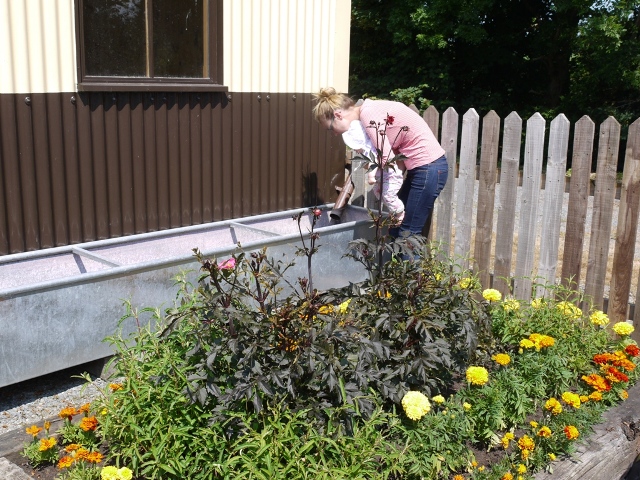 The whole operation has prospered under the charitable trust which bought the railway from British Rail twenty five years ago. There is a substantial new engine shed with brick built gable ends near the station at Aberystwyth, and an attractive private car park dedicated only to Rheidol Railway travellers. At every halt the station buildings have been smartly restored and painted in the railway livery of cream and brown. At Aberffrwd one can play at stationmaster with the old telephone and ticket shelves in the corrugated iron and pitch pine building. At other halts a newly installed but tastefully gothic corrugated iron shelter protects waiting passengers from the elements. The latest initiative has been to create gardens such as might have been tended by proud stationmasters along the route. These have been planted and tended by local volunteers.

At Capel Bangor we alighted near a raised bed margined by railway sleepers planted with Victorian formality. French marigolds in yellow and orange framed taller plantings of pink cistus and the statuesque Bishop of Llandaff dahlia. The line divides to serve both platforms here, and they are adorned with stout barrels. I particularly liked the one containing a standard bay tree underplanted with brilliant red geraniums which echoed the signage on the picket fence beyond. 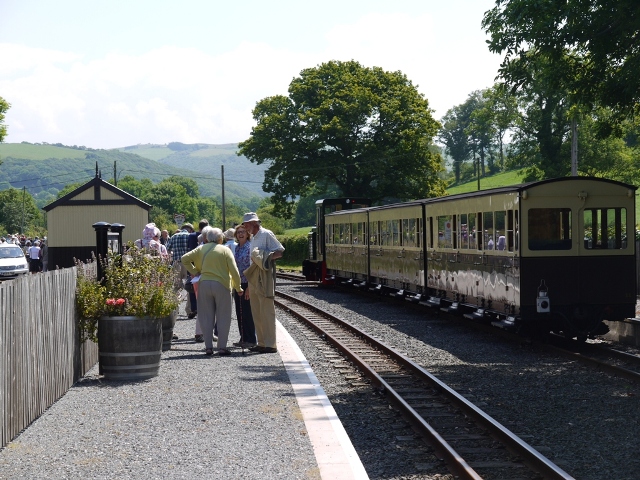 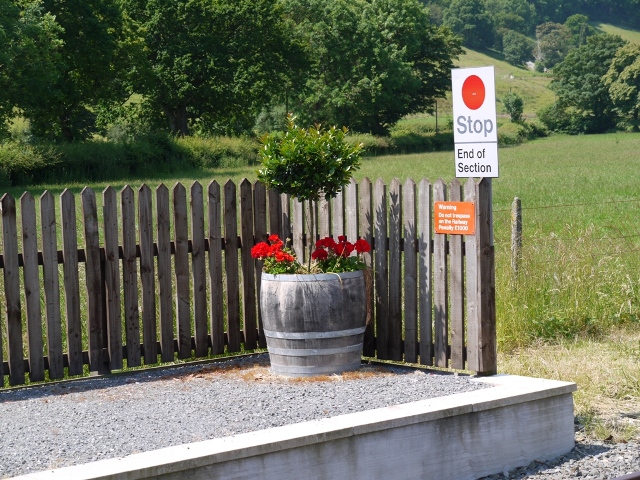 At Nantyronen the French marigolds were to be found again, but this time in long raised troughs along the platform and interplanted with verbenas and other bedding plants. 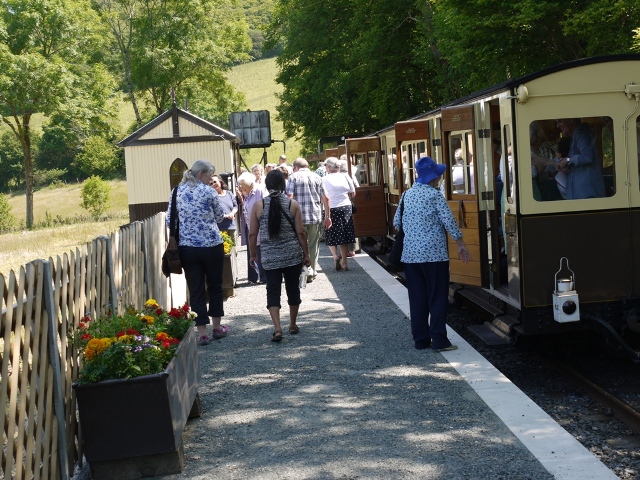 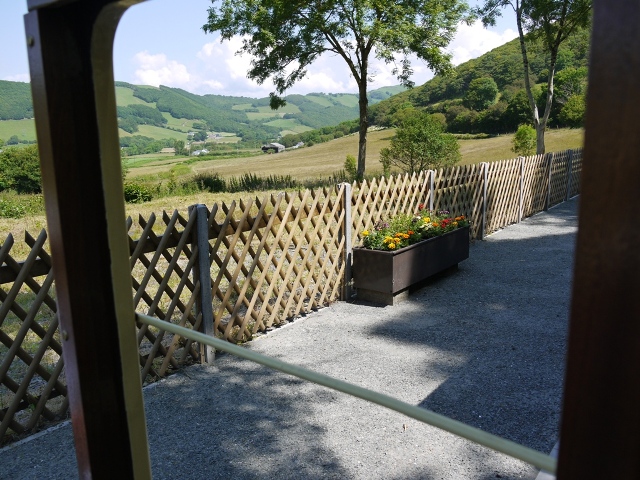 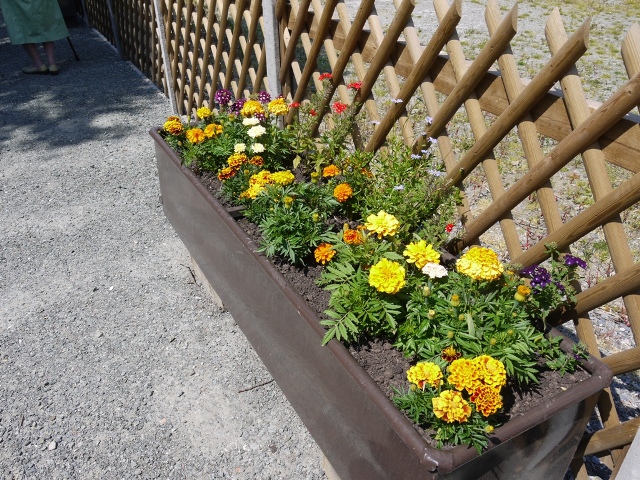 At Aberffrwd a more ambitious border between the platform and the fence was planted with perennials, Canterbury bells, peonies, astrantia, Erisymum ‘Bowles Mauve’ and Japanese Anemones.

Here the volunteers were distraught, on the eve of the station’s official re-opening by Tourism and Transport Minister Edwina Hart, to find that many of the flowering stems had been snipped off some 10inches above the ground. Close inspection revealed rabbits to be the culprits, apparently reaching up to nibble off the flower stems and eat the flowers.   Hasty replanting with colourful osteospermums filled in for some of the losses. Rabbit repulsion in a rural area remains a challenging goal. 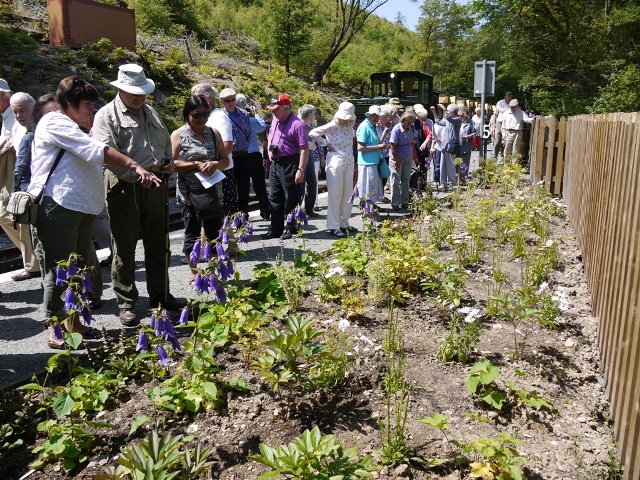 Inspecting the border at Aberffrwd 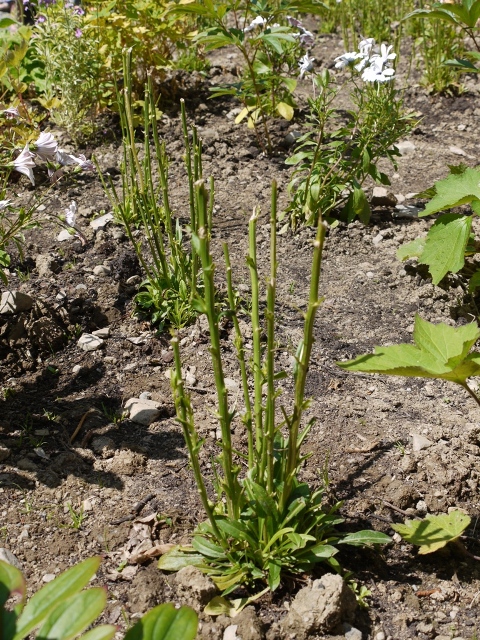 Less toothsome to rabbits and very much in keeping with the landscape is the slope on the side facing the platform, which has been planted as a sedum bed, in which the name of the station is spelt out in white painted river stones. 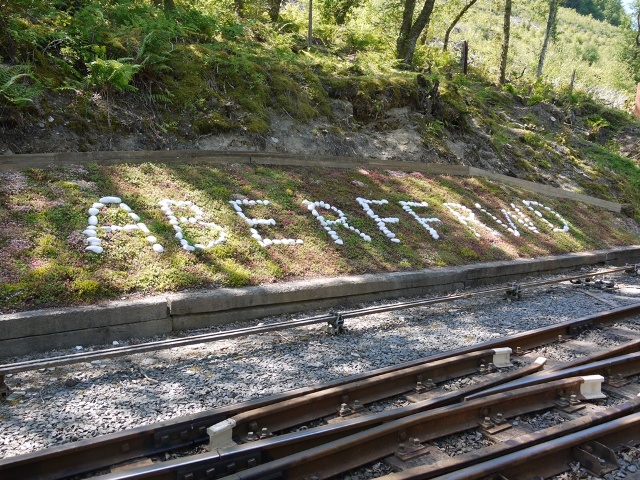 The line divides again here, and it was nice to watch the downward train exchange batons with our driver and continue on its way. 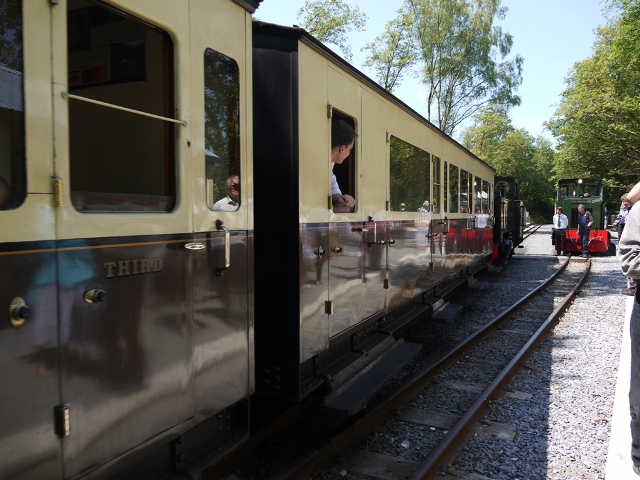 Trains pass the baton at Aberffrwd

We paused at The Rheidol Falls stop, to see the azalea planting and a clematis montana which will soon gallop exuberantly along the fence. 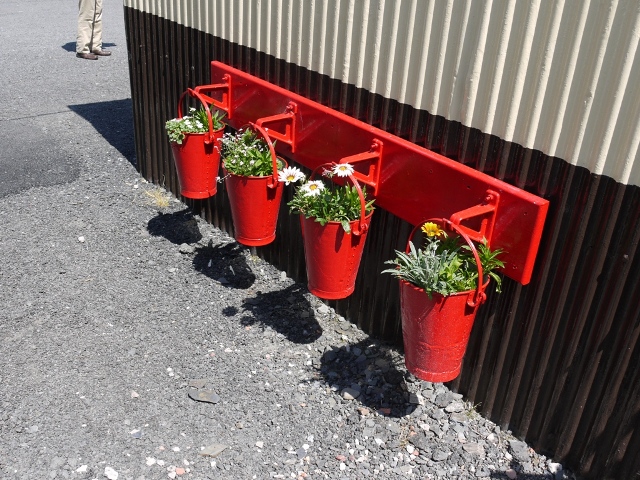 We dismounted at Devil’s Bridge to find four red fire buckets planted with gaudy gazanias. After a lavish lunch at the Two Hoots Cafe we rattled back down to Aberystwyth with just a pause at Rhiwfron, the other high altitude stop. Here the visitor looks out northward across the valley to the cream and gold spoil tips of mining on the other side. A hundred years has not diminished its mineral toxicity, and only a few trees have gained foothold on these slopes. 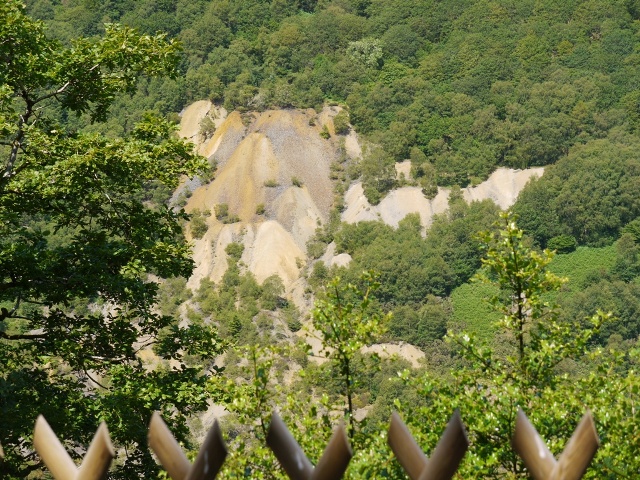