Last week I was out in my pyjamas at one o’clock in the morning kicking a badger in the ribs.  Which may surprise you since I am in general a tolerant animal lover.

The story begins at about 11-30pm when my guests, recently retired to bed, complained of extremely odd sounds from the quiet lane below their window.  Not, they thought, a cat fight, but a worrying assortment of groans, barks and guttural mumblings.  A car had drawn up and then driven on.  Our family dog had barked within the house.  And the strange sounds continued.

Armed with a torch I went out to investigate.  All was silent, but as I approached the entrance to a field gate I saw a great ball of fluffed out brownish fur.  As I approached it, a sleek young stripey-headed badger detached itself from beside it, and slipped under the field gate to run up the field.  The lump of fur though scarcely moved.  It seemed to scrabble forward with its front feet but the hindquarters dragged on the ground and after a few inches it lay still.  I considered the scene for some time, guessing that the injured badger had perhaps been struck by a car.  It was certainly in shock and shivering.

Reporting back to the family, I described the scene and suggested that the large motionless badger would shortly die of its injuries.  Both the practicalities and the ethics of mercy killing a badger seemed daunting, so we went to bed.

But it did not die quietly.  Soon the grunting and groaning resumed and I rose once more, arming myself with a clump hammer, and thinking that if the badger still lay paralysed and groaning I could perhaps knock it on the head and put it out of its misery.  I went quietly down the road with a torch. The sleek young badger was back, sitting companionably with its back leaned against the older animal , and 50 yards down the road by the light of the only streetlight I saw another young badger running towards me.

As I approached the gateway, companion badger again squeezed under the gate and ran up the hill, but this time old badger was on its four feet, moving around a little.  It seemed a bit dazed but showed  no obvious injury other than some blood around its nose.  Perhaps, I concluded, it was making a recovery.  The clump hammer was stood down and I went to bed once more.

Noise abatement was not achieved.  If anything the gutteral squawks and groans increased and at One a.m. came the sound of a heavy body or bodies colliding with our dustbin.  It rattled back and forth, just failing to fall over.

So up I got once more, dragging on jeans and jumper and running down the road.  And there, beneath the streetlight some 25 yards from where my injured badger had been sheltering was it and a young assailant, locked together and snarling, rolling and dragging one another too and fro in the middle of the road.  Doubtless it was they who had almost toppled the dustbin.  So on the principle of siding with the under badger, I kicked the young attacker in the ribs and chased him 100 yards down the road.  My guests lay in bed transfixed by my yells of  ” Bugger off!  You’re making too much noise.”

Returning, I expected to find injured old badger, released and lying exhausted in the road.  But no, his walking ability had clearly returned and I found him stubbornly back at the field gate where I had first found him. Unlike his slighter young associate he did not seem minded to squeeze under the gate, so I climbed upon it, released the farmer’s wire, and opening it wide over the sodden earth, I poked my badger with a stick until it reluctantly went through into the field.  It trudged off alongside the hedgerow, and I went to bed.

I sat up reading websites about badger social behaviour.  Was our field gateway at the margin of two territories?  Was the companionable badger one of its social group, sitting up against him to share fragrance from his rear scent glands.  Was young badger in the road a warrior from the adjoining tribe down the way?

It’s hard to tell.  But at least the young fighting badger did not return after my blandishments, and the old badger was nowhere to be seen dead in the hedgerow the following day. 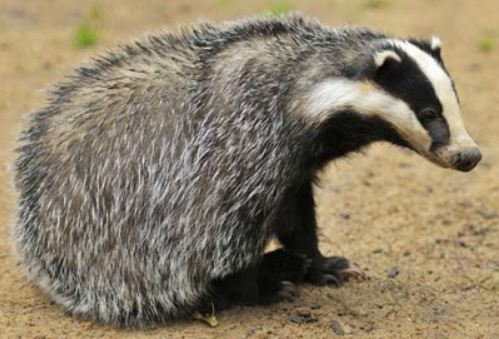