Helen Palmer at the Ceredigion County Archive has drawn to my attention a new acquisition, a little white calf-bound volume which once belonged to Hafod’s famous daughter Mariamne Johnes.  Pasted inside the front cover is a handsome bookplate and, apparently in her own hand, her signature Mariamne Johnes 1801.  She turned seventeen that year. 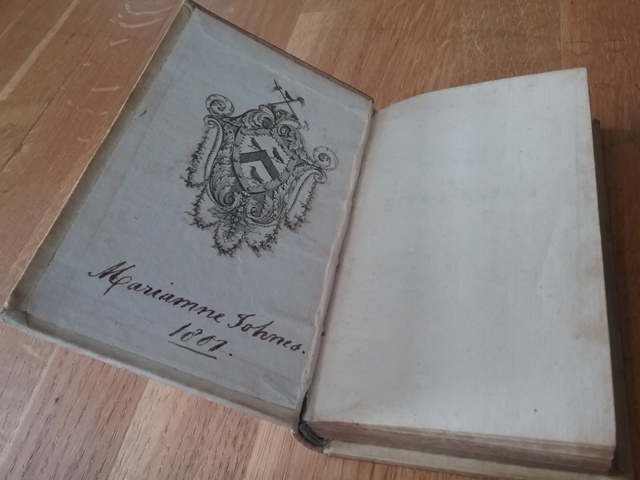 The shield at the centre of the bookplate shows the Johnes arms, which are described as “argent a chevron sable between three revens proper, within a bordure gules bezantee”.  The floriferous drapes around it are perhaps embellishments for a ladies collection. 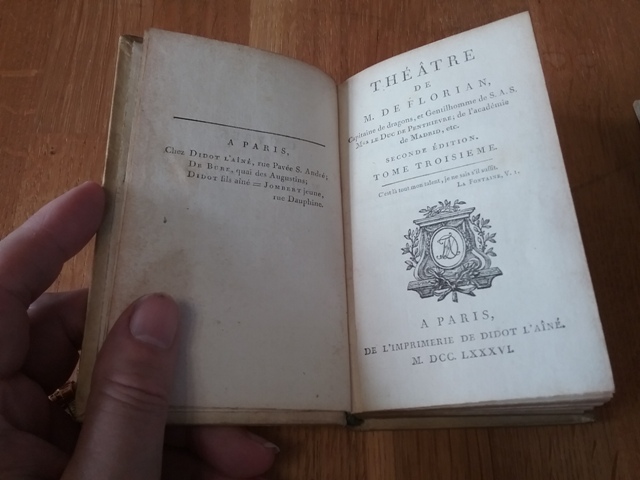 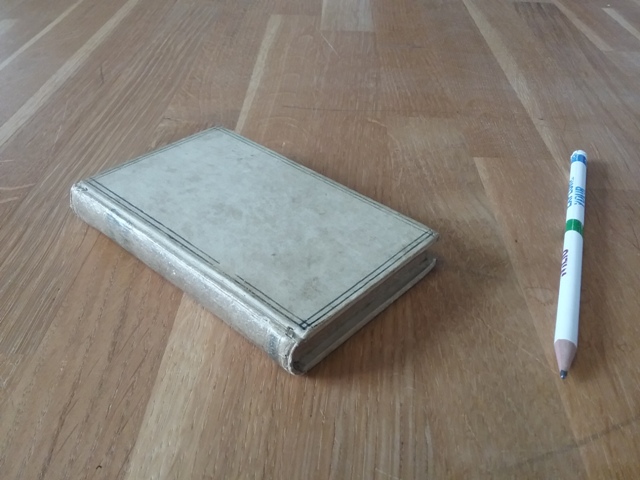 The seventeen year old Mariamne in addition to her botanical accomplishments which fuelled her friendship and correspondence with Sir James Edward Smith, was being trained in the appropriate skills of a young gentlewoman: watercolour painting, languages and music.  The only known portrait of her is an ink and wash sketch, dated 1804, by George Cumberland.  It depicts her standing and presumably singing for her Italian music teacher Signor Viganoni. It is nice to imagine her reading and perhaps rehearsing her french pronunciation with this little book.

This little volume, Theatre de M.de Florian contains three short plays, and I spent the afternoon perusing the first, which was entitled  Jeannot et Colin, Comedie en Troi Actes en Prose. First performance 14 November 1780.    It evokes a time when gentlefolk might themselves put on a little performance in the drawing room.  The cast consists five principals, and a couple of servants, the bailiff and the valet.  As comedies go it was neither racy nor particularly funny, but it explores the sedate themes of class, wealth and marriage.

Up from the country, the Auvergne, come bourgeois Colin and his sister Colette, wishing to renew acquaintance with their former friend Jeannot, who had been Colette’s sweetheart until he and his mother departed that region.  Now living in Paris, Jeannot is  a free-spending Marquis, and his mother the Marquise has plans to marry him to the Comptesse de Orville.  Colin and Colette’s arrival at their door promotes some unease, and subterfuge, mediated by the Jeeves-like valet, to prevent a meeting.

Of course they do meet, and Jeannot’s love is immediately rekindled for the modest and lovely Colette.  By Act II he explains his predicament “ I am the unhappiest of men, I depend upon my mother, my fortune is her achievement, I owe her everything, I owe her the sacrifice of my happiness”.  He must marry at his mother’s direction.

Fortunately in Act III it turns out that thanks to a lawsuit Jeannot and his mum are about to lose all their money, and their friends no longer wish to know them.  Nor does the Comptesse de Orville, who hasn’t found Jeannot very agreeable at dinner. So true love triumphs and it turns out that Colin can reunite the Marquise with her country property in the Auvergne, and Colin, to boot, is a successful manufacturer who can pay a fine dowry for his sister.

It is a curiousity of Mariamne’s life that despite her father’s conspicuous wealth and status, there is no surviving evidence of any suitors. We do know from Thomas Johnes’ letters that Mariamne suffered bouts of severe ill health from the age of ten: fevers, rashes, tumours and a curvature of the spine for which she was for a while fitted with a back brace.  But for much of the last ten years of her life  ( she died at 27)  she seems to have been in reasonable physical health, walked long distances, and visited Bath Bristol and London with her parents.  Possibly small romantic volumes such as this one served as the Mills and Boon of the day.